I splashed her in the huge Jebel Ali Port, one of the biggest in the world.
The quaysides are about 10 feet high from the waterline, and it’s pretty nasty tying up alongside with big vessels passing. The bow waves can smack you up against the dock and easily damage a small boat.
A brand new 50ft stinkpot was badly damaged a few weeks ago in exactly this way when a tug passed too fast and really smashed it up against the quayside. The boat rises, and as she drops, the fenders ride up the quay and land on deck…

After a few anxious minutes trying to start the engine, she fired up, and I was able to motor out of the port - minus mast and bowsprit, and from there, out to sea for a couple of hours trip around the Palm Island with the monstrous pink Atlantis Hotel perched on the end, to my berth in the Dubai Offshore sailing Club.

I had only two days before having to leave for our family home in France where I’m writing from, and managed to get the bowsprit back on - (I hate to see her without her proboscis) and mounted the windvane and solar panel.

I put the windvane on before realizing that without the mast being stepped, the extra weight on the boomkin wasn’t supported by the backstay, hence the temporary line from the boom gallows you can see on the photograph.

I get back on the 24th, and hope to be able to organize a crane to step the mast straight away.

The sailing season is starting again this month after the brutal heat of the summer, and I can’t wait to get those tanbark sails up! They’ll be the only ones I have ever seen in this part of the world.

As a new BCC owner, I’m going to be going through the familiar agonies of decision making regarding the treatment of the bulwarks, boomkin and coamings that everyone here has no doubt seen aired on the forum many times before …

I really want to avoid painting at least for couple of years, and really don’t know what to use for the mahogany in this aggressive UV and high temperature and humidity.
forgive me if I bother you all with this in the coming weeks.

The first photograph is of the boat in Svendsen’s yard in San Francisco with the PO and now my good friend John Purins. (I’m the one without the five o’clock shadow

All the best to all of you. 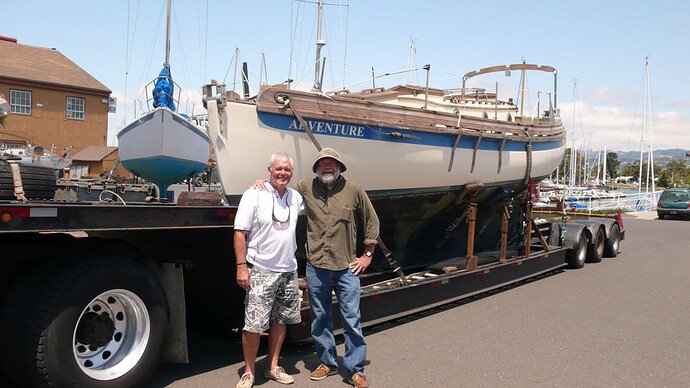 Considering the intensity of the sun in Dubai, I would paint the bulwarks, taffrail, bumpkin. On the rest of the wood, I would build up about 4 coats of varnish, then paint over the varnish. The varnish protects the wood from the paint and allows one to bring the wood back to bare wood without the fear of paint entering the grain. If you want to use just varnish, you will be splashing two coats of varnish over the wood every 2-3 months.

Enjoy the sailing season. If we can of any help, post a question.

Well you probably know my thoughts on the bulwarks…can’t comment on how it handles the UV over the long haul yet, only been one short season so far. I did CPES on the bare wood, then AWLGRIP. The rest I varnished with one of 2 products: Epifanes or Bristol Finish, and sometimes a combo. I have covers for everything though. However, I am noticing some crazing/cracking over the black caulk on my main sliding hatch which was done with Epifanes over Life Caulk Type P 2 part polysulfide.

Thanks for the replies guys - what about using Honey Teak on the bulwarks?
Ben , you used it on your sprit didn’t you?
How’s it doing?

Gary (Shanti) used it on his sprit, I used it on my drop boards. It’s good stuff, had it on my old boat, held up very well. I just got annoyed with the ordering process and the price. Comes out a little more orange/amber then regular varnish, hence the name honey – but looks great.

Some pics of my old boat, with Honey Teak:
http://beneriksen.com/chamois/

Hi Ben - Good photographs of Chamois - you seem to have done a great job on her.

I realize that especially given the aggressive weather conditions of a Dubai summer, logic would come down on the side of using paint on the bulwarks, but being in the heady honeymoon mood of new BCC ownership, I’m ready to put up with the work just to see her looking as good as she could.

Unless everyone advises me that the Honey Teak is a big mistake, I’m kind of leaning towards using it.

As far as I can gather from your experience and others, it seems relatively easy to apply, and hardwearing.

I figure I can always paint later, if and when the reality of endless varnishing hits home.

Did you use a bondbreaker with the Life Caulk polysulfide? If so, what did you use? I’m about to re-caulk my sea hood and tried to order Boat Life’s bond breaker but was told that product has been discontinued.

I just repaid the deck seams one IDUNA’s companionway hatch. We use 3M’s fine line tape as a bond breaker. It is made in various widths from 1/8" and wider. The 1/8" works fine. To removed the seams, we used the Fein Multimaster tool with seam removal attachment - highly recommended. Once the caulking was removed, I used 80 grit sandpaper wrapped around a tongue depressor to sand the seams.

We did this job in 2003 but after 4 years the Boatlife Type P polysulfide caulking failed - see photos. The caulking cracked, shrank, became sticky and soft. This only happened on section exposed to sunlight. The section under the seahood appeared sound. The seahood was also caulked at the same time as the hatch. This still looks new. BoatLife has been less than sterling about this problem. My understanding is Detco two-part polysulfide is a better product than Boatlife’s.

Detco is available on the West Coast but not the East Coast, hence I used BoatLife’s Type P again. 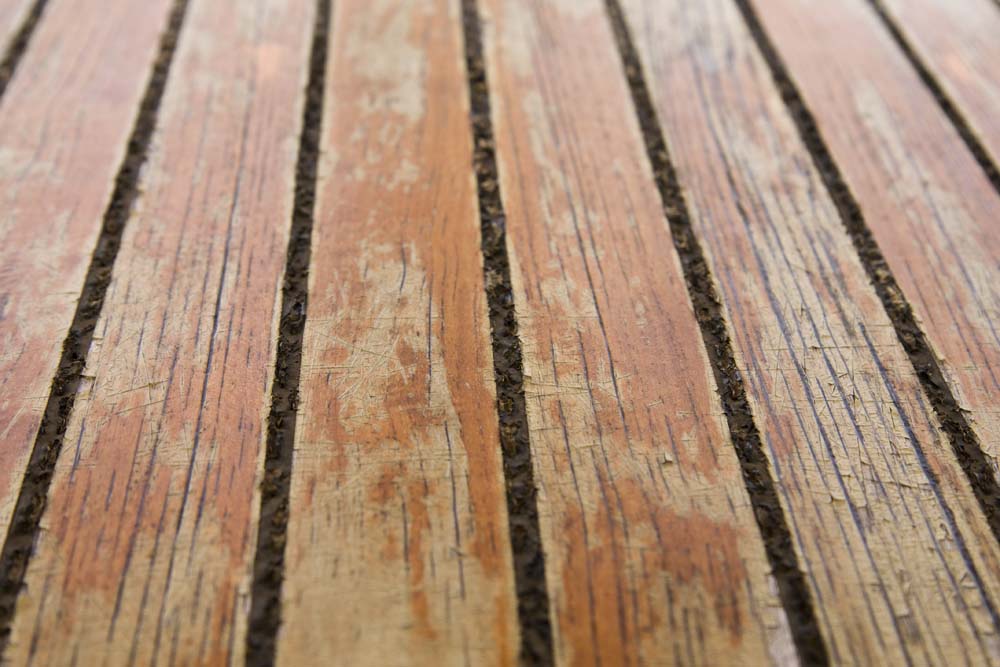 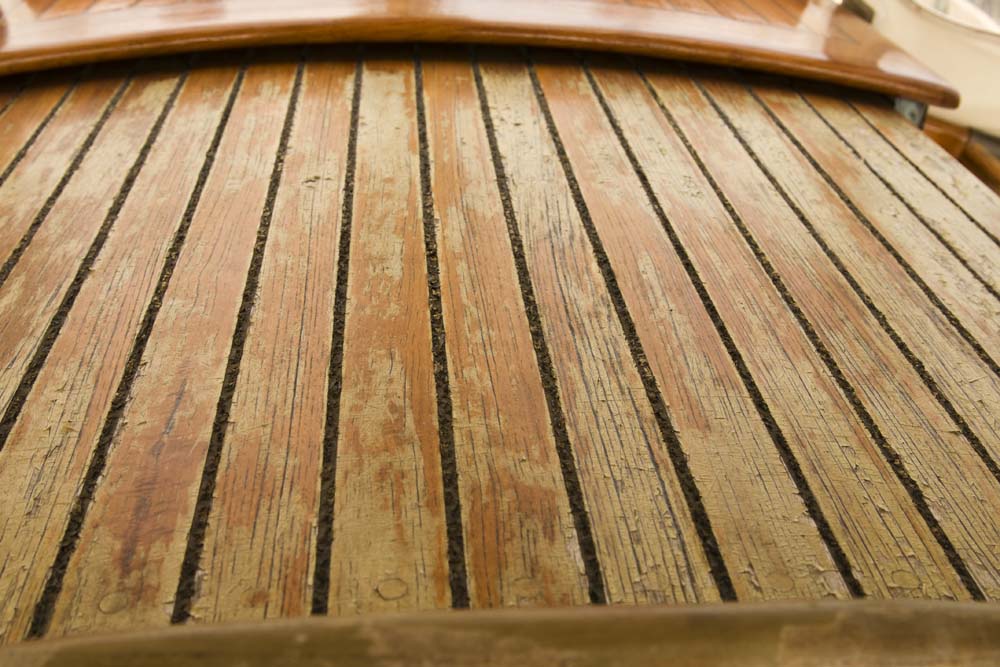 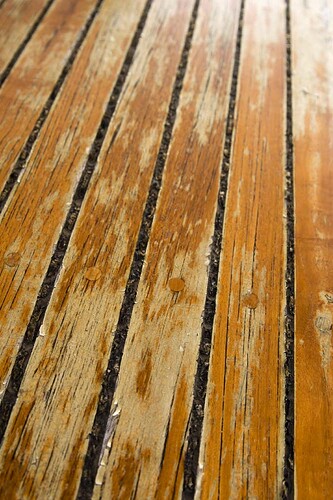 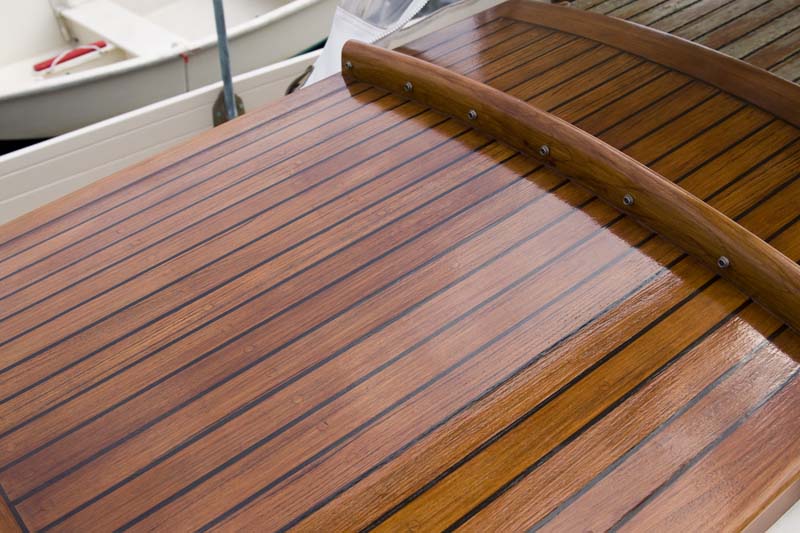 I got the boatlife bondbreaker from jamestown distributors. I’ve also heard you can use fineline tape.

My Type also shrank and I’m not happy with it for that reason alone. If these cracks continue to be a problem, then the product is a total bust. I used 1 part Life Caulk on another hatch, and it didn’t shrink.

For the one-part polysulfide did you use BoatLife or 3M 101?

If the batch of Type P I used cracks or shrinks, I will caulk the seams with Sikaflex.

For the one-part polysulfide did you use BoatLife or 3M 101?

If the batch of Type P I used cracks or shrinks, I will caulk the seams with Sikaflex 290DC.

“The Sikaflex?-290 DC adhesive system was developed specifically for teak decking materials. This product makes the joints of decking completely water tight and weather resistant. Extremely easy to use, this one-component polyurethane compound is semi-fluid for consistent
joint filling properties. It can be sanded flush with the deck when cured to give a beautiful neat, clean finish. Besides its excellent sealing
qualities, the Sikaflex?-290 DC caulking system provides anti-slip properties to a wet deck.”

“Bonds and seals in one application
Designed specifically for the marine environment
Resistant to weathering and salt water
Non corrosive
Can be sanded and overpainted
One component, - simple and easy to use
EU wheelmark approved for marine use”

we can compare in 2 weeks

AND EAT SOME CRABS!

Thanks for that information, Rod.

I am actually not re-caulking, in that I rebuilt the seahood and have new teak that has never been caulked. After all the time and expense that I’ve incurred, I want to ensure that I do the job properly. For that reason, I was disappointed to hear about your experience with the Boatlife product, as that is what I was intending to use. I’m curious though as to why your seahood has survived so well, given that it must be exposed to the sun.