For awhile now I have noticed a rust stain bleeding from the bottom of the bobstay fitting. That indicates to me there is some internal corrosion going on under the fiberglass. It can not be inspected from the inside of the boat as it is completely sealed with fiberglass. My question is how concerned should I be about this. Has anybody had a similar problem. I remember Ben on Elizabeth replaced that fitting. I am tempted to ignore it as a minor issue but not sure if something much more serious is lurking within that fitting.
Thanks,
Ron Thompson
Ho’okahiko 97

If it were me, I would pull the fitting. I have pulled SS all-thread on a Falmouth 26 and on a custom built Flicka. The all-thread and nuts looks fine on the surface but the part that was inside the wood, (bowsprit and coamings) was wasted away because of corrosion. If stainless steel is deprived of oxygen, it corrodes ready in a salt water environment.s That’s my experience with stainless steel.

If it were me, I would pull the fitting. I have pulled SS all-thread on a Falmouth 26 and on a custom built Flicka. The all-thread and nuts looks fine on the surface but the part that was inside the wood, (bowsprit and coamings) was wasted away because of corrosion. If stainless steel is deprived of oxygen, it corrodes ready in a salt water environment.s That’s my experience with stainless steel.

Thanks Rod, The only safe thing to do is remove the fitting and do a good inspection. Otherwise I’m just guessing about the severity. I do know it’s been bleeding that little bit of rust stain for at least 5 years.

In my opinion, a wise and prudent decision to pull the fitting.

On both my Falmouth and now Shanti, the stainless started going bad at 20-22 years. I broke a bomkin chain plate at 21 years. But had hot exhaust water spraying it. Also note that my boats are in the water year round in S Cal or the Caribben.

I pulled Itchen’s bobstay fitting a few years ago because I was
worried by rust stains and what I thought might be the beginnings of a
crevice corrosion crack but which turned out to only be a knife
scratch. I had a local machine shop polish it out and refresh the weld
while he was at it, and then I reinstalled it with extra attention to
getting a good seal where it penetrated the hull, to minimize the
likelihood of oxygen-starved crevice corrosion. Bottom line was that
in fact it was perfectly sound – but I now am confident that it is,
and it is good not to have that worry in the back of my mind. Was not
too big a job once I had all the stuff cleared out of the forepeak. I
used a Fein Multimaster to accurately and quickly cut away the
original fiberglass bond to the hull. In my opinion, rust stains in
themselves are not much of an indication on way or the other of
significant damage to “stainless steel” - crevice cracking and
inter-granular corrosion are the real danger, and there is lot’s of
literature available online regarding the particulars.
Scott

Scott,
That’s very interesting what you discovered. I will do the same even though the fitting is probably okay. It will be worth the peace of mind to know it is structurally sound. Thanks for the info on the Fein Multimaster to do the job without making a mess of it.

I had rust stains running down the stem from one of the bolts securing the gammon iron, and from a lower bracket of a Fleming wind vane strut. I took out the bolt in each case and they appeared to be fine. Cleaned them up and rebedded them. So I guess rust doesn’t necessarily mean structural problems, but I’m always going to check it out when I see it.

B T W , knowledgable marine surveyers say to never hang anything structural on a weld !

This bobstay C/P is from BCC Calliste # 72 , it was berthed in Honolulu for it’s early life , late eighties to mid nineties and was replaced in Oz 2001, because of weld cracking and poor design. 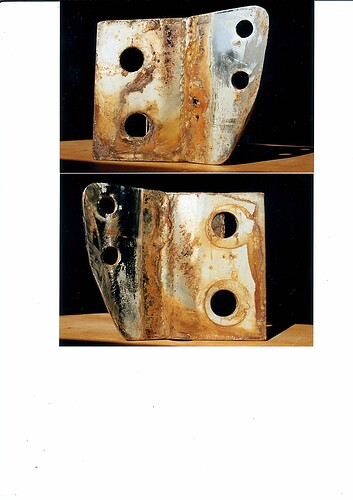 Yes, Douglas is right - stainless steel either has to be 100% excluded from contact with seawater or open to contact with oxygen.

I owe big thanks to Douglas of Calliste for sharing with me the simple trick of running a bead of sealant around the bobstay fitting, where it emerges from the GRP.

Each time I haul Zygote, I remove that bead and check to see if any rust stain is present, indicating whether seawater penetrated the junction between the sealant and the ss. So far (12 years, most all in tropical or subtropical water), no problem. After checking, I polish the ss and run another bead of sealant around.

That’s based on the idea that the bead of sealant becomes a dyke to stop seawater working its way into the GRP embedding the bobstay fitting. If the sealant does its job, water and chloride ions are excluded from the embedded portion of the bobstay fitting.

Ahoy , Bil , you are definately cluded in !

I don’t know what happened to the study - evaluation of why those European sailing boats , Swan’s , were loosing , their rudders , on that passage from Europe to Panama ???

Come to find out that those rudders carried away right at the interface of the SS shaft as it exited the rudder laminate !

The US Coast Guard had similar problems with their rudders , they first thought that the salt water that got inside the rudder pipe/ caused corrosion from inside the hollow shaft , like we all know , SS doesn’t like , “stagnant Salt Water” , any where near it !

So , the C G , filled their rudder shaft tubes with fish oil , in thinking this would preclude any further SS corossion problems , but they missed the idea , that “Bad Design” was the fault , ie: the SS shaft was potted in their rudders ! NOT , A Good Design Idea , because, that leads to failure at that critical joint !

When this SS potted condition can not be avoided , like our lower SS bobstay C/P daylighting , at the stem , there is an acceptable technique to inspect that SS and determine if a failure is imminant , or at least , partically so !

We actually never expect a SS structural failure on our boats , but when SS gives way , there really is no advance warning , unless you see corrosion in the form of rust , draining from a fitting ! What is that saying ??? "Fore Warned is Fore Armed !

Bil , you have exposed the only way to visually check and expose a critical corrosion joint problem with "Potting " SS ! Good On You , Mate !

Any Good Surveyor , worth his fee , will comment , as to just when the last inspection was certified , on boats , that have SS potted , structural fittings , like our lower SS Bobstay C / P !

Thank Goodness , Lyle , designed our boats with outboard , transom hung rudders , every bit , can be inspected from outside, there is a V good reason for this design , it’s called , " Engineering Safety Factor " !!!

B T W , this attached photo is of a cast bronze lower bobstay C/P , made at Port Townsend Foundry, and is a copy of what is installed on Calliste.

I like it because of two major reasons : it’s tail goes down below the water line , thus creating a passive ground to the mast head , and it is visually inspectable at any time . 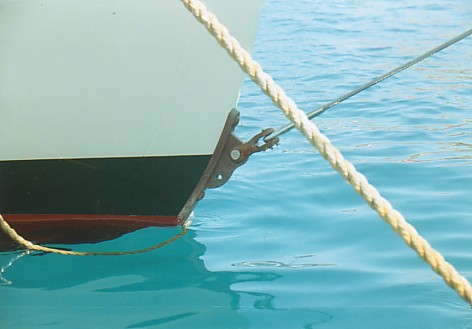 Douglas you hit the nail on the head. That bronce bobstay c/p is hands down the best way to go. Over the next year I will be replacing all my chain plates. I am seeing signs if crevice corrosion now after 24 years. Will be using bronze through out.

Aten’t you a member of the “I hate stainless” club too?

Ahoy Gary , I would rather say that I am a fan of your photography , than a SS hate club member , but you have hit on subject near and dear to my heart .

SS can be used successfully , “Sometimes” , but not always !

I replaced my factory installed SS C/P’s with Manganese cast bronze C/P’s, from P T Foundry, that after my pre-purchase surveyor said in his report, to replace all my onboard SS structural fittings , as my BCC was 10 years old and lived most of it’s life in Tropical Hawaiian waters.

First voyage after purchase , plan , was a North Pacific crossing to Seattle. Preparation for this voyage included pulling the mast, replacing all the SS 1 X 19 rigging wire and terminal ends , during this process, and after polishing the SS C/P toggle pin hole areas , I noticed "spider-web " like cracks eminating from those midship clevis pin holes, not good !

Now that the dust has settled , I would reccommend, replacing most of the BCC C/P’s with Aluminum Nickle Bronze plate stock , bent to conform to the hull curvature . L & L decided to make their C/P’s extra long to extend below the water line , for lightning ground protection , another good idea from them .

Since Pete Langly at P T Foundry , has the mold pattern for the BCC lower Bobstay C/P , I would ask him to cast it out of Aluminum Nickle Bronze not Maganese bronze , if I was ordering a new one .

A positive for SS is the Aquamet 22 SS prop shaft that was installed in San Francisco , 1996 , it is blemish free for 16 years , now, and not a sign of any worm hole or crevice corrosion , money well spent , I think !

Ahoy Barefoot , Lightning protection is a subject , that is illusive .

Here in Singapore , insurance companies charge extra premiums, because they think this place is the lightning capital of the world .

I know of a few sailboats around here , that have had lightning strikes to their aluminum masts.

L & L had to be extra cautious about lightning hitting their wooden mast , because their mast would explode , by moisture in the wood turning to steam and expanding during a direct strike . Aluminum masts don’t explode , like that !

My understanding which could be completely wrong , is that a good lightning protection system for a mast, would be when the top of the mast has exactly the same grounding reading (potential) as the surrounding water.
To do this on our boats, there are a number of ways, but most ways depend on a large wire connection from mast top to a large ground plate underwater.

So is your SS stem fitting underwater ? Would it pass for a large ground plate ?

Yes its under water but I’m guessing it wont really act like a huge grounding plate. Attached is a picture of the fitting, it goes about 5" under water. 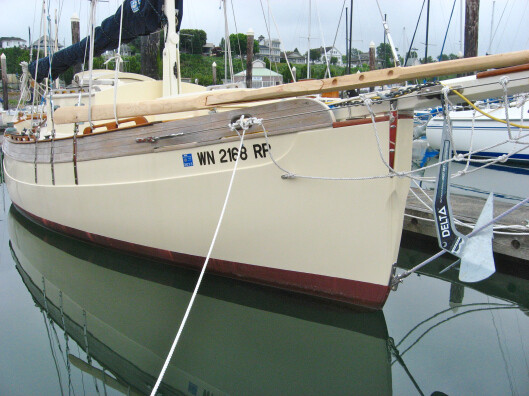 Ahoy Barefoot, sorry that I am not knowledgable about lightning protection for our boats , can only relay what I have heard in seminars given by people like L & L , John Neal , Brion Toss and Carol Hasse .

However there are excellent sources on lightning protection equipment, on the internet .

SS is not considered a good electrical conductor for a grounding system , but neither is wood .

I have seen some boats with a v heavy copper wire connected to a copper pipe , and deploy this over the side amidships and clamp the wire to the cap shroud, for use in port or lay-up at a marina berth . I don’t know if this system works !

I am interested in your Yuloh Oar, so will you give us your evaluation on this forum under “Deck Hardware” catagory , and some photos of it in use ?

I’m almost always alone when I use it but yes I will get pictures and info up here, it was a gift made by my friend Mathew who sails a beautiful Hess 26 he has a sculling oar but is so pleased with the Yuloh that he is making one for himself. I have to say being engine-less is pretty scary, I have for fear about leaving the harbor than I do of sailing down the west coast from Wa to Mexico next year.