I have searched and found there are differences between the SLM and the CC bulwarks. Are there also differences in the SLM bulwarks. I see two different styles, both boats i believe are SLM builds.

If someone can clarify that would be great.

The stanchions supports for the bulwarks on the CC built boats are bronze castings and the bulwarks were milled from lumber. The SLM stanchion supports are wood and stainless steel thru-bolted. The bulwarks are constructed from wood on the SLM boats. There are pros and cons to either construction method. Is one better than the other? Probably not.

The main difference between the CC boats and the SLM built boats is plywood coring is used in the decks and cabin of the SLM boats and the CC boats were built with balsa coring. Is one better than the other? Probably not but then that depends on which builder lists the pros and cons.

I believe most of the CC boats use teak decking over the GRP decking. If the decks have not been maintained, this can be a source of leaks and core rot. We have a CC built boat. Our boat was custom finished and the owner/builder epoxy bonded the teak decking to the GRP subdeck I suspect this is one of the few BCC with bonded teak deaking. Further the teak decking was/is maintained throughout the history of the boat.

I will add, the other difference is our bowsprit is 6" longer than the bowsprit on most of the SLM boats. Considering the boat is over 20 years old, I am proud of this fact.

Ok, very good. thanks for that info, and your videos also, i love your little pin rail!

Any difference in bulwark height between the two? Ive seen some bulwarks with something akin to a rail cap. Rod, your bulwarks seem to be the standard. These bulwarks pictured here seem to be quite different. Also scupper design looks different. This is reported to be a SLM build. 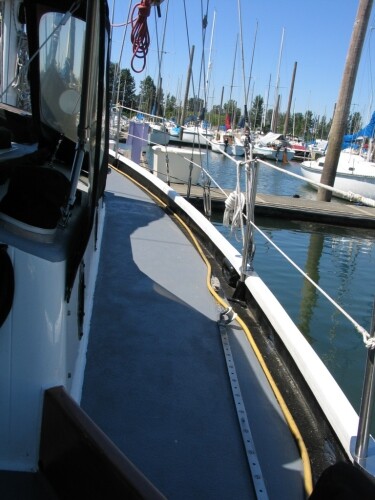 I’m sure Kate from Roguewave will chime in on that picture - it’s one of Morning Star, one of the boats they are representing, right? If so, that was an owner finished boat and if you look through the pictures, you’ll see many things that are slightly to far different than factory finished boats.

Ahh good point, i should just ask Kate, we’ve been in touch about Morning Star, and other boats recently. Interesting that bulwarks can be “optional” or one of the owner finished items. I suppose i was thinkin about wooden hulled ships, where the frames carry on past the deck to become the bulwarks, and so are more integral to the hull. But i guess in this case, you can build the hull, and then add bulwarks later.

You are right in that the SLM bulwarks are made to look like those on wood framed boats. But in actuality I believe that in real wood boats the frame itself was not continued through the deck, but instead a sort of short sister frame was used extending from a foot or so alongside the top of the frames to above deck to become part of the bulwark. I’m not sure of the reason for this ‘extention’ unless the thinking was to have the frame itself stop just below the deck and make the decking job easier where it passed over the frames. A hole could then be cut through the deck and the short bulwark support fitted through it and bolted ‘sister’ style to the frame itself.

Another reason might be to avoid any rot forming in the bulwark from spreading directly into the frames of the boat and weakening them.

One thing about the raised toe-rail area on Morning Star is that it must be a lot easier to maintain than the plank-on-stantion style bulwark. Of course it also isn’t nearly as good looking. But then I am prejudiced against those BCC’s that do not carry the designed wale strakes three planks down the hull as Hess wanted them…and again adds so much more a pleasing look than those that simply add a narrow rubrail with a painted out area below it where the wale strakes belong. 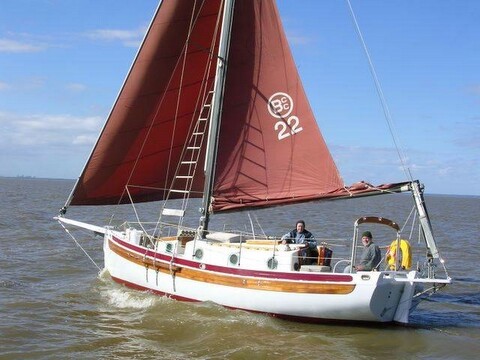 Cool, thanks Stan. What was the deal with the Whale Strakes? Why some have it and others dont? Was that an option? Don’t see any mention of it in my 1996 brochure.

You are working from a 10 year old brochure. The whale strakes are an option. The 2005 base price for a new BCC was about $315,000. Yep, that’s a lot of money. Some may say, wow the builder is making a big profit. Based on my research there is very little profit, if any, building high quality custom boats such as the BCC.

P.S. Stan, based on the image you posted of Wax Wings under sail, she is a beauty. Of course, I would have not expected otherwise.

Thanks for the response Rod.

I am assuming that you are addressing both the BCC Costs thread I started as well as this thread in one post.

I’ve been sailing about ten years, starting with lasers and such, and over the last five years, with friends on larger boats. A year and a half ago, we purchased a 1979 Hunter 30 and spent about five months restoring her in dry dock.

I am young at nineteen. Of course, I am not married (with no plans to be for a while!). My parents and I are wanting to purchase a boat together and spend a year or two cruising together after I have finished my undergraduate studies at the University of Miami in 2008. After our trip, my parents want to give me whatever boat we wind up with (though it’ll undoubtedly stay at the same dock) and pursue another business together now that our others are doing well (they’re thinking about reverting back to antique restoration or something else that pleases them). They currently own and run two car washes in southwest Florida - one self-serve, one full-serve. They pursued the car washes after running a parasailing and jet ski rental business for twelve years in North Carolina during the summers and Boca Grande, FL in the winters (well, the self-serve was purchased about six year into the watersports business as supplemental income for winters). As I grew up, I became more and more active in the watersports business until I was working seven days a week as mate on our parasail boat during the summers, spending “off-hours” with my Dad fixing that days broken jet skis (of which there were plenty, pesky things!) (I had a horrible youth…can’t you tell?

Now that we have been out of the business for a year and a half though, we’re finding the lack of daily contact with the water to be terribly disheartening - after spending so much time with the water as an integral part of our lives, it’s difficult to “walk away”. Rather than pursuing previous plans of spending some time in the mountains together, building a house for my parents to retire in, we’re choosing to try and pursue cruising.

As for “Are we really interested in purchasing a used or new BCC?” In a word, yes! We’ve spent hundreds of hours researching different boats both on the net and in real life and have had a chance to see a few BCCs inside and out along with many other boats. I’m sure I don’t have to tell you what caught our eyes with the boats - you own one and know. We’ve pretty much narrowed the boats we’re interested in down to BCCs and Westsnails. There are a few others that would suit us as well, but the two listed are what we like most in sailboats, with the BCC being quite a bit higher on the totem pole.

Anyway, I did not mean to imply that Sam L. Morse company has stayed in business so long by making a large profit. We purchased two Premium Custom Boats parasail boats new for $80k over the course of our “watersports reign”, but looking their final price sheet over, less than $5k was taken as a profit from the boat. (they went out of business a couple of years ago.) I can’t imagine that a boat company like SLM which has to spend exponentially more time on their boats, could do much better intake wise. That is what fascinates me - they’ve been making great boats for years for what seems like market costs, yet they’re still doing it without bowing to the trend of boat makers to either skimp or quit.

I really appreciate those of who chime in on this stuff - for those of us interested in BCCs but not yet owners, it’s great to hear your opinions.

It sounds like a grand adventure. I would say you are lucky and wish you well. You have identified two excellent boats - the BCC and Westsail. We looked at the Westsail 32 and BCC. Both are excellent deep bluewater boats. You may have already been aboard these two classes of boats. If not, I would strongly recommend all three of you visit a BCC and a Westsail, then decide if the BCC or Westsail is large enough for three adults to liveaboard for an extend period. In my opinion, the BCC is a geat boat for two people but perhaps a little small for three full time liveaboard adults. Lenora and I, by today’s generation, are small people - 5’8.5" and 5’4". The BCC works for us, but we would be hard pressed if three adults were aboard for an extended period of time. I suspect my lovely wife would be OK with this arrangement but I am easily frustrated and am impatient with people, hence it would not work for me.

Good luck with your search and I hope you can live your dream.

Yes, the “wale” strakes are optional and Iduna is probably correct in thinking they are often left off by new buyers because of cost and maintenance.

But let me say that we keep ours varnished and do two coats twice a year on the Gulf coast. It takes two hours to sand and two more to varnish each side…a small price in our book for the added good looks. But to each his own.

Good luck with whatever boat you decide on.

Were the bronze stanchion bases found on our Canadian BCC’s designed by Lyle Hess or the Canadian builder? Matt 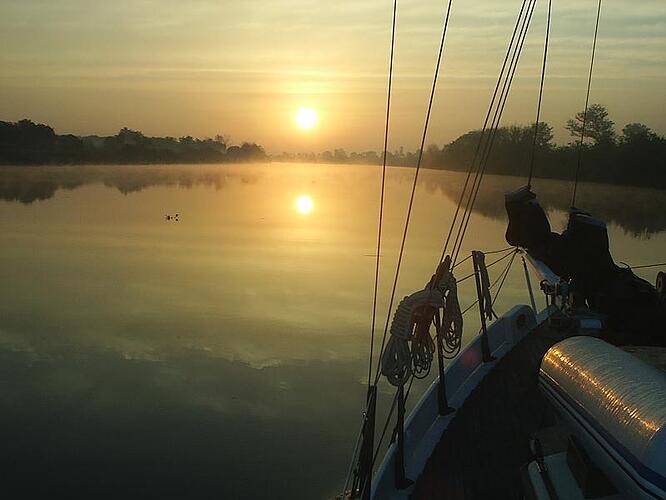