are there any pics of the double bunk in the salon set up? I cant get
a grip on how that works? Is it comfortable and does it function well
as a double, ie is it possible for a couple to get a good nights
sleep? Do you tend to use it when in port?

Agreed Ben! We have been looking at several options to set up a double birth on Cosmic Dancer. Are plans are to make a double in the forpeak which right now is a blank canvas and leave the salon the way it is. She’ll be pulled on the 4th of January to be gone over tops and tails. I would like to get some ideas before cutting into her,

The two double berths cannot be used simultaneously (well, if you added a few extra cushions you could).

One double berth is a pull-out berth, extending the port side sea berth by sliding the lee boards inboard and using the seat cushions from the port side settee as additional mattress. That sleeps 3 in the main cabin: a couple on the pull-out double berth and a singleton on the starboard sea berth. All three sleep longitudinally (ie fore-aft)

On Zygote, we use the infill double berth in most anchorages and most marina berths. The advantages of sleeping athwartship cannot be overrated: sleep is not disturbed by roll caused by wave, wake, or wind against tide.

Photos of the infill double berth, from Roger’s Nereus, were on the ‘old’ Sam L Morse Co website. And a layout plan too. I’m not certain if the photo and the plan are on the current SLM Co website. I’ll see if I can attach them - note that the layout plan shows both double berths. 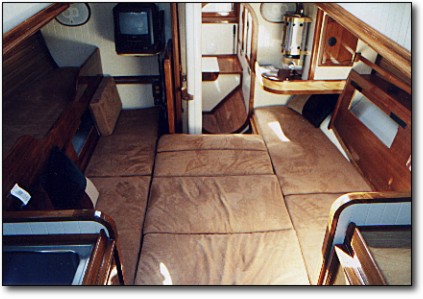