Hi Skippers, If you haven’t see the Pardeys current newsletter (March), I’ve enclosed the link here with the attachments. The reason for bringing this up is to show you that how the Windvane “evolution” continues.

For many years the Freehand has been steering BCC’s and Falmouths to far away places. I was fortunate to be at Bull Canyon when the Pardey’s were building Taleisin, back in the early 80’s. I remember seeing a cutaway illustration of the Hess design 29 footer on the kitchen wall with a windvane…I asked Larry about it and he described how it worked (which at that time went right over my head)… until the day we went out sailing with the wooden prototype, shown in my YouTube movie “Origins of the Freehand”. It worked real cool and made perfect sense.

We can all thank the Pardeys for putting their experience gained from milage into the vertical axis design starting with Seraffyn’s and resulting with an efficient, eye pleasing vane for Taleisin.

As the movie shows the evolution over the years, it continues to this day. On the underside shown in first attachment photo you will see four Delrin washers. These keep the large wheel located to the bottom plate, where the bearing balls are nestled in a race top and bottom - this creates the "lazy susan " movement.

One day while discussing various things on one of their stop overs here in Newport Beach, Larry had mentioned that he once “lost his balls” …I belly laughed with him and said I did too… meaning the “bearing balls” had escaped once on me as well. I checked with some other long range sailors and they had the same problem. Turns out that the delrin washers after five years or so wear down and by doing so creates a little slop in the set up, resulting in the balls escaping. Mike Mallory (who is finishing up a solo circumnavigation) simply turn the washers upside down and continued with no problems.

As the evolution continues Larry came up with the fix for the problem. He installed two flat metal bars to the bolts that held the delrin washers. Metal to metal, so they could not wear out, see attachments. After viewing this, and having access to a watercut machine I had Aquatek cut a ring that would connect all four bolt locations and eliminate the problem… see attachment.

Attached photos show the bearing keeper from various angles. Very simple. Works perfectly. Metal to metal but it doesn’t actually touch except occasionally when there might be some upward pressure on the top part of the vane - i.e. when someone grabs hold of the backstay of the boat. Just keeps the two parts of the bearing races from lifting apart.

Hobart was very special as I’ll describe in our next newsletter.

So, there you have it, evolutionized again. If anyone with a Freehand wants to make the change to the new bearing retainer plate, e-mail me at Mav5252@aol.com…or simply turn the delrin washers upside down when they wear down as Mike Mallory has done. 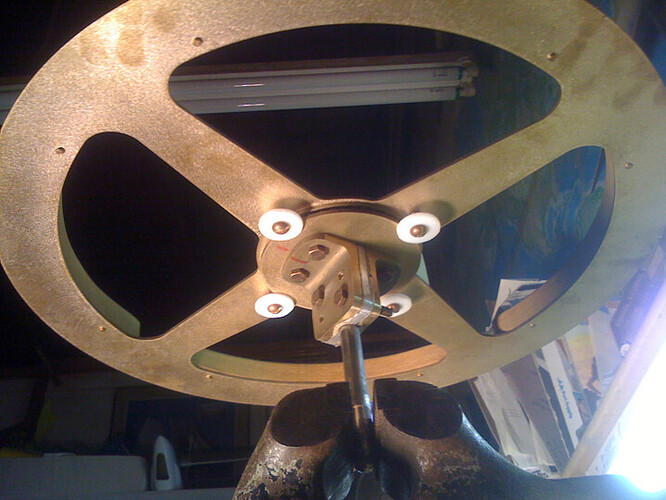 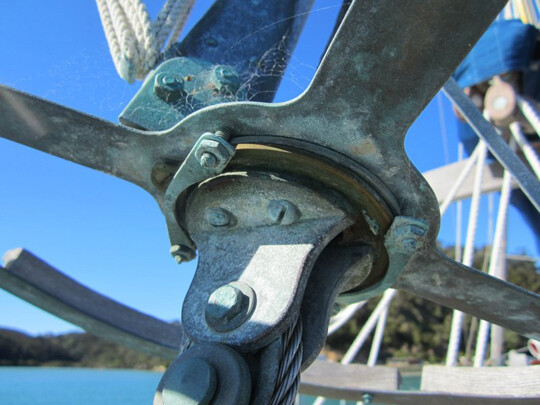 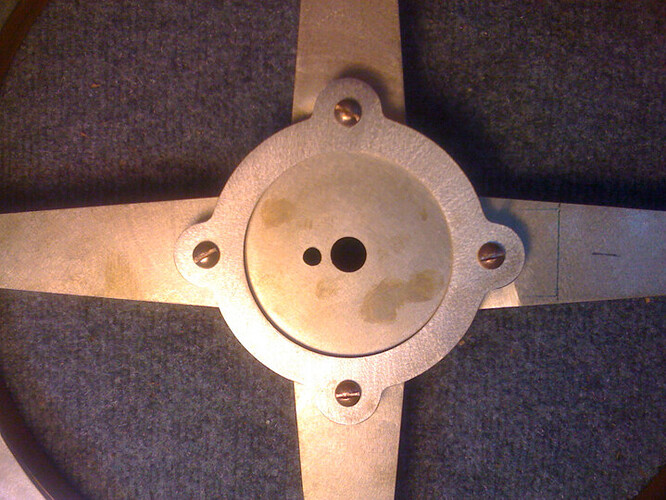 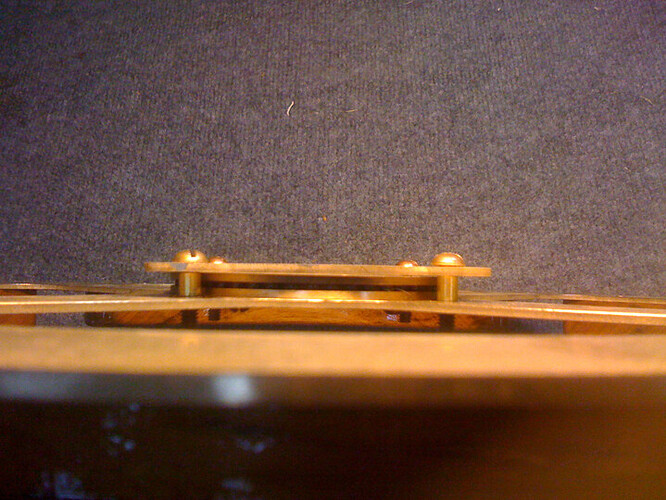 The delrin washers on Zygote are quite worn and so I’ve a lot of slop in the wheel. But still have all (or most!) of my balls. In the style of Captain Queeg.

When last I tried to remove the ss bolts (so I could flip the washers), I found them electrolytically joined firmly to the aluminum (ouch! I clearly have not been spinning out the ss fixings and coating them with a insulating gunk every two years).

Any ideas as to how to break that electrolytic corrosion bond?

I’ve thought of high heat, but have not yet worked out what temperature to aim for, what that would do for the anodizing on the aluminum, etc?

I was aiming to do the job next haul out (so the balls don’t go swimming).

Grateful for any and all suggestions.

Bill,
If you apply heat to the piece, remember, aluminum melts at just over 900degrees F.
Careful there…
rowboy

Bil, I have a wheel here that someone had left and upgraded to all bronze. You know I don’t make them in aluminum anymore for various reasons. I’ll try a few ideas as to unlocking them…I’ll have to get back to you on that. Leave me your e-mail address so I can reach you.