Another day on the bay, video recorded and edited by Karen using the i-pad 2. Great video and love your boat.

I think the dink is the SLM dink - the Cherub.

Nice video! You keep Odyssey in such beautiful condition.

Two questions: Did you build the dorade boxes on the lazarette? It is a nice support for the self-steering arm. And do you have close-up photos of the mainsheet blocks that have the cam cleat? I’m contemplating this and have noted what some others on this site have posted – I’d be interested in what you did.

Ellen,
I did make the dorade box next to the lazarette, in fact several times to accommodate different tiller pilots. It works well. The main sheet blocks are a combination of the standard teak block put together with pieces from West Marine. They work well. 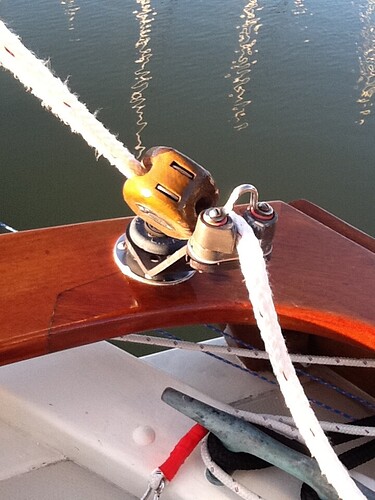 Ellen,
Well, I managed to post the picture… so here is the rest of the info.
The blocks are great and as I remember, I combined the simple teak block with the raised jam cleat I got at West marine. I wanted to use the original base, so secured them together with nuts and bolts. I remember it was a close fit, but workable. In another year or so, I’ll take them off to varnish the taffrail and could take more detailed pictures if your are still interested.
The dorade box does work great as a base for the tiller pilot. It has been made at least twice to accommodate different pilots.

Wayne, does the Harken part rotate?

Thanks, Wayne. The pic plus details of how you put it together are very useful.

We loved your video. We too have the 2nd iPad. Is there an app you used or is it youtube that you used to create your video?
Thanks

We used imovie app to create the video. Lots of fun, but a bit of a worry that the new pad might to dropped overboard. Looking forward to seeing other iPad videos.
Wayne
BCC Odyssey