I bought a Tohatsu 5hp outboard recently and have been looking at storage alternatives aboard Voyager. Interestingly, there are almost no outboards visible in the pictures in Ben’s collection or in my own. I’ve seen an L-bracket mount on a boomkin and a mount on stern rails (no rails on Voyager, unfortunately), but that’s about it. Any ideas for good and secure storage points would be appreciated. For sure, I won’t store it in the lazarette for safety and ease-of-access reasons.

I bought a Tohatsu 5hp outboard recently and have
been looking at storage alternatives aboard
Voyager. Interestingly, there are almost no
outboards visible in the pictures in Ben’s
collection or in my own. I’ve seen an L-bracket
mount on a boomkin and a mount on stern rails (no
rails on Voyager, unfortunately), but that’s about
it. Any ideas for good and secure storage points
would be appreciated. For sure, I won’t store it
in the lazarette for safety and ease-of-access
reasons.

I’ve attached a photo of Itchen’s mount. Works fine for us and a handy location for easy lifting in and out of the dinghy. The cross piece also serves to hold the stern light and gives another place to brace a foot when working aft of the boom. 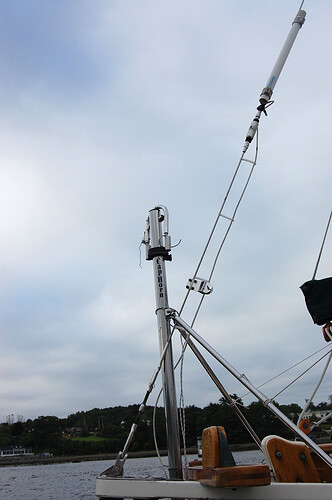 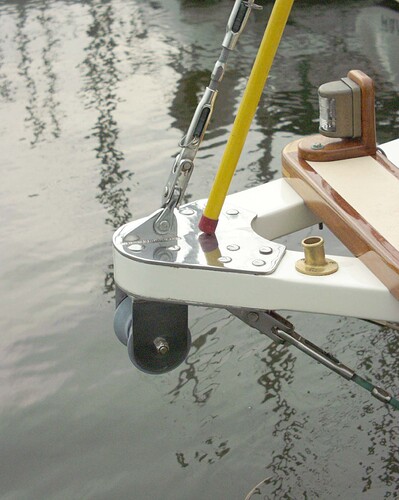 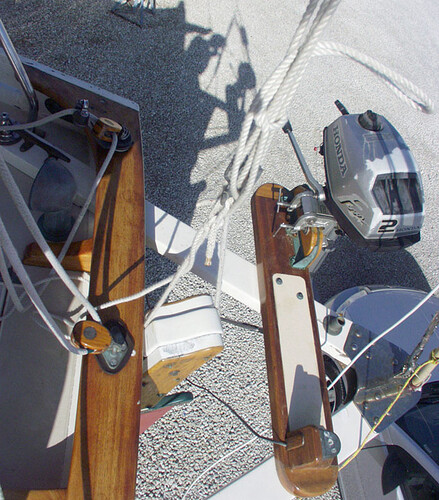 Here is a link to a photo from the Gallery:

I have my outboard bracket mounted to the gallows frame. The bracket shown is 2 layers of 3/4" ply bonded and skinned in epoxy, painted, and skinned with copper to take the bite of the outboard. I use this bracket with a 15 HP Mariner (84 lbs) - prop facing outboard. I’ve cruised this arrangement in blue water - it’s solid and practical. My boat has no railings or lifelines. This same arrangement would not work with railings/lifelines.

When I bought Dawn B, ( at the time Shawn Star) Frank, the former owner, had a bracket mounted to the top of the gallows stantion, I took it off because I have no outboard, I will try to find it and take a pic, it looked like a good arrangement, I was thinking about putting it back on this year in case I get an outboard for my dingy.
Jonathan

Interesting. Are guys using the outboard to power the BCC or a dingy?

I took my Yanmar 3GM out of my boat for a while and traveled under sail and oar alone. I was testing the Pardey mode of transportation. The stern lifted up a couple inches and it felt like I was riding on air. If I could rationalize it, I’d get rid of the 300-pound Yanmar completely and opt for an outboard. Sure would save weight and free up a lot of interior space, not to mention all that smell.

Thanks for the input, guys.

I saw another option this weekend. Has anyone tried storing their outboard in the rigging, around hip height in amongst the shrouds? I saw a cruising boat do it that way and it seems a good place to get it out of the way and keep the weight out of the ends,

Yes, we stored our 15hp Yamaha on a 2x6 on the shrouds on Waxwing for many years of offshore sailing. The weight of about 87 pounds tended to twist the wire slightly but this was compensated for in the lashing up process to keep it straight.

We found it an ideal place because it allowed the use of a halyard to lift it on and off the dinghy. I’d send a photo but we no longer have the engine.

Huh, always a trade off I suppose, an engine in the rigging would seem to put the weight very high and far outboard (no pun intended) to one side.

We went the opposite way and started out with just a sculling oar and sails. But by the time we got to the Gulf coast from San Francisco (borrowed an outboard to get through the canal) we were convinced an engine would be a great convenience.

I hate to recall the number of beach parties we missed because we were becalmed a few miles offshore. ;>)

The image below from the Gallery section shows Waxwing with the outboard on its bracket in the rigging. Looks like the 2X6 is simply seized to the shrouds at the four corners. Is this right? 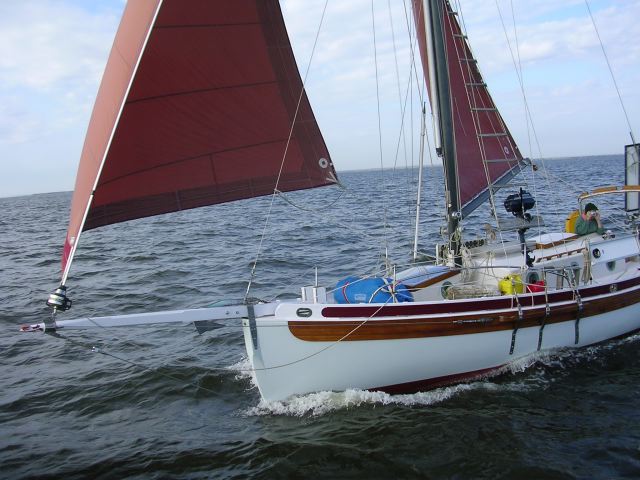 Warren, Yes, the board was grooved on the ends to accept the shrouds and then lashed through holes drilled in the board. We used bronze wire clamps below the board(all all the ratlines) to keep it in place.

The pic you posted I had forgotten about. The engine was a small 3hp? borrowed for a short vacation sail down the coast two years ago. But we carried the 15 hp yamaha in the same position for years from Washington DC to Trinidad.

As for it being weight high up and effecting the COG, I think if would have about the same effect as a ten-year-old boy standing on the side deck.