Would anyone happen to know whether the Canadian BCC builder used polyester or epoxy resin on the plywood deck surfaces? I ask because the paint covering my deck, cabin top and sides is cracked in many places and can be peeled off the deck surface like badly-glued linoleum.

Responses to a question about the peeling paint I posted on Wooden Boat Forum have,uh, painted a pretty dire picture, with one response optimistically asking about the resin used by the builder. He sited the possibility of poor adhesion of the paint, the cause of which could be a surface contamination such as amine blush (if it’s epoxy) that wasn’t properly removed before painting.

Any one know which resin was used, or know how I can find out?

Warren,
You said the paint is peeling and not the gelcoat. I’m sure you can find someone who knows the chemistry of what was used. If the gelcoat is peeling then that is a whole different story. I do know that the two smell different when you sand or grind them.

If the paint is peeling, the surface was not properly prepared prior to painting - i.e. surface contamination.

Can you supply a few photos??

Our boat is Canadian built and the decks are constructed similar to a SLM boat. The main difference is the coring. Channel Cutter Yachts used balsa core and SLM used plywood. Both coring materials have their pros and cons. As an example, rot will infiltrate plywood coring significantly faster than balsa coring.

A few photo’s would help.

Thanks for your replies.

My Canadian BCC was built in 1981 and has a plywood deck and no gel coat (that I have seen) under the two layers of pliable paint- the paint that I’ve peeled comes up revealing plywood and resin. The last coat of paint was applied less than seven years ago-- that much I know.

The paint cracks resemble spiderwebs and are confined to small areas–no cracks are larger than, say, my palm, and are scattered over the side decks and cabin top and sides.

I’ll be at the boat tomorrow and will take pictures and post them.

Warren,
Sounds like you could have some type of surface contamination under the first layer of paint. Do you know if the problem was present before the second coat of paint was applied ? If not, I would suspect that there is some incompatibility of paint between the first and second coats or between the first coat of paint and the surface under it.Do you know what type paint was used on the first coat and second coat ? I do know that different finishes expand and contract at different rates causing failure and lifting. Could be the chemistry between the two paints. When the paint lifts off does it come off easy. Have you done a moisture test on your decks, house sides and top ? Test the areas where your cracks are as they may be " hot spots " for moisture. Is the underside of your deck sealed with resin ? I’d be interested to see some pictures as well.

Here are a set of photos.

The question I asked on Wooden Boat was about where to find information on how to proceed with a deck paint job, materials, and things to look out for. The responses addressed the potential causes of the paint lifting and freaked me out a bit, but I now think I have nothing more than paint lifting off paint and the adhesive layer lifting off the deck in high traffic areas.

The picture with the large bald spot shows some of the first adhesive layer still solidly on the deck. This location is at the port-side boarding gate. The resin looks to be in fine shape.

Also it appears most of the deck paint cracking is occurring on areas covered with non-skid. The newer paint is lifting off the original paint which is also a non-skid surface, so the problem may simply be the painter failed to prep the previous non-skid sufficiently. 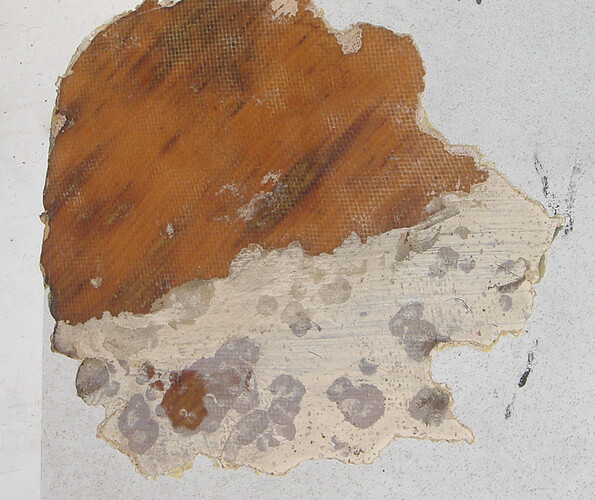 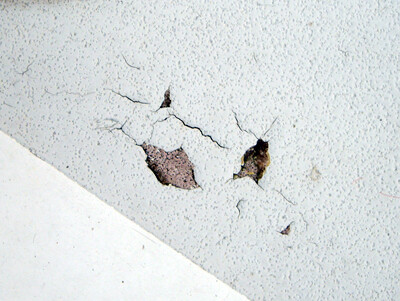 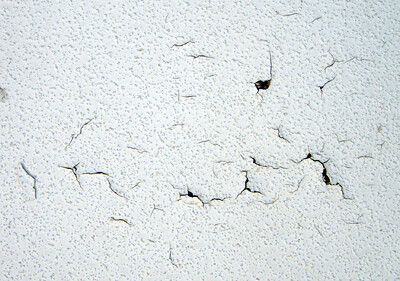 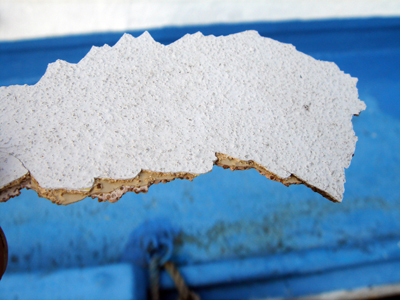 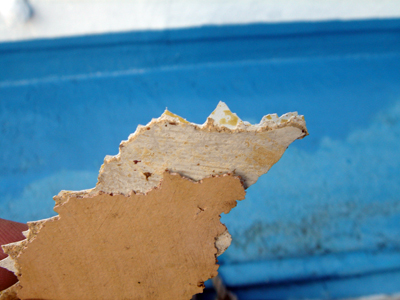 Warren,
I think you are right about the prep of the previous non-skid. Since that surface isn’t totally flat, because of what makes it non-skid, it becomes difficult to clean and make ready for a re-coat. Some areas of the top coat may have lifted and cracked allowing water to migrate between the layers and aid in the seperation. I’d be interested to know what your plan is for the fix.

Based on image 008, the “resin” layer appears to be fiberglass/resin composite or more commonly referred to as "fiberglass. The black streaks in the wood under the fiberglass may be where water has permeated thought the fiberglass layer or it was there when the decks were fiberglassed. I suspect there are several layer of glass/resin covering the wood or the deck would be rotted through.

I do not see any easy way, always the case, to completely remove the paint on the deck. John’s suggestion to soda blast it off is probably the fastest means to remove the paint, although it can be expensive. A heat gun and scraper is faster than sand papper to remove paint or varnish but one has to be careful not to soften the fiberglass underneath the paint. Also, if the wood becomes hot, it may degass and lift the fiberglass. I had this happen to me on another boat.

I am sorry I am unable to offer better solutions. You may want to obtain an estimate to have the paint removed by soda blasting. You do not have to follow through with the work. I imagine you know the polite way to do this in Japan.

Thanks everyone for their comments.

I’ll check the web for an explanation. Rod mentions it’s costly. Is this a fully- tented, high-pressure compressor-like operation cuz I know if that’s the case, the cost of doing it here will be astronomical.

In the mean time, I’ll need to paint over the exposed bits of the deck to reduce UV degradation. Can anyone recommend a paint type that will come up easily when the time comes for the big job?

Soda blasting is generally cheaper and more environmentally friendly than sand blasting as the bicarbonate of soda will disolve in water. It is a much gentler system, and you probably don’t need too much pressure to achieve the task, perhaps 30 psi, but it does need specialist equipment.

“Soda” is in fact a formulated bicarbonate of soda (baking powder) and it is effective because the soda particles explode on impact, blasting away the surface material, but leaving the substrata intact.

Blasting the deck would not take much more than 1/2 hour, but the hourly rate will be quite high because you are helping the operator to pay for his equipment.

In the USA some states do not require tenting and extraction systems when soda blasting, but the rules vary so much globally that you need to check with your local blasting contractor.

The use of an infrared paint removing tool could be used for this type of paint removal. The infrared system only heats the material being removed and not the underlying surfaces. You still must follow with a putty knife to remove the softened paint. Since this is a flat surface removal the tool should work well here. The site for this is http://www.silentpaintremover.com . I have seen them at trade shows and they seem to work in removing many different types of paint. Soda blasting is the way to go if you want to avoid the mess and goo of stripping paint by hand. Don’t use a sandblaster as it is can be distructive if the operator is not careful.

Having worked previously with a heat gun, the Silent Paint Remover looks interesting. Have you heard of anyone using it successfully to remove deck paint? All the literature on the site refers to removing paint and varnish, etc. from wood surfaces. I wonder how it would perform on fiberglass.

Warren,
I don’t know about the use on fiberglass. My best guess is that it would work but to be safe I would ask about it on the product site. I did see at one point you could rent one of the units from them to try it out. Best of luck.