I’m in the process of clearing the decks for a repaint and have come to removing the combings and winch bases. The problem I’m having is understanding how the combings are attached. I’ve looked below decks for thru-deck bolts and have found none. This leaves, then, the possibility that they are held to the deck with some kind of adhesive, but this seems unrealistic given the loads they take.

I’ve attached some photos to illustrate.

The combings are attached to a forward piece on the cabin side and to the winch bases. These two attachment points may be robust enough to strengthen the combing and an adhesive would then provide sufficient bonding to the deck.

I believe the combings and winch bases are in need of some serious maintenance and should come off, but if the work is destructive to the parts or deck, I may reconsider removing them.

Any thoughts on this would be greatly appreciated, as would any thoughts on how to remove these parts if in fact epoxy was used for the bonding. 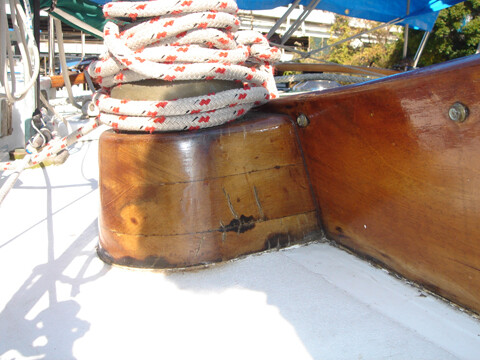 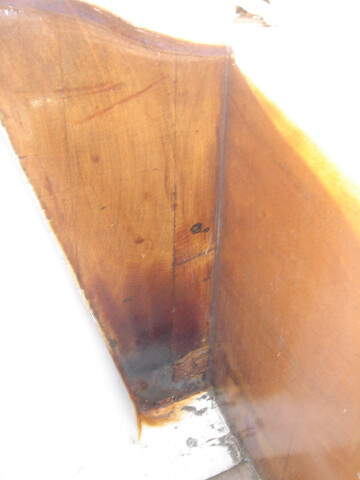 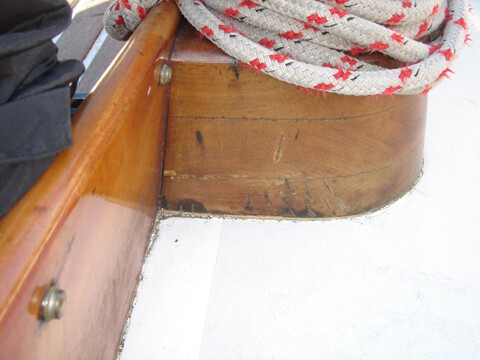 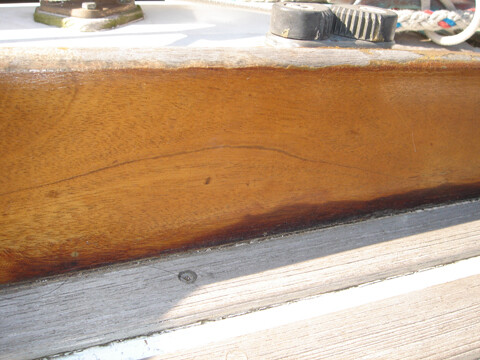 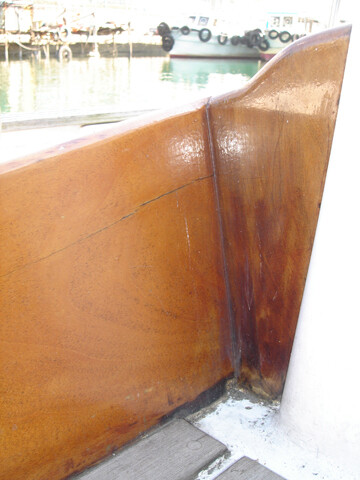 Warren,
They have to be fastened from the underside or they would be flapping around like a fish on deck. If they aren’t screwed down or up somehow I would love to get my hands on some of the adhesive that holds em on. Do the combings extend aft of the winch bases? If they terminate at the winch bases they may be just bedded with 5200 and get their anchor from the winch base and the block forward attachment to the cabin.If they are bedded with sealant the best way to get the combings off is to work a fine steel wire two feet long between the deck and combing. Tie each end of the wire to short wooden half inch diameter dowells and see-saw the wire while pulling it through the seam. This should cut the sealant and do little damage to the deck or combing.

Here’s an old pic showing the length and angle of the combings. This angle and the narrowness of the combings may indicate a lack of mechanical fastenings. 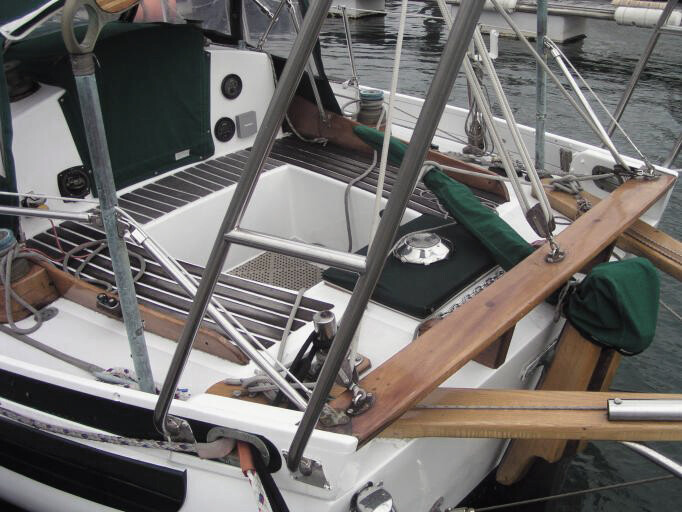 I am unable to help you with this matter, as I do not know the answer. However, if you find out, please add a post to this forum, as I too am interested in removing the coamings in order to re-finish them properly.

I think you will find that the combings are screwed up from under the deck. The screwheads were probably covered over with a filler and paint and you’ll have to do some scraping to expose them.

Also at the forward end where they meet the cabin, look inside for the heads. And of course horizontal screws into the winch base.

I think removing the entire combings is a bit radical in order to re-paint the decks but I admit you have some problems going on with some of those blackened areas, particularly with the corners where the combings meet the connecting piece to the cabin side.

You may be able to remove and replace the short connecting pieces by carefully removing the screws where the combing sides are attached to the short joined pieces. Of course you’ll still have to find the screwheads on the inside of the cabin…hopefully they were not covered over with wood trim on the inside. But before going that far I’d try prodding them for soft spots.

As for the other blackened areas shown in the pics, it looks like water has gotten under the varnish. The color does not necessarily mean the wood is already rotting. Teak is pretty tough. You may get away with stripping off the varnish and letting those areas dry out for a few weeks, then come back with a some rigorous sanding or at worst putting in a Dutchman.

I hope this helps.

Warren,
I agree with Stan that they are most likely fastened from under. Your combings look to be made of mahogany. If this is the case the black areas could be pretty soft and you may need to repair them. Once you get them off and if the wood is soft along the length you could cut away the bottom and epoxy new wood on in its place.Mahogany unlike teak does not fair well especially where water can collect and remain damp.

Thanks to everyone who commented!

Youse guys were right. The combing bolts were flush up against a deck beam out of sight above the quarter berth and in the lazarette.

I inspected the deck paint and found ten layers. The paint has curled up like surf where it meets wood. The previous painter did a mediocre job of taping, so it’s off with everything-- down to the fiberglass! The financial debate is whether to go with Awlgrip. One quote had the price at $12000.

The combings certainly have to come off. Besides my desire to do this paint job right, the cabin/combing pieces are soft. I shoved an ice pick almost clear through one of them. In trying to remove them, I discovered that the PO had not used a backing plate on the port primary winch and three of the six nuts have corroded to nubs I cannot remove or break off, except perhaps by acetylene torch.

As for removing these pieces from the deck and cabin, I’m hoping wire and wire saw will cut through the 5200 the PO used. God, that stuff is steadfast, relentless, stubborn, tenacious… like a bad penny.

Alice’s Rabbit Hole is such an apt analogy to this whole business of refitting. I find myself asking just how deep ‘this one’ will go.

Thanks again for the responses.

You would find that the 5200 is much easier to deal with if you heat it with
a heat gun. It softens it considerably.

As for removing these pieces from the deck and
cabin, I’m hoping wire and wire saw will cut
through the 5200 the PO used. God, that stuff is
steadfast, relentless, stubborn, tenacious… like
a bad penny.