Looking for a source to replace the black rubber donuts on my blocks?

If I remember correctly the deal is:

My memory is that either Sumio or Roger found that MB was the perfect source. But I don’t know what MB thinks of them (ie what the part is called in MB speak - mounting rings for something or other).

Don’t rule out other sources (eg McMaster-Carr, rubber specialists etc). I’ll have a look at the McM-C catalog and see if I can find a reasonable facsimile.

Don’t rule out other sources (eg McMaster-Carr,
rubber specialists etc). I’ll have a look at the
McM-C catalog and see if I can find a reasonable
facsimile.

McMaster-Carr catalog doesn’t show a rubber grommet or O-ring that would be suitable.

However McM-C catalog does list what they call ‘cord stock’ in round or square cross section that can be used to make a rubber grommet or O-ring. Deal would be to buy a length of cord stock of about the right cross-sectional diameter, cut to size, and then to glue into a ring using superglue. Neoprene of 0.5" dia would be close. See the pdf I made from page 3495 of the McM-C catalog.

A visit to your local MB dealership might be fun too!

You were right Bil, a visit to the parts department at the MB dealership worked! 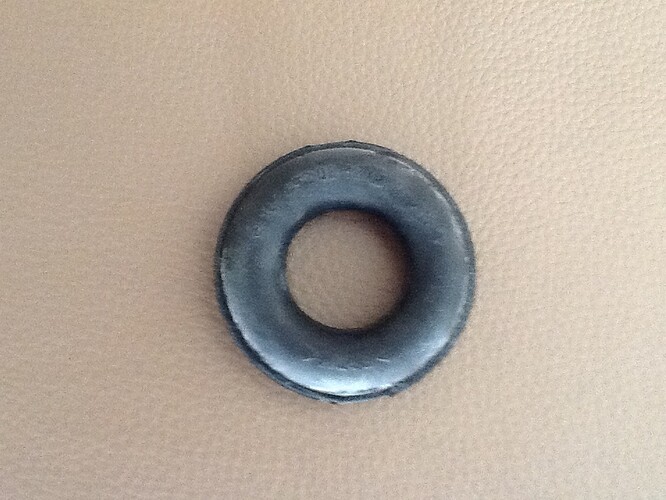 Well done! Thank you very much for the part number, traveler.

Having the part number gives access to even less expensive suppliers, such as:

I think Sumio discovered these ‘muffler hanger’ mounting rings from Mercedes Benz and realised they’d serve perfectly as stand up supports for the staysail sheet turning blocks and the mid-taffrail mainsheet block.

Does anyone know of a specialized tool or a trick for taking the blocks apart? It’s not a complicated process, but I’m thinking there has to be a better way than using pliers to turn the cover plate off. Also, does anyone know the standard size of the staysail blocks mounted on the cabintop (12mm or 14mm)?

You’re referring to the bronze end caps that screw onto the stainless steel axles? From memory the end caps have two dimples in them, similar to the dimples in a deck plate. Is that right?

I’ve done it years ago, but I didn’t take notes of the process.

I think I asked Roger Olson and he gave me the hint: 1. measure the distance between the dimples; 2. get a length of scrap lumber; 3. put two nails through the lumber at the right spacing; 4. grind the points of the nails down a little; 4. use the lumber like a deck key to unscrew the end caps.

the standard size of the staysail blocks mounted on the cabintop (12mm or 14mm)?

Since ABI (A&B Industries aka ABI Marine) folded, the only source I know of for similar teak cheek blocks is Davey Limited in the UK. Davey (see www.davey.com.uk) sizes its blocks by length and line size - in other words, a block that is 4" (100 mm long) accepts line 12 - 14 mm, has a sheave diameter of 50 mm, and a Safe Working Load of 2000 kg. Zygote’s ABI blocks are about the same in dimension. I would guess that Z’s staysail sheet turning blocks and jib sheet turning blocks are 105 mm long and have a sheave about 50 mm in diameter.

The work around for the end caps is acceptable, especially given the time and energy required to chase down the proper tool. I think the only thing I’m going to do differently is use screws instead of nails.

As for the blocks - I plan to do a little more research just to be sure I’m buying the proper size. I just replaced all my running rigging, and if my memory serves me, the sheets for the staysail are 1/2"? I’ll keep you posted…

I suspect that Tommie or Dick had made a tool, on the lines of what Roger had outlined to me (two pins through timber at the right spacing).

I’ve not heard what happened to Andy & Becky of A & B Industries. I don’t know whether they manufactured the blocks or imported them.

Here (with the usual condition of the cosmic flow being favourable) is a clip from the ABI catalog on their double teak blocks. What they had on their single teak blocks seems no longer recoverable. 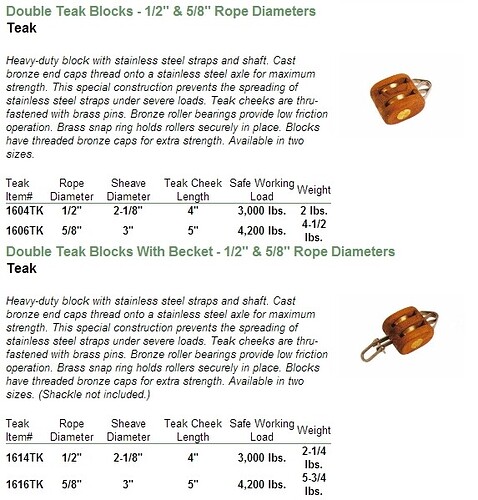 According to a post on the Westsail Owners’ Forum (http://westsail.info/index.php?action=posts&thread_id=2598) guidelines on how to build similar blocks are included in The Sailor’s Sketch Book by Bruce Bingham (1983, McGraw-Hill).

But that post, written by a person who had made some of the blocks, suggests that tooling up for the task is not trivial.

Making a tool with two pins (screws with tips ground off) through a piece of wood is the way to unscrew the metal covers after removing the set screws.

I didn’t see any set screws on my blocks. Are your blocks ABI?

Never mind Wayne - you must be referring to the wood screws as the set screws. Got it!

FWIW , South Coast did supply a hand tool to use for disassembly of their blocks , one came with my boat . It took a v long time to figure out what it was for .

Will try to attach a pic . 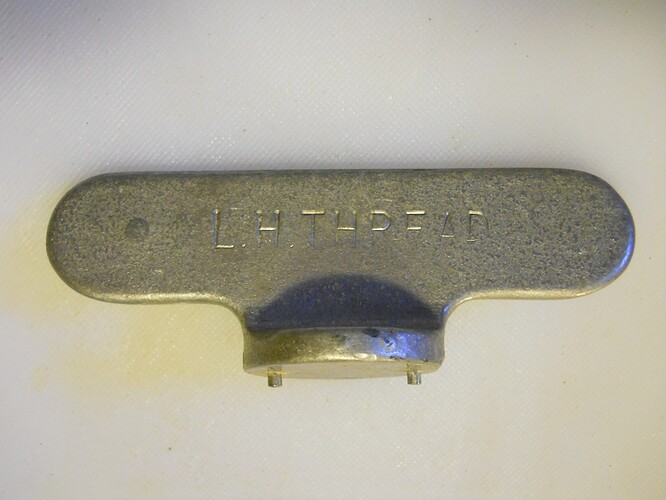 I love the key, but a quick search on the internet to locate a source proved negative. Any ideas Bil?

I attached a picture of a teak block from Davey & Company to my last post. I’m assuming the 12mm size will work with our staysail sheets (recommended sheet size is 1/2")…any thoughts?

I reckon the work around of nails or screws through scrap lumber is the easy way to go. It works and is not expensive.

I’ve seen deck plate keys (for fuel, water, and waste deck plates) similar to the one Douglas photographed. In (I guess) the 1970s they were the standard deck plate key. They used to bundled with deck plates and sold loose because they were small and easy to mislay. I saw some only a decade back, made in a hard plastic and with a hole in one end for a lanyard.

The common deck plate key for the past three decades has been the modified rectangle of pressed ss made by Davis, with a shackle key slot, two different pin spacings, screwdriver slot head, hex wrench heads, and bottle opener.

With the perfect pin spacing and pin length to suit the ABI block end caps, a deck plate key would be wonderful. When ABI supplied Sam L Morse Co. with cowl vents for the dorade vents, ABI used to supply a wire plate key for the plates that could be screwed into the deck plates to seal the dorade vents in nasty weather.

If you had some stiff wire (e.g. fencing wire, galvanized iron rod) of the right diameter and were keen to make just the right bends, that’s an alternative work-around. I’ve attached a clip from the ABI cataloge to show the idea.

*** Late addition: search for “deck plate key” in Google Images! Amazing diversity! I counted 11 different styles of deck plate key (just counting the two pin type) and images that do a better job of explaining the wire key than my clip from the ABI catalog.

Yes, I think the Davey 12 mm blocks (4" or 100 mm long - Davey uses the length of the block, in mm, in its product number and two letters to code for the timber ) would be a good replacement for the ABI blocks we use for turning blocks on the sheets. I don’t know how Davey constructs its blocks.

Rubber donut rings around the base of the mid-taffrail mainsheet block work well, because the mainsheet is always under minimal tension.

I reckon the rubber donuts around the base of the staysail sheet turning blocks don’t work very well. On a beam reach or broader in a seaway, the staysail sheets are prone to hammering on the coachroof handrail.

That’s where a stand-up, such as a spring stand-up, works well.

I’ve tried a thump mat (my favorite was 15 ft of 12 mm rope done in a flat knot such as Ashley Book of Knots 2360 - if you want to be fancy, instead of using one run of 15 ft rope, use three 6 ft lengths of different color rope, such as green and cream or whatever color scheme your boat is). Not too fiddly to make in situ, around the block. And I’ve also contemplated replacing the rubber donuts with a custom-made rope grommet.

Shane of White Wings 3 has the idea of installing a modern stand-up block for functional sailing and dress WW3 in her ABI teak blocks only for show.

Generally speaking, I’m happy with the positioning of the staysail sheet turning block for a close reach. But I question the position on broader points of sail.

I tried using a twing line - sort of thing you might call a Barber hauler - using a spare vang tackle snapped around the staysail sheet forward of the turning block to haul the sheet outboard. Gave an interesting result, but I haven’t pursued the idea further to work out (1) whether a twing line really does give better staysail trim on a beam to broad reach; (2) whether a twing stops block hammering; and (3) what is the perfect set-up (length, attached to which stanchion or stay etc).

My plan was to play the vang tackle to find the perfect set-up and then make up a dedicated twing line, perhaps with two karabiner clips, of about the right length. My crew has taken shore leave and I’ve had other tasks on the job list.

As it turns out, bar the comments on the keys, much of what I just wrote is in Zygote’s BCC Information Book!

While the cosmic flow is running in my favour, here are two clips of what I mean by thump mats using the ABOK 2360 flat knot.

These clips are taken from Lindsey Philpott’s The Ultimate Book of Decorative Knots. Mine are usually lumpy, but that likely gives better cushioning. Or so I say!

I reckon ABOK 2360 is an easier flat knot to work than a flat Turk’s Head. Easy enough to make in place over the staysail sheet turning block (in contrast, the only way I can make a flat Turk’s Head is to set up a base board and use dressmaker’s pins to hold the rope in place temporarily. I’m a tad dyslexic and otherwise mentally challenged, so your mileage on a Turk’s Head might vary). 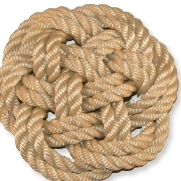 In lieu of having a key that fits the ABI blocks like Douglas has, both the stick & screws or stiff wire appear to be a workable alternative. I used a pair of needle nose pliers cradled between my thumb and index finger, somewhat similar to how one holds chop sticks, to remove the end caps. I don’t recommend this method be used on a repetitive bases, but it certainly works in a pinch.

I’m leaning more towards the practicality of Shane’s idea, using modern stand up blocks with a spring makes sense; however, I will probably stick with the rubber donuts since I already have them in hand. Another shortcoming of the rubber donuts is they eventually degrade from UV, and in my case, causing black streaks on my taffrail and cabin sides. This was the precipitous to replacing them in the first place.

I first saw the thump mats a couple of weeks ago when viewing photo-media of a time period Bristol Channel Cutter that had been restored. They are certainly an interesting alternative to the rubber donuts, and I would assume more authentic to the time period. That’s a guess mind you, as I haven’t conducted any research as to the actual origin of the mats.