More things to worry about, I imagine the hatches being blown off at the wrong moment and seeing sky just when you least expect it. Then of course a deluge of water would be the really rude awakening.

So I am looking at the best and most secure method to keep the scuttle and the skylight in place apart from the external hinges, any pics would be particularly appreciated. Thanks folks. Lots of stuff to sort out prior to launching.

It’s a good thing that you are thinking about additional securing for these hatches.

Another time while sailing in Newport Hbr, her scuttle hatch flipped completely open, when the staysail sheet hardened in a gust, and was caught under a hatch corner.

I installed 4 DIY fabricated ,screw down dogs, on the scuttle hatch, and will try to post a photo, here , soon .

Hi Stewart , I am going to try to attach a photo of the Scuttle Hatch Dogs that I fabricated out of spare parts.

If you can enlarge the photo you may see that I used the fork end of a 7/16" bronze turnbuckle , and other bronze bits that were in the junk box.

I mounted 4 Dogs , one in each corner of the hatch . 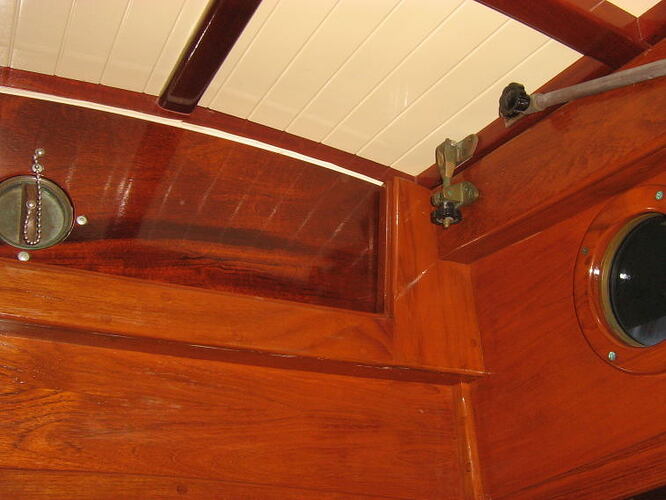 Stewart,
I have always used the Bronze ABI hinge with removable pin. I put 2 sets on, one on the forward end and one on the aft end. This way I can hinge my hatch either way. Then when I go to sea I just put the removable pin in each end. I also through bolt them when installing, instead of just attaching with wood screws. Never had a problem with this in 30 years and some nasty weather. See attached photo. 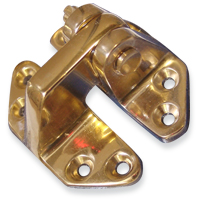 I also did consider that availability of securing the scuttle hatch, by inserting pins in both forward and aft hinge pivot holes, thus securing that hatch from the outside , and can still use that feature if desired.

BTW , I agree that one bolt is worth the equivalent of at least 5 screws, or 20 nails !

Gosh , I don’t know just who pointed out to me, ( It may have been Roger) that if I placed a 1" diameter hole in the engine compartment set-in fire wall removable panel, behind the companion way ladder, that I could use that hole to spray into the engine compartment, a fire extinglisher, if a fire started in there. A Great Idea I thought !

While thinking of engine room fires, I also considered the “What If” senerio, If there was an out of control fire in that engine room and the heat and flames blocked my exit up through the companion way.

It was then , that I thought of the forward scuttle hatch as an emergency escape hatch, too, and then decided to make the hatch secure from the inside, instead of just the outside .

None of us find it easy to think of worst case senerios, on our boats, even me .

I can most heartedly Thank Bil of BCC Zygote, to open my eyes, to the possibility of down flooding stability on a BCC , and mark that “Point of No Return” , on the mast, inside the cabin, in plane view, for me and my crew to decide when to exit , if the water gets that high , and then climb into the life boat.

I would suspect that all your years as a advanced diver and photographer , has given you a heap of knowledge , and we are especially greatful that you share what works for you, on this forum .

Good point Douglas!
Most of my years were spent on Angelsea without an engine…so that was not a concern. but now I have an engine and keep finding ways to hate it!