Greetings all. First let me say. Awesome boats! I’m just an admirer so far. In time hopefully I’ll be an owner. I don’t want to intrude so if this forum is for owners only please forgive me and I will vanish. I’m not sure I’m even posting in the right area.

It’s in Port Townsend WA. It’s name is Terrier. I’d love to know the model, etc. Getting to communicate with the owner would be awesome. Thanks for any leads. 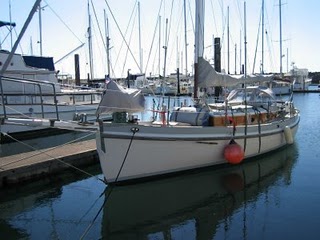 I found this info in the Database:

Is this likely to be the one? Thanks.

Hello Jfelkins,
As the owner of Terrier I can give you a few details on her. She was built from a Sam Morse BCC bare hull, #31, beginning in 1977 and launched in 1987. Her builder-owner, Mike Logg, had lived on her and sailed her for the next 17 years. Eventually, the cold-wet winters of the NW lead to him passing her to me. She was built with local Doug fir (clear) for the interior and spars. A load of logs was bought directly off a truck and air dried for two years before milling locally. Her teak decks, (traditionally laid) and cabin trunk also used teak air dried after being kiln dried. All the bronze was locally cast (Port Townsend), much from one-off patterns. Although Mike used Lyle’s plans he also made some changes that make Terrier more unique. Her upkeep is greatly assisted by the marines trades of Port Townsend. Like all the BCC’s she is grand to view and a greater pleasure to sail! I thank you for posting her picture. Cheers,

Thanks Tom! If you’d like I can send you that picture either digital or hard copy. I didn’t take it. the boat looks awesome. Maybe some day we get up your way.

Thanks Tom! If you’d like I can send you that picture either digital or hard copy. I didn’t take it. the boat looks awesome. Maybe some day we get up your way.