About a year ago in another thread Luis aboard Ahinga asked about how to unfreeze the clutch nut on the manual ABI windlass for servicing. I have a similar problem except that my clutch nut instead of loosening when turned counter clockwise turns the gears and pulls in chain.I’m new to the operation of this windlass, but shouldn’t the clutch nut only ease or firm up resistence? I’m looking to tear it down and service the thing and any info would be helpful.

I don?t know if this can be helpful in your case but at that time I could unfreeze the clutch with patience, applying repeatedly WD-40, tapping the thing with a nylon head mallet and using a gas torch to heat it up. After several days and almost give-up I could turn the clutch again.

Now I?m dealing with a similar problem: I?m trying to remove Anhinga thru-hulls from the original Spartan seacocks in order to maintain them.
As I don?t know other way I?m using again the same method.

Try using a penetrating catalyst such as Liquid Wrench or PB Blaster, instead of WD-40. I have had great success with PB on all sorts of stuff - just spray it on a couple times a day for a few days, and it’ll get anything loose that’ll come loose. The exception is galled stainless.Be careful though - it stings like crazy if you get it in your eyes, and will stain paint/fiberglass if left to sit.

As an aside, it will also kill pests. Works on spiders, roaches, even hornets!

There is also a product called “Kroil” that seems to work better for me than WD40. Same advice about staining and burning the eyes though.

Did your clutch nut turn when it was frozen or was it locked in one position? Mine turns counter clockwise and turns the wildcat and everything else. I don’t think this is supposed to happen.I’ve been blasting it for a few days now with an excellent Japanese penetrating liquid, but as the nut turns in the direction it’s supposed to loosen,it won’t break free.

As I remember, mine turned on either way some degrees.

After that penetrating oil treatement I will try heating the thing with a torch (I used a small portable kitchen type model).

With some patience you will do it.

I will second the use of PB Blaster as a penetrating “oil.” You might try “ringing” the nut with a hammer. The resultant vibration helps the oil penetrate into the rust.

Warren,
I am puzzled by your observation that the clutch nut revolves freely in both directions. Normally one has to first engage the gypsy pawl to stop the gypsy from rotating counter-clockwise, at which point the clutch nut should loosen. If even then it does not loosen, the next step is to try the PB Blaster, heat, etc. PB Blaster and repeated heat (not burning-hot)–and time and patience as it soaks in over a few days as others have suggested is a time-proven method.

But without stopping gypsy rotation with the pawl, even an unfrozen clutch nut will never loosen. The converse is also true, in that one has to use the pawl to stop rotation when tightening the clutch. My apologies if you have already used the pawl and the problem lies elsewhere.
Scott

About a year ago in another thread Luis aboard
Ahinga asked about how to unfreeze the clutch nut
on the manual ABI windlass for servicing. I have a
similar problem except that my clutch nut instead
of loosening when turned counter clockwise turns
the gears and pulls in chain.I’m new to the
operation of this windlass, but shouldn’t the
clutch nut only ease or firm up resistence? I’m
looking to tear it down and service the thing and
any info would be helpful.

hope you have solved your windlass freeze problem. As I told you I?m dealing now with a similar situation: unfreeze Anhinga thru-hulls.

I tried with great success a new product from Wurth, the Rost Off Ice. This spray as a double action: first cooling to -40? C, contracting the material and creating microscopic cracks in the layer of corrosion at the joints, then these cracks break up ensure better penetration of the active substance. It really works!

I attached some photos showing the tools I’ve used. 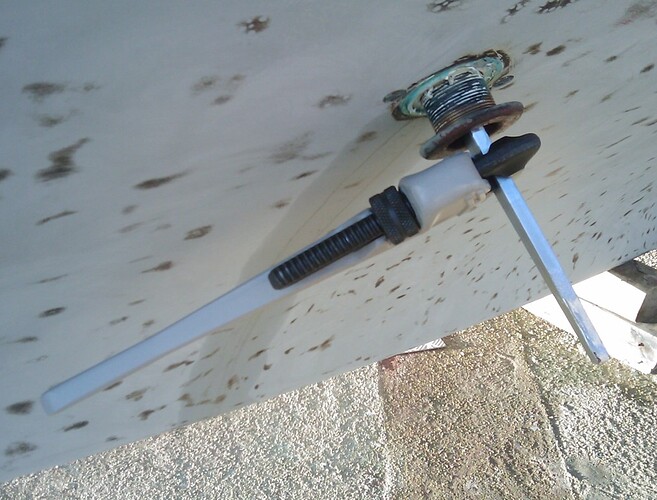 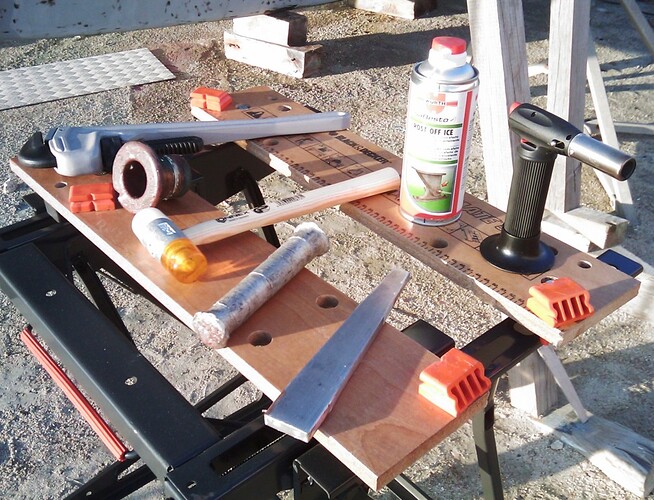 the only thing that worked was to lock the wildcat with the stopper and use a ‘real’ lever bar and a large hammer to knock the locking nut counterclockwise.

The wimpy hollow bar provided by the manufacturer just doesn’t get it with this windless.

The windlass itself is made of solid bronze and stainless(terrible idea) and WILL take abuse readily. (The only thing I ever found it wasn’t much good for was raising a stuck anchor) but the handle provided bends without much effort. Make yourself a real handle and make it long enough to work standing up.

No go get a big flat bar that will it the slot in the locking nut and a large hammer and free the bugger up.

On the resistant thru-hull problem, I’ve found that some heat from a small propane torch, applied on the outside of the thru-hull, helps. If something made of metal is bedded with 3M 5200, a bit of heat will help break its grip. I think heat helps due to metal expansion, as well as it weakens the sealant. Also, a piece of waterpipe stuck on the end of the wrench helps.

On the ABI windlass, it looks like a copy of the Simpson-Lawrence 555, which has it’s own issues with Al and ss. The S-L 555 does come with a solid steel flat bar handle, long enough to be used while standing. I wish the handle was ss, as the lower end soon becomes rusty.
Dan

If I have thru-hull that is difficult to remove, I grind off the head with a random orbital sander fitted with 60 or 80 grit paper. Once the mushroom head is removed, I pull the thru-hull’s threaded section out from the inside or drive it through to the outside. Sometimes, I will clamp a large pipe wrench to the thru-hull and twist it loose. I always ask myself is it more cost effective to take one or two days to remove the thru-hull intact or just replace it. If necessary, I will use a heat gun to soft the bedding compound after grinding off the mushroom head. I use whatever “technology” I have available to remove the stubborn “beast.”