For an amazing collection of BCC pics go to: 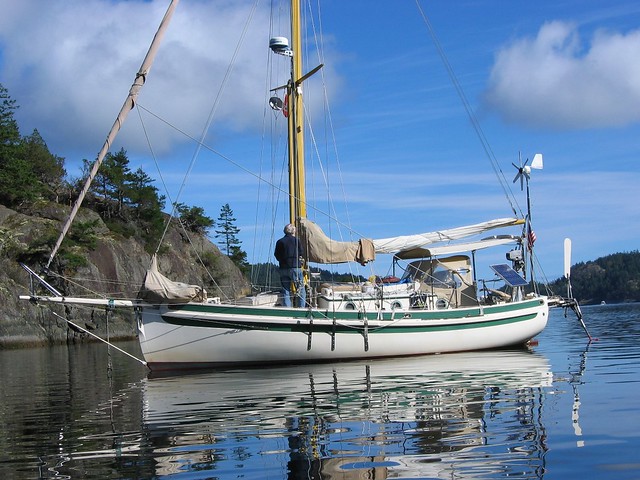 I am assuming it was put together by David Kent. It’s a great arm chair tour of the fleet!
Wayne BCC Odyssey

If anyone wants to add to OUR collection of BCC photos, please do so… let me know via email ben@bccelizabeth.com. I’ve got over 400 up now, looking to hit 1000+ pics – soo keep 'em comin!

I know we have a gallery here on the SLM site, but flickr is a bit more accessible to the world, so i’ve put everything I have up there now. (The old Picassa gallery I made is still live as well.)

I’m sad to say, I thought you could have multiple users on a flickr account – but I realize now, that would be impossible. So best thing I could do was to make a BCC group on flickr. So if anyone wants to add to that group, you can do so, however you will need your OWN flickr account, which is FREE and worthwhile anyways.

Also, I’m happy to upload pics if you want to email them to me, or I periodically troll the site here for new pics… so just upload them here on SLM, and I’ll find em.

Furthermore, for anyone on Facebook – there is a Group there called BCC Lovers which I started way back when… so if your on Facebook do a search for it and join up!

Here’s the BCC Flickr Group Link – right now it just mimics my main BCC photo album, but hopefully we’ll have some new uploads from other flickr users to the group soon?!

I finally submitted pictures of my boat to the gallery so you will find some new pictures there.

Ben,
Nice work! I recently uploaded 3 pics to the Gallery. The one of Shaula leaving Bora Bora has a story. I sent a 8X10 print of it to Sam in 1990. Some months later, I opened a new Ocean Navigator magazine, and there was the pic (in black & white) in a full-page ad for marine insurance! George, the new owner of SLM,told me that the insurance company called him up and asked for a good pic, so he took it off the wall and loaned it to them. The ad ran for several years.

For kicks, we called up the insurance company in 1993 before heading offshore, and inquired about insurance for Shaula. They weren’t interested–too small and too few crew (2)! We’ve never had offshore insurance and after over 55,000 miles, we’ve never had an expense that would come in over the deductable.

Unfortunately, it’s a Kodacolor picture and not super sharp. I’ve never had the original positive, so I had to scan my print.
Dan 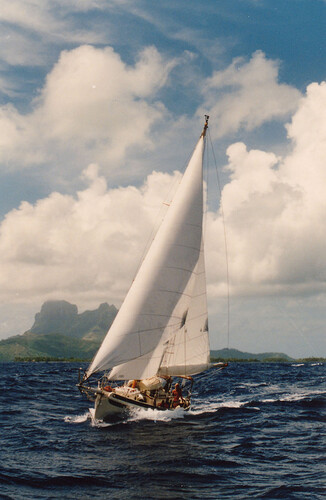 That is a great pic Dan! I snagged it, adjusted the colors a bit and sharpened as best I could – there’s not much difference, but I tried. I also love your bulwarks color scheme - I might do the same. What paint and colors are you using? And, any thoughts about that color scheme I should know before I go for it? 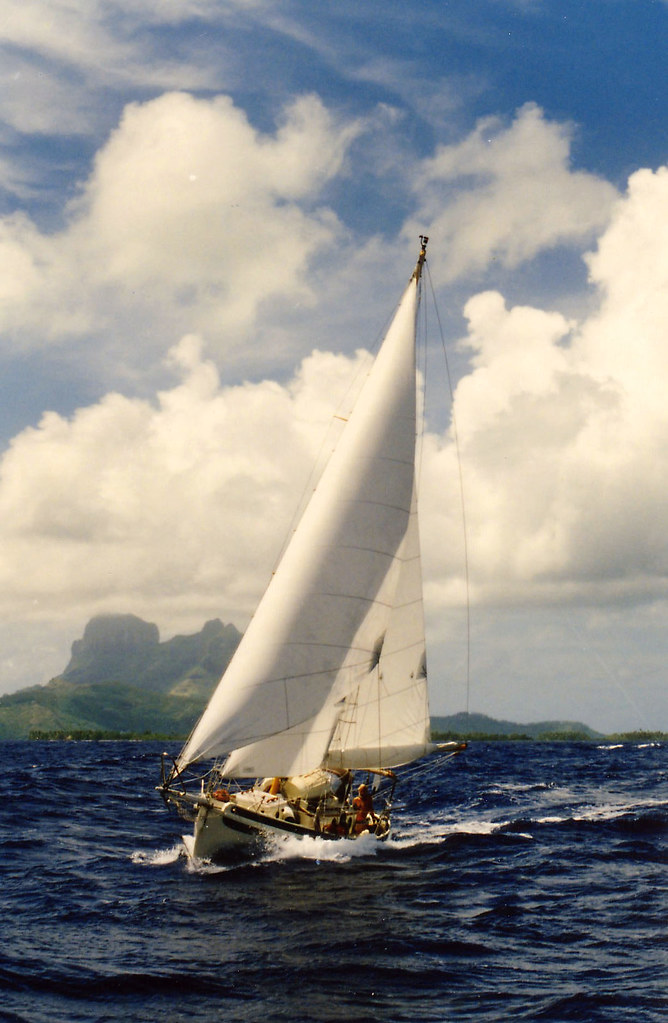 Ben,
I covered some of the problems of paint brands I’ve had on your recent string on painting on your BCC Elizabeth website. The company that made the green enamel has gone out of buisiness but I recently bought a qt of Petit Easypoxy that looks close. We never had wooden whale strakes–that area had green gelcoat. After 10 yrs or so, I gave it a light sanding and painted it the same color.

Painting the middle boards of the bulwarks a different color than the rest definately increases the work, but we think it’s worth it. We paint the off-white part first and don’t bother to tape off the green boards. After waiting about 3 days for the off-white to harden, we tape it off and paint the green area.

I don’t think I have a digital pic of the bulwark taped stage, but here’s one where the bulwarks were finished but not the aft areas.
Dan

Ok great, thanks for the heads up on your painting schedule. I’ll see how things go this spring timing wise, I wanna get out sailing this year, so trying to keep things simple.