Battery placement (was "Re Rigging question")

4D are bigger but Anhinga’s two 8G27 are installed under the quarter berth.
Any place is always a compromise…

Thanks Luis,
Yes I’ve eyeballed that space and it might work but right now our ICOM 802 main unit is in there plus the depth sounder transducer and a three month supply of paper towels. It might be worth a closer look. I’ve also considered a boxed-in shelf just aft of the galley bulkhead and against the hull where the port cockpit locker would be on a more recent Sam L. Morse production BCC. Would be the devil’s own work to get them in and out without risking back surgery immediately thereafter. Also, with a full icebox and four jerry cans of diesel on deck by the stbd shrouds plus a full bookshelf we already have a noticeable slight list to stbd. Hate to think what two 4Ds would add to that although it might make her a real racing machine on starbord tack! All things considered I am inclined to leave them where they are and ignore those lost 30 seconds per mile. Did not seem to hamper Mark’s success in racing her!

I suspect you did not have 4D’s installed when you waxed IDUNA. The original battery location on IDUNA was on the starboard side of the lazarette. When I rewired the boat, I built two shelves. one on each side of the lazarette. These were sized to hold two Blue Seas’ battery boxes. IDUNA’s house batteries consist of four Trojan T-105 6v batteries - two to each battery box. Each set is wired in series. The two sets are wired in parallel. Total capacity is 450 amp/hours or 225 useable amp/hours. This assumes the batteries are only discharged to 50%. The alternator and starter are wired directly to the house bank with a fused circuit. The switch panel is connected to the house bank through a 50 amp breaker/switch. IDUNA does not have a master battery switch. Because there is no battery switch between the alternator and house bank, it is impossible to burn the alternator diodes by disconnecting the alternator from the house bank via a battery switch while the engine is running.

This was the best location I could find for the batteries. Perhaps not ideal for keeping weight out of the ends of the boat. The location made it “easy” for me to install the batteries in their respective boxes. I selected T-105 because I could lift them (64 lb ea.) and the four batteries yielded a high amp/hour capacity for the dollar and space occupied. Certainly the location is not the best for speed or preventing hobby horsing and may have contributed to Lenora and I learning how to spell “ITCHEN.” Of course, after ITCHEN’s sails disappeared across the horizon, we both looked at each other and said, “We have been taken to the KITCHEN.”

At one time in the boat’s history, there were two group 27 batteries located under the port cockpit seat just behind the bulkhead separating the cabin from the engine compartment. Because I can hand crank the Sabb G engine, I did not see the necessity to install an engine starting bank. Now back to your challenge.

Considering the weight of the 4D AGM (129 lb) and the space available aboard a BCC, the only area I can think of for the batteries is the lazarette. The two 4D AGM batteries weigh about the same as four T-105 batteries. The differences are the T-105’s are “easier” to handle than the 4D’s and use a flooded technology vs. an AGM “sealed” technology.

Oh, I forgot to mention, after I wrote about your racing skills, the offices of the three presidential hopefuls contacted me and offered me a position writing speeches. Of course, my ethical center would not allow me to accept the offer. Further, such a job would take away from my hatred of boats.

I currently have 4 6-volt batteries wired in series/parallel; they are installed in the lazarette. I also have a dedicated engine starting battery under the starboard quarterberth.

I am not happy with the batteries in the lazarette, due to hobbyhorsing and the tendency for the boat to “squat” when under cruising RPM (do a lot of that here in the Pacific Northwest).

I am thinking about relocating two of the batteries out of the lazarette. One battery would go below the companionway ladder which, due to its size, should not interfere too much with the galley space. The 2nd battery would be moved forward to the port of the mast and immediately aft of the bulkhead forward of the mast. That space doesn’t get used for anything and, tucked in the corner, it would not interfere with seating arrangements. The disadvantage, of course, is the heavy wire that would have to be used, plus the need to build teak enclosures.

Any comments on this idea?

My only comment is will this correct the squatting problem when under power. Also does the end result justify the cost of the heavy battery cables.

At what speed does the boat start to squat??

Good questions! Not sure whether moving the batteries would prevent the squatting, which occurs at speeds in excess of 5 knots. The result is that the boomkin gets a continuous, yet light, salt water splashing. That did not happen until the batteries were installed in the lazarette.

Good questions! Not sure whether moving the
batteries would prevent the squatting, which
occurs at speeds in excess of 5 knots. The result
is that the boomkin gets a continuous, yet light,
salt water splashing. That did not happen until
the batteries were installed in the lazarette.

The amount of squatting under power is directly related to how close you are to hull speed. With big batteries in the lazarette, squatting begins at zero knots! Squatting under power always seems worse to me than squatting under sail, perhaps because the forward leverage of the mast when booming along at 7 knots under a stiff quartering breeze! For Itchen I find that it is noticeable but tolerable at around 2800 - 2900 RPM with our Yanmar 3GM30F and 15" MaxProp. 3200 RPM is about our useful limit, say 6.0999 knots when pushing to make an ICW bridge opening, and anything over that is pointless and hard on the engine and our ears.

Hi Scott,
What a great topic! Shaula (BCC #59) came with Sam’s standard (in 1981) 2 group 27 Trojans under the quarter berth. I added another to make a house bank of about 200Ahrs. This gave us a bit of an annoying starboard list, which we lived with. About 3 yrs ago, when I built a battery box for the 2 house batteries and installed it under the lift-up ladder, just forward of the engine bulkhead. We also switched to AGM’s. The ladder’s sides sit on the top of the box–the bottom step is just above the box.

We are very happy with this setup. I agree that the weight of batteries in the lazarette is not ideal. However, we do keep our valise liferaft and lots of other stuff there.

I am contemplating a similar arrangement to what you describe. Do you have a picture of your battery box under the companionway steps?

I don’t have a good picture, but will take one today and post it tomorrow.
Dan

Scott
Hope these pictures help you with your project. We?re now on our 2nd set of AGM?s?the first lasted about 4 yrs.

The size of the box was designed to hold the 2 house Lifeline AGM group 27 batteries (100 Ahrs each). The grey box on the starboard side of the box has the house battery 50A fuse and the Ample Power monitor?s shunt to measure amps in and out.

The two fore and aft pieces on the top of the lid keep the ladder in place when we?re heeled. The lid has pieces epoxied to its underside to keep it from sliding around. Both batteries are held down by the hardwood piece between them, with 2 threaded rod tie-downs through the aft cabin sole. The forward end of the aft cabin sole was through-bolted to a 2? X 2? hardwood piece which was then through-bolted to the floor (bulkhead) between the 2 water tanks. I didn?t want the battery box fastened to just the cabin sole, the forward end of which was only screwed down.

As you can see in IMG_0198, the battery box was reinforced by using 3/4?X 3/4? hardwood pieces on its outboard sides. Yes, the box is also held down with four ?? bolts on its sides?probably overkill. All the 3/8? ply, inside and out, was covered with glass cloth and epoxy, and all parts of the box were sealed with epoxy before painting.

We were knocked down entering New Zealand in 1995?probably close to 90 degrees over?and broke our boom. The dirty cutlery in the sink ended up in the starboard drip/hand rail, so I?m a bit paranoid about fastening heavy stuff down. Yes, we should have hove-to when the wind hit 35k and our speed increased to about 7k with only a small fully reefed main. We were slow to react (at 3AM) that time, but the lesson was learned. 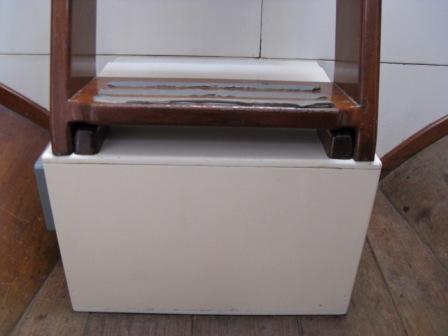 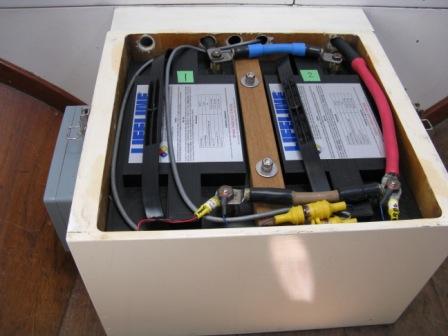 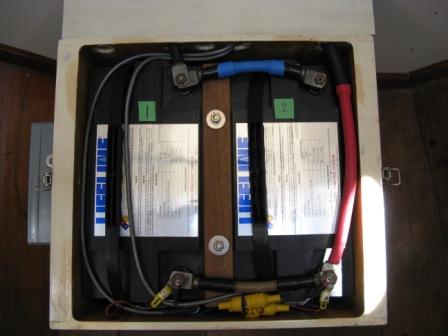 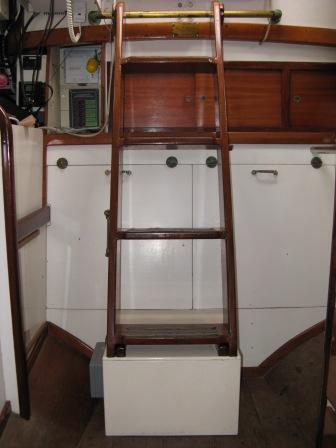 You did a nice job of constructing the box and fastening it down. I like the idea of taken plywood and glassing over it with epoxy and cloth. I refer to the end result as “super ply.” When I built the shelves for the battery boxes in the lazarette, I employed the same construction technique.

I am late chiming in to this thread having only just entered the digital photo world. My house battery is an 8D but the box is just large enough to accept a pair of 4Ds. No 2 engine starting battery is a group 31 in the lazerette. 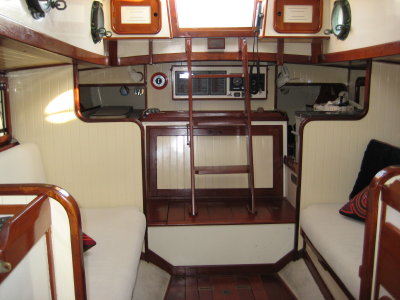 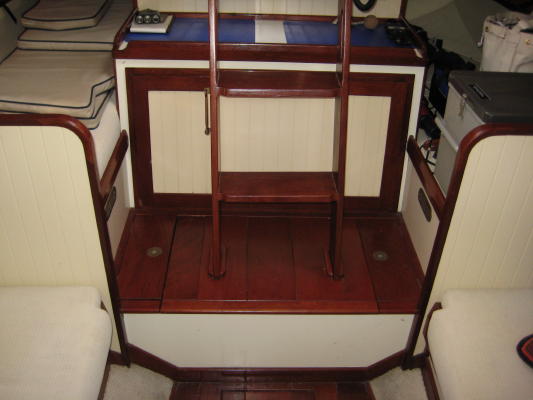 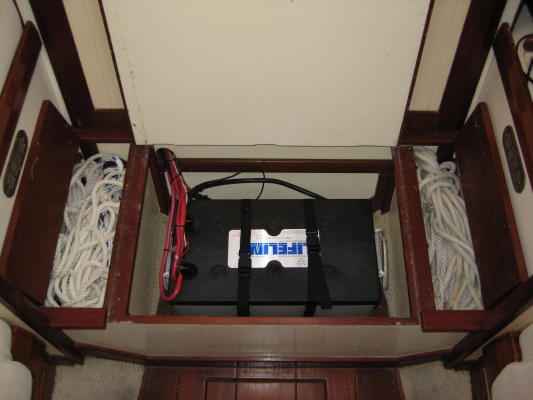