I received the following email from Craig and Vicki Johnsen, the builder of Ben’s VIXEN (BCC #2). Because of the time constrant, I’ve placing this here rather than in the FOR SALE category.

"On a bicycle ride this morning, I went by the Port San Luis (California) boatyard and saw one of Lyle Hess? Bristol Channel Cutters hauled out, looking pretty forlorn. She turned out to be the gaff-rigged BCC Chris and Dick Todd built, called CHATAUQUA, and she has been through a couple of subsequent owners before ending up abandoned on a mooring out in the harbor. I went into the Harbormaster?s Office and learned that it has been a long process but that she is going up for what is called a ?lien? sale on Dec. 18th. She is in tattered condition, though still sound of hull and deck. Apparently, she has a Saab as power, judging by the controllable pitch prop and she still has quite a bit of her cruising gear (winches, Monitor vane, hatches, rudder, gaff and boom, blocks, etc) present. The head stay is loose and the mast will require a re-build or replacement, but most of the rest is really just cosmetics. The hull shows no blisters nor any grounding indications?just neglect. No sails are visible, but the woman I spoke with indicates that there is considerable amount of gear below and they are hoping that someone will buy her rather than force them to take a chainsaw to her. She will be available for viewing on the 18th between 10:00 and 2:00, immediately prior to the sale. There will be a minimum bid requested in the vicinity of $8200+ to clear the harbor liens, taxes and storage.

If you folks know of anyone willing to take on such a project ? and it will take some serious effort ? she has good ?bones? and has made sound passages in the past. Please pass the word along, will you? (Vicky asked me if I wanted to take her on as a project, especially just after viewing Ben?s delightful video on VIXEN once again sailing. Got to admit that I am very tempted!)

All of our best,
Craig (and Vicky) Johnsen"

We spent many happy hours cruising with Cris and Dick in Baja, F. Polynesia and in NZ, and are sure sorry to learn of Chautauqua’s neglect. Sounds like a great chance to pick up a fixer-upper BCC!
Dan

For anyone interested, Chatauqua is up for auction right now. Auction closes March 23rd. 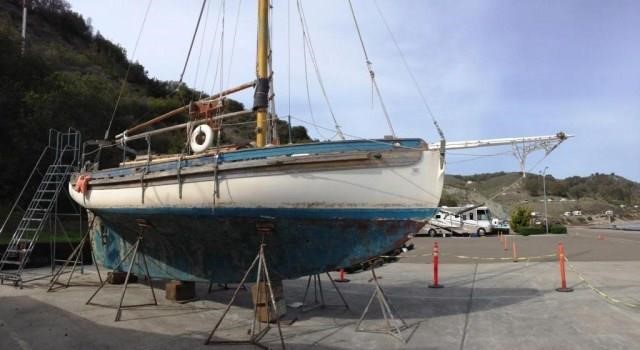 Too much of a project for me, but if someone has a hankering to bring a BCC back from neglect, and a spare spot in their back yard…

Cris asked me to post this flyer on Chautauqua on the forum. Cris is Hale Field’s daughter and Renegade was the family cruiser! Of course we all know that Renegade was the Lyle Hess 24’ gaff rigged cutter that inspired Larry Pardey to build Seraffyn, which inspired Sam Morse to build the BCC.

Hi David,
I’m interested in your bronze sink. Why did you decide not to use it in the end?

Hi David,
Please let me know the Barient winch sizes you have. I’m interested on one Barient 17 self tailing.
My email is ldordio@gmail.com

Mike,
It is actually a hammered copper sink that I was going to install in the heads compartment but turned out not to have enough clearance under the cabinet as AC compressor lived there. Anyway, if you’re interested I’ll send you photo and dimensions.

Louis, my two Barients are not self-tailing.

Mike,
It is actually a hammered copper sink that I was going to install in the heads compartment but turned out not to have enough clearance under the cabinet as AC compressor lived there. Anyway, if you’re interested I’ll send you photo and dimensions.

Louis, my two Barients are not self-tailing.