Hauled out in St Martin. Checking over my stanchions hen I removed them to paint my bulwarks I found a number of cracks in 2/3’rds of them. So I decided to replace with bronze. Found some nice 4 bolt bases and ordered solid bronze bar from Alaska Copper. With all the bolts and pieces it cost about $160 each. I will be making some brass bolts to attach to bulwarks. 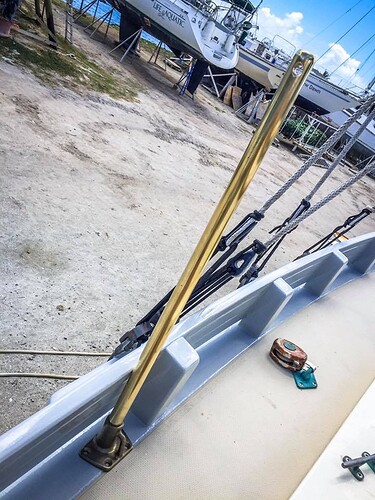 Did you roll & tip your bulwarks? They look awesome!

Nice! I am in the process of replacing my stanchions with bronze stanchions from Port Townsend Foundry. Have replaced the port side and refinished the bulwarks, still have starboard side to do.

Traveler,
No roll and tip. Difficult on small intricate areas like the bulwarks. Just prepped and brushed on Awlgrip. Used the cheap Fooler brushes. Awlgrip flows like engine oil. It is amazing. I thinned with their brushing thinner 25%.

Only problem is the expense. I got 3 coats per side from each 1 quart kit. At about $220 per kit.

A bit off topic from stanchions, but any advice on doing small touch-ups on the bulwarks? I’m getting ready to splash for my first season aboard Iduna and there are a few small areas where the paint on my bulwarks has failed and is chipping, or has just rubbed through from normal wear-and-tear. All she really needs is touching-up, but short of going full board and repainting the entire bulwarks, I’m kind of at a loss.

Any advice would be great!

Jon, ask Rod what kind of paint he used. Then let us know.

Basically I just use a 2 part putty to fill in the divot. Sand it smooth and a little of the surrounding area. Thin your paint to the max recommended. Do two coats. Second out just past your sanded area. You will be able to see the patch. But no one else will.

I use regular old Bondo.

Jon, just do a touch-up. Sand it a bit to rough the surface and apply at least 2 coats. After a few months, you won’t be able to see where you did it. At least that has been my experience. I use masking tape to mark the spots so I can find them for the 2nd/3rd coats. My paint is marine enamel–very old fashioned. It really helps to have epoxied the bare wood before first painting it. If that didn’t happen, you could apply some epoxy sealer to the bare wood before doing the paint touch-up.

We last sanded and painted our bulwarks and taffrail in 2007 in Gladstone, Queensland. Every year or two since then I’ve done a few spots of touchup. OK I admit there’s no gloss left on any of it. Right now I’d rather cruise Shaula in BC during our 3 month summer than repaint it. Compromise, as always. I did do a sanding and repaint of the taffrail and boomkin in the Spring of 2014.