Where is everybody, I’m finishing my boat and getting ready for long term cruising and I’d love to see any other boats and how they are set up. I still don’t have an asym but other than that it will be all plain sail. I have the tall rig and was almost hoping for a third reef in a summer gale last year. I’m also looking for all of the FC news letters, where have they gone.

I was just looking for the newsletters myself as I copied them to a hard drive a t one point. Unfortunately, It looks like I deleted them since they were available at the fc site at the time. Let me know if you find them. I’m itching for a read and some ideas to keep outfitting Mariko.

When I bought Bandit, Hull #2, she came with a complete (I think) set of newsletters… starting in 1981 and going to 2009. About 300 pages. I read each issue. It is nice to see a history of companionship. But even then, as seems to be true now, owners were far flung and often out of touch with each other. I suppose with only 41 hulls, the FC owners get busy with other things. There was one fellow who wrote in once to say that he’s had his FC on a trailer in his backyard ever since bought new as a kit boat. The interior was about 80% complete. He hoped to sail one day.

It’s too bad, though, that we don’t have a forum as strong as those that surround other boats, such as the Nor’sea, or vehicles, like certain vintage cars–I have had a few and have found the assistance offered to be REALLY helpful.

I set up a Facebook group called “Friends of the Falmouth Cutter.” FB has advantages and disadvantages of course. One advantage is that it is so easy to include photographs in each post, which helps a lot with technical issues. The advantage of a forum list, like this one, is that it is searchable.

I guess my solution is to post to a FB group like “Sailing and Cruising,” which has 20,000 members. They know a lot about boats. But they don’t know specifics, like how is the rudder made? Our rudders appear to be solid plastic. Much better than wood (no rot). It could be that the BCC list is more active.

In any case, I have the newsletters and I’d be happy to copy them and mail them–at cost.

You know where I’m hiding, or at least where Hopscotch is hiding.

Looking for your “Friends of the Falmouth Cutter” on FB but not finding it. Any ideas what I’m doing wrong?

Also, I’m very interested in acquiring a copy of your extensive collection of FC News. My FC came with issues of FC News spanning from autumn of 1997 through summer of 2006 but I’d certainly be interested in reading earlier (and later) copies. Let me know your thoughts on all this and thanks in advance for your time.

Sorry for a delayed reply. I haven’t checked back here much, partly because there’s so much of a gap in response. But yes, I have the FC News in toto. My email is calclements@gmail.com. Write to me there!

Peter, regarding your question about the Friends of the Falmouth Cutter, I’m not sure why you didn’t find it. It is a group on FB. There are about 6 members. 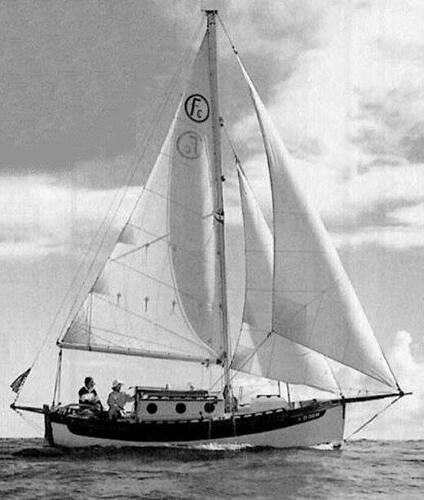 Friends of the Falmouth Cutter 22 Sailboat

When talking about the feisty wee Falmouth Cutter, it’s hard to be objective, especially with owners who are universally admiring of their boats. Ferenc Matte in his book The Best Sailboats in the...

I hope that works!
Cheers.

In an attempt to gather all the newsletters, I made contact with an FC owner, John Verlinden in 2007, who told me he had a complete set of the newsletters, and promised to forward them to me. Unfortunately, that never happened (See http://samlmorse.com/forum/read.php?7,11496,11499#msg-11499).

A Mr. Ron Walton sent me a few of the newsletters a few years ago, and these are on the website. He also advised me that I could glean them from http://homepage.mac.com/rwsailor/fc/fc.html but, unfortunately, this is a defunct website. The earliest one I can find is from December 1987. samlmorse.com/forum/file.php?7,file=1013

We have never been able to accumulate, assemble and index this data for you. If you have them all and can spare the time to send them to me, I will happily create space for them.

I still have all the newsletters plus the entire FC News website on my computer. I kept the website online after I retired as newsletter editor (its a no pension position for any volunteers) until Apple decided to stop hosting websites on their servers. Note I created the last version of the website using XHTML + CSS. It’s actually very simple in structure and did not involve Apple software in any way.

I think the natural place for the newsletters is on the Sam L. Morse website. I have no interest in hosting another website. But I think sending all of them to this site as attachments might not be easy. There are 57 in total if I remember correctly.

If John Cole would provide me a physical address where I can mail a CD / DVD, I would send him my entire website.

I don’t think the newsletters can be that voluminous, except perhaps for images. Perhaps you could e-mail them to me, as I now live in Spain, and don’t want to put you to the expense of overseas postage.

I have sent you a private message with my e-mail address, as I have no desire to attract more spam!