So, here’s an FYI in case people didn’t know this – which I didn’t know until recently. You shouldn’t crank your engine for too long without closing your seacock. The word on the street is don’t crank more than 5 or 6 seconds. If you have to, then close your seacock, and reopen it once the engine is running.

Here’s what happened to Teresa’s engine, a Yanmar 2GM20F with 800 hrs on it.
A bent connecting rod. 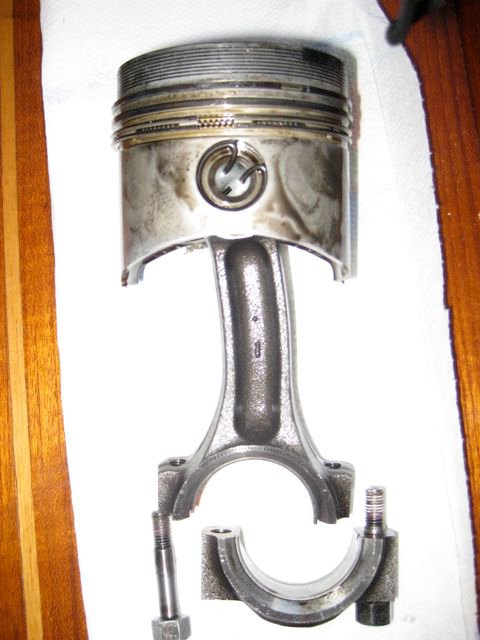 Thanks Ben. There is nothing quite like hydrostatic lock to make life interesting. In the Army we were instructed to crank the engine with the fuel turn off to check for hydrostatic lock. I may follow a similar practice with IDUNA’s engine.

Wow Ben. Thanks for the alert. That is something I had been entirely ignorant of. Fortunately, the old Sabb G-10 has started quite promptly, but I will now be changing my startup routine.

Ben,
Thanks for the reminder! So, for the problem to happen, the raw water pump has to fill up the already partially filled water-lift muffler, and then fill up the hose between the muffler and the exhaust casting where the cooling water is injected. That makes the length of that hose critical–the longer it is, the more water it holds. Its length can be increased by raising the casting by extending its connecting pipe, or by lowering the muffler. Lowering the muffler increases back pressure–not desirable. Getting an marine exhaust shop to weld a 6" or so piece of ss pipe into the middle of the Yanmar connecting pipe has worked to raise the casting on Shaula’s 3GM30F.

Was any conclusion possible as to why Daphne’s 2GM20,with only 800 hrs on it, was having trouble starting? I wonder if a serious head gasket problem would allow fresh water in to the cylinder? Probably not enough for a hydrostatic lock.
Dan Shaula BCC 59

There was no siphon break on the raw water mixer at the elbow… so this could have siphoned up fairly easily. Hose loop was only about 2’ long. On her 2GM20F, the run from lift muffler to exhaust casting is very short and straight… no elbow like on my 3GM30F (1990)

Not sure why the hard start. Never had that problem before. Which might indicate there was water backed up before we even cranked. We had left the boats for Christmas break and hadn’t run engines in about a month. Sea cock was left open.

Head gasket looked fine when I pulled the head off. No signs on gasket itself or on block of water marks reaching the cylinder.

Parts come in Monday… should be FUN putting it all back together… wish me luck!

Oh , Ben , you guys didn’t need that expensive lesson, so sorry to hear that, but thanks for sharing, as I need that reminder, too.

Too bad Marty Chin isn’t still replying on our forum, what a wealth of mechanical information he has.

Will you be able to tell us exactly what happened and how ?

Wonder if a placard mounted near the key would have alerted you to be careful , my old Pacific Seacraft 27 , had a placard like that and it always alerted me, way back then .

First off, I admire you two greatly for taking on this project on your own! That takes some guts (and a tight budget?). It’s great that both you and Teresa can benefit from this experience, and that Teresa is willing to let you help out. Some gals would (shelfessly?) want to do it all by themselves.

On the loop 1), Yanmar provides two options, I guess for engines mounted below, or above the waterline. The option you and we have involves two castings and a length of pipe between, and raises the level of the cooling water injection into the exhaust gases. Since the Yanmar 3GM30 and 2GM20 have a lot of parts in common, maybe Daphne needs the more expensive option? This has the advantage that the volume of cooling water able to be contained between the muffler and the top of loop 1) is much greater than the volume between the manifold and manifold with the other Yanmar option!

Does it seem likely that Daphne had siponing in any of the loops? I’m guessing that the problem was that difficult starting caused water to back up from the muffler into the manifold/head/cylinder.

It sounds like the reason for the hard starting remains a question. Be careful in positioning the head gasket. You may notice that in one position, the distance between the cylinder wall and the cooling water port is less than 1/8"! I heard of several other 3GM30F’s that had head gasket failures with very low engine hours, back in the early 1980’s.

Hard starting can have lots of causes can’t it, so it will be interesting if the problem is still there after it’s all back together. Good luck!!

We do have an excellent mechanic guiding us through the process, so that gives me the confidence to tackle it with my own hands.

Teresa’s 2GM20F has an exhaust mixing elbow like the one pictured here in the service manual. It’s a straight run down, no 180? elbow.

I’ll keep you up to date on the progress as it unfolds. 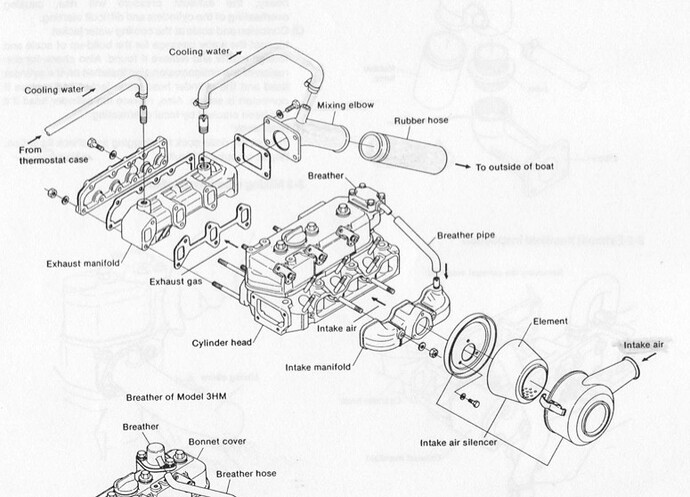 The 3GM30F has that same straight elbow as an option. Does the 2GM20F have the riser option, like we have?
Dan

Good question… That’s interesting, I thought her version of the mixing elbow was the more “advanced” version, since it didn’t require the frequent part replacement. Good to know ours is the “upgrade”. I love bragging rights…

I checked the workshop manual and the 2GM20F did have the raised mixing elbow option back in 1988.

I was talking to the manager of our local West Marine store the other day, and she said their 2GM20F was being rebuilt after getting water in a cylinder. She didn’t know about the riser details, but she did say there was no loop/siphon breaker installed in the cooling water line. Instead of going cruising starting in May, she will continue working several more months to pay for the repair!
Dan

Thank god we had Jim Galvin as a mentor. When and if anyone is ever in Miami with engine trouble – Jim is the guy to call. He answered every one of my calls, gave me invaluable info about how to go about this repair. He talked me through every step. He even called on his own to check on my progress. It was his brain/experience and my fingers doing the work.

Total cost of repair was about $600 with parts, some labor and injector testing.

We installed a siphon break in the raw water mixing line, and never crank more than 5 seconds without closing the seacock now.

Ben,
Congratulations on getting through a huge job! Teresa mentioned that before the total failure, “the symptoms over the last month (were) white smoke, knocking sound, fuel in the water, low RPMs”. Are these problems gone now? Sure hope so. Is it still slow to start? Did the mechanic discuss the other mixing elbow option?
Dan

We’re on our way to Bahamas tonight, hope the engine doesn’t act up half way across the stream.