I am trying to figure out how I can prime this darn fuel filter on my BCC.

I would like to put in some sort of priming pump or bulb that will fit between the tank and the primary filter. In the link below to the picture, the red area is the line that comes from the tank. As you can see there isn’t much room for a bulb and I would prefer something non-electric. 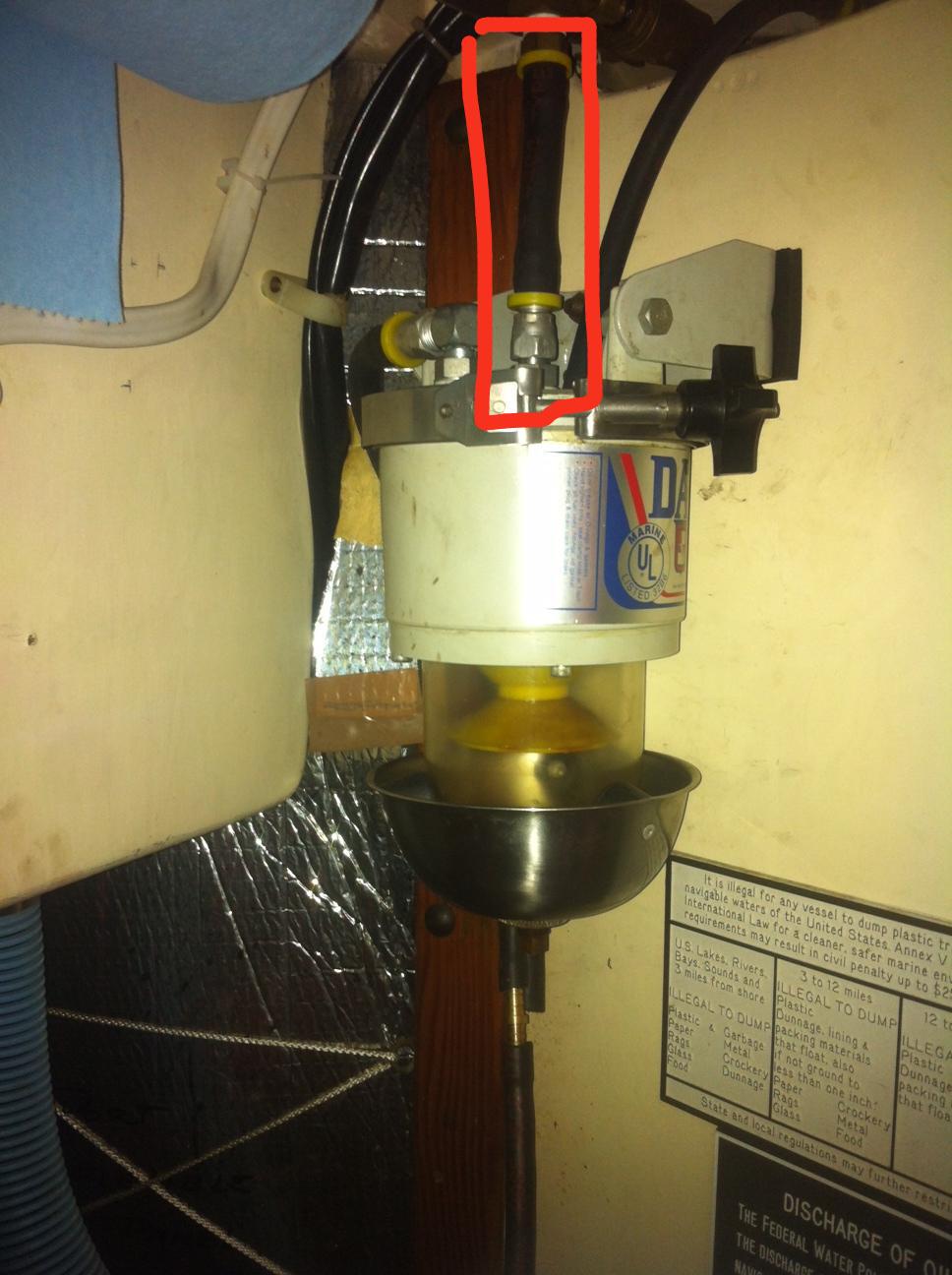 Does anyone have any suggestions or know of a product that I could put in line there?

Hi Ben,
I don’t think a priming bulb between the tank and filter is a good idea, safety-wise. Maybe I’m paranoid. I’ve used the lift pump on the engine to refill the filter bowl after replacing the filter element. It’s tedious to work that little lever up and down until the bowl and line fills and fuel flows from the bleed valve. I guess this process is what you want to improve? Some folks pour fuel into the bowl before putting the lid on to reduce the lever work. Be aware that the lift pump on Yanmars and Volvos (don’t know about your Buke?) run off the cam shaft. If the cam shaft is pushing the lift pump diaphragm, the lever on the pump can’t function and the fly wheel needs to be rotated a bit.

Another solution I’ve known folks to use is to bipass the lift pump and install an electric pulse pump.

Normally I have a bulb installed between the primary fuel filter and the lift pump. Currently this is actually disconnected and I have the fuel line running into a Jerry can to make sure that the fuel filter housing is primed.

If I hook the fuel line from the fuel filter back to the lift pump I don’t think that will resolve getting the filter primed. I can definitely give it a try though.

I’d hook the line back up, open the bleed valve on the high pressure fuel pump, and toggle the lift pump up and down until you have fuel coming out the bleed valve (with no bubbles). It may take 5 or more minutes before anything happens. Make sure there are no air leaks at filter lid and at hose clamps all the way back to the tank. It sounds like you have a lot of air in line? Maybe you could try adding some fuel to the line before you connect it to the filter. The lift pump may do better pulling fuel rather than just air to get started?

Although you would rather not use an electric pump I have found that the one I installed on the fuel line from the tank has worked well for me. I used a couple of T valves to install a 12v pump purchased from an auto parts store on the fuel line. All I do is turn the two valves and turn on the pump and the filter bowl fills quickly and also bleeds the fuel lines right to the injectors. Changing a clogged filter on a rough ocean is not fun. But with the electric fuel pump it is very quick and easy.
Ron Thompson
Ho’okahiko 97

Ahoy Ben , my tank and fuel filter are further apart , and I added a Yamaha outboard motor line bulb squeeze pump in the feed line , this works for me , but have you considered putting some air pressure into your fuel tank vent line ?

Also does anyone have an idea of how to trace a small air leak between the Racor duel / switch over set up , maybe pressurize that line ?

bit of soap liquid and a paint brush, stand back and watch for the bubbles…

You’ve no doubt checked that your squeeze blub is orientated correctly. If the bulb is OK, and there are no air leaks between the bulb and the tank, then maybe you should check the tank’s vent. If you open the tank’s deck fill, you’ll bypass the vent. You mentioned (via telephone) that the engine runs fine for a minute or so and then stops. Sure sounds like fuel starvation, doesn’t it?

Nigel Calder in his book on marine diesels mentions placing a bulb between the tank and the primary filter, but warns to make sure it doesn’t introduce too much resistance for the lift pump. He mentions that there are bulbs designed for diesel fuel. Ron’s setup, using two 3-way valves to divert the flow to an electric pump ONLY used when bleeding the line, looks like a great improvement. I think I’ll put it on my job list! In your case, with so little room between the tank and primary filter, it might be a challenge.
Dan

Thank you everyone for the thoughtful replies.

Once she is running, it sounds really phenomenal. It idles, it stays steady at higher RPMS and generally just runs well.

I am starting to think it is more of a fuel delivery issue somewhere from the primary. Tomorrow I am going to follow your advice Dan and take the fuel filter out of the question and run a line to a jerry can and see how she runs from there. Now that you mention the bulb, I’ll also take that out of consideration in case the fuel pump is having a hard time pulling through the reduced diameter.

Ron, thank you for your suggestion on the electric priming. I think I’m with Dan, I’ll put that on my list. Dan, maybe we can draw that out together.

Ben,
If the engine runs fine once it’s started, it sounds like you have fixed the engine bleed problem and don’t have any air in the fuel lines. Unless I’m missing something, it sounds like a starting problem, not a bleeding problem? Difficulty starting older diesels in cold weather is a common problem. I’ve had that problem with my Yanmar 3Gm30F since we returned to Seattle from warmer climes in 2008.

I can’t remember if you did both the rings and the valves on the rebuild, but if you did, it seems like you should have great compression. I think my engine (now with 6000 hrs and 23 yrs) is worn enough that lack of compression when it is cold is a problem. Cranking it sometimes took a minute or so. However 20 minutes seems excessive.

My crank time was reduced after the injectors were rechecked and one was found to be out of adjustment. Starting in cold wx improved to about 10 or 15 seconds. In the summer, maybe 5 sec in the morning. The problem will no doubt get worse.

My Yanmar mechanic doesn’t think much of cranking with the compression released because diesel fuel washes the lube oil out of the rings and dilutes it. I guess you could pull the stop engine lever–maybe you do?

Are you SURE your battery is in good shape? Cranking really fast can make a big difference. You’ve probably checked the big pos and neg wires between the battery and the starter motor–terminals are clean?
Dan

All right after a weekend of toil, I have made some progress:

Dan, I think you’re spot on with the poor battery. If I turn the battery over for about 10 second and then let it sit for about a minute and then turn it over for about 20 seconds she will run. After watching a couple videos on youtube of people starting their Bukh DV20s, its clear that they are turning the flywheel at a much greater speed. I’ll be building another battery box and purchasing a dedicated starting battery.

I took Vixen off the dock on Saturday. We motored about halfway to the Fremont bridge and about there I bumped up the RPMs to 1700. Thats when she started to start dropping in RPMs and eventually died. Oh no, right in the canal! We turned he over again and she started right up.

We continued on our way at about 1400 RPMs and then I bumped it up again and alas, same thing, she slowly decresased in RPMs and shutoff. So I turned her over again and we motored back at a lower RPMs to the dock.

This is what I think: The fuel injection timing is a little bit too early. When I was rebuilding the engine I left 2 shims that fit under the injection pump off for some reason. There was a good one, I promise, but right now I don’t know why. Anyways, I’m going to put them back on the next time I get to the engine and I think that should solve the problem. I am also getting a bit of knocking at higher RPMs.

In the meantime I’m waiting for the Coast Guard to send me my documentation so I can get registered.

Thanks for all your help!

Well I haven’t figured out why the engine dies at over 1400 RPMs, some have suggested a potential fuel lift pump problem. It certainly sounds and feels like fuel starvation.

Regardless, she runs fine at 3 knots and I’m pretty excited about that. First time sailing this weekend in over a year on Vixen and we had a blast! Check out the video…

Woohoo! I feel your joy Ben!
Just took Shanti out for a week after 3 years refitting.

Make sure both of your fuel filters are clean. Sounds kinda like fuel starvation.

Awesome, congratulations to you as well.

Did you do the tanks and filters before or after the problems showed up?

I did the tanks before the problem showed up. Basically when I bought the boat, the camshaft was broken. I spent the summer rebuilding the engine and also performed other maintenance to make sure that when I began troubleshooting getting the engine running for the first time, I had already removed as many variables as possible.

This included removing all the old fuel in the tank, cleaning the tank, and replacing all the fuel filters. After running the engine for a while and having this issue of the engine slowly dieing after 1400 RPMs, I decided to replace filters again. No luck.

Sorry I am late to this conversation. Leaving the shimms out was not good, but I don’t think that is your problem. Sounds like something is restricting the flow of fuel to me. The engine is not getting enough fuel to run are higher rpm’s. Especially since you changed your primary filter on the engine. Not once but twice.

More problems occur when changing that primary filter. There is nothing in line between that and your fuel system to catch crude. It is so easy to pick up a little piece of dirt that will clog your injector, or even slow down the supply of fuel.

Hope you get it sorted.

I am now thinking I didn’t actually leave the shims out. I haven’t had a chance to re-look at the fuel injection pump to verify.

I have a fuel bulb in line right after the secondary fuel filter. I am thinking it may be possible that it is restricting fuel flow by decreasing the diameter of the fuel lines. This seems unlikely to me however as much larger engines use fuel bulbs of similar designs.

Hi Ben,
Great to hear that you got Vixen out for a sail! Did you get a new battery? After the engine dies, you are able to restart it immediately aren’t you? Maybe that is a clue to the problem? Or maybe not? Do you still have the knock and the exhaust ‘smoke’ that we saw the other night?
Dan

I have not bought a new battery yet, I need to build a new battery box on the Port side. I am going to try and do it over the holiday. The engine does start back up pretty quickly after it’s been running.

I only really get knocking at over 1400 RPMs, otherwise she purrs like a kitten. Still smokes a lot though, same as when you took a look at it.