I was wondering if anyone has any experience sailing their Falmouth Cutters in any large seas in open ocean and how she performed? I have just started sailing mine this summer and have only experienced four to six foot seas but would like to venture much farther and really curious if anyone has personal experience in much larger and if you have any recommendations?

Yes and no, I have experienced very rough conditions in both the Straits of Juan De Fuca and Georgia. Lots of wind large short period swells. it was both beautiful and frightening. As you start to top upper 3o’s of wind she starts to loose the battle. They wont sail even reasonably to weather in 40 sustained. off the wind they are fine in those condition but can roll miserably like most if not all boats. Its very important to understand the limitations of your vessel. Id sail my boat just about anywhere but still, you just cant develop the power to drive these little boats. Fyi the second you start to think you are loosing steerage off the wind heave to, you have already waited too long

Thanks for the response, very helpful. I was wondering what your typical sail arrangement is when hove to in 30 plus wind conditions? Do you use parachord on the tiller to lash it to leeward? How well does she behave? 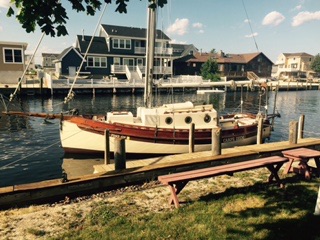 I’ve only ever done it on my FC for fun, theory and practice but she rides beautifully and instantly under main alone. It’s just as easy with a small jib. Because I live in an inland sea there are always hurricane holes to pull into so I would never need or want to heave to other than for sail changes or lunch. Everywhere you go here is a lee shore so heaving is a short term thing. Get out and play with your boat. While they will never live up to the repution they have been given the FC is truly one of the finest boats on the planet.

I can agree with you on all accounts, especially the quality of construction, design by Mr. Hess, and pure beauty these cutters posess! Just last week we got the leftovers of Harvey here in NJ and were on a reach in about 20 knots steady with Yankee only when we got hit with about a 50 knot microburst broadside, I jammed the tiller to leeward instantly and my FC was buried up to the side of the cabin in the wash, with water almost swallowing the port side of the cockpit. My wife and son slid down the seat with the look of Quint at the end of Jaws as the shark is chomping, but I had no worries, knowing that she would pop right back up as we came into the wind, and she did. Next day we saw a steady 35 knots with gusts to 40, and rode it downwind in about five foot whitecaps, with the rolling, but we were pleasantly comfortable as we settled in, and slightly quartered off the wind to ease her motion. As we surfed down the following seas I could feel all that extra lift and buoyancy Mr. Hess sculpted into the aft end with the wineglass transom and the reverse curves, and steering was never even affected because that glorious rudder sits so deep! What a masterpiece! I have hove to with main alone in about 20 knots and can agree that she stalls instantly, and I will experiment in stronger conditions. Thanks for the info.

One summer day sailing inland on Pensacola Bay, a isolated storm roiled down with some quick pretense seen on the water surface and dark looming horizon. Waves maybe 2 feet so the waters were calm, but gusts easily topped force 6 for a few moments as the front passed. These brief isolated lows move quickly and seem to arrive right at that lazy moment of sun, cool gentle breeze and my personal bad habit of napping while Lagniappe sails herself.

Lagniappe’s staysail is always up, having one reef point which has never been used. Hard-a-lee positions her hove-to instantly, and better than dropping an anchor. Lots of sail settings keeps her windward at 1 or 2 knots while stirring a windward slick. Full staysail without main and windward tiller is fine, a windward staysail and leeward main with 2 reefs and loose tiller gives a bit faster windward heave-to of about 2 knots. Surely lots of combinations left to discover for heaving-to depending on sea condition. Learning to effectively heave-to with Lagniappe has been the most important learned skill over the years. Lagniappe is born for heaving-to, much better than the Westsail 32, Lagniappe’s predecessor for this captain.

So the devilish summer storms will blow Lagniappe to a 50 degree heel with a full windward staysail without a main and about the same or a little more with a leeward main and 2 reefs. Since I’m basically lazy I prefer to keep the headsail bagged, full staysail and main with 2 reefs for those days where force 6 gusts seem to appear right around naptime.

Without reef points, and certainly with headsail, staysail and a full main, Lagniappe will not come about in force 5+ winds, as most boats will not. Should this be the case, then bring in your main and gybe, cautiously so as to avoid the infamous Chinese Gybe (one reason I no longer carry a genoa). Leave your headsail and staysail to windward, get your bearings and first drop her main, then headsail if you can. Lagniappe’s sails are all hanked-on for a quick drop when needed. Downhauls never worked mostly because they tangle and flap all over the place with sheets and halyards and sails during those precarious times of realizing my nap was a little longer than it should have been, all the while landing multiple bitch slaps in the face from Lagniappe during personal outburts of profanity. Not a pretty scene and certainly not suitable for proper seamanship aboard Lagniappe.

Staysail alone will not provide enough power without the main to maneuver in strong winds. Lagniappe’s staysail was loose footed for a few years, a habit learned aboard the Westsail 32. Rather, a sternly sheeted staysail and 2 reefed main is her preferred set. Lagniappe will come about up to force 6 winds if the seas are not much over 3 feet. For anything over force 6, dropping the staysail should get her to come about, but by then I’ve already gybed and hove to with stern concentration on sphincter control.

Without too much pride, much must be said about Lagniappe’s one cylinder diesel thumper and her feathering prop. Pensacola pass is known for a quick turn of events. One evening Lagniappe and her two crew left Big Lagoon for open water with 4-5 foot seas and a 15 knot headwind. Staysail only at the time and free footed at that (a rookie mistake). Winds and seas building, Lagninappe would not come about and 10 foot seas against the tide precluded a gybe. There was no room for heaving to and she was in irons with loss of an effective rudder. Lagniappe’s engine started instantly and motored her and her two crew safely offshore. An hour later after the compulsory heave-to while heaving-a-stern, and final collapse for 20 minutes on the cabin floor, we awoke to a smug and capable Lagniappe making a solid 2 knot headway and broad windward slick as if to casually reply ‘…um, really? … don’t embarrass me again, or stay home and I’ll do this by myself, okay?’. It’s nightfall and seas continue to build. Our options were to stay at sea or go through the pass again and anchor. As a rookie not yet fully confident in the art of heaving-to with Lagniappe, we dropped all sails and surfed our way through the pass with 10 foot seas. It was the first real trial with her feathering prop. There is something mysterious about it with a big wave from astern. I swear her prop kept Lagniappe from pitch-poling. As the wave lifts her stern and the surf begins (exhilarating!), her prop seems to flip and actually brake. I’m embarrassed to explain it because it smacks of ignorance and pride, but it’s true. Since then, I’ve cared for the engine and prop as if it’s a final lifeline for Lagniappe when the captain can’t seem to get it right. Over time, engine and prop will likely play a lesser role, as Lagniappe gradually gives up her secrets as to what makes her happy in precarious seas.