Height of bimini and/or boom gallows

Hi all,
About to order a new main sail. I thought I would set things up for an eventual dodger/bimini while I was at it.

what I plan is to start with a bimini, then have a doger built. So for now I will run the bimini from the bottom of the boom gallows to a SS bow.

My question is, how high does everyone have there bimini? Can you stand up under it in the cockpit?

As of now if I used the bottom side of the gallows I would not be able to stand up. I am 5’9".

When I order my new mainsail I will have it cut with a shorter leech so I can raise the boom gallows. Thus giving me about 4 ’ of clearence for a bimini.

Gary,
Here’s some pics of Shaula’s bimini. I think it’s important to be able to look forward over the dodger and under the bimini, while standing up. So attaching a bow to the cabin side is a the way to go, not using the aft edge of the dodger, as we did on a previous version. I’ll take some measurements and more detailed pics later today.

On the boom gallows, I used some Al extrusion that accepts a bolt rope. Bending the extrusion to fit the gallows curve wasn’t difficult. To counteract the bimimi’s aft pull on the ss bow, I’ve run some 1/8" low-stretch lines from the top of the bow, down to the handrail. This still leaves enough room (barely) to launch the 7’ fatty knees.

We love this bimini for the protection it gives us from the sun (important in the tropics!) and from the rain (important in the Pacific NW!). It does tend to vibrate when there’s a strong wind on the beam. To reduce this, I added a grommet about half-way back and use a light cord to pull it down to the aft end of the dodger’s external handles.

We do have to lean outboard to look at the main, but think that’s a small price to pay for all the protection. We had the bimini made with a zipper at its aft end so we could quickly roll it up and tie it to the bow, but have yet to use that feature.
Dan Shaula 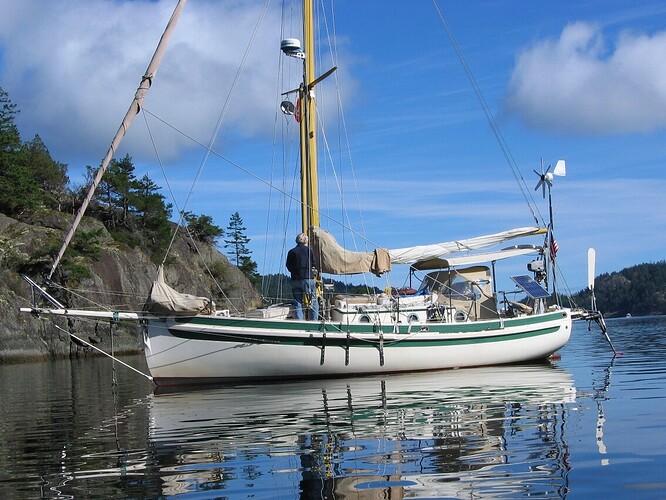 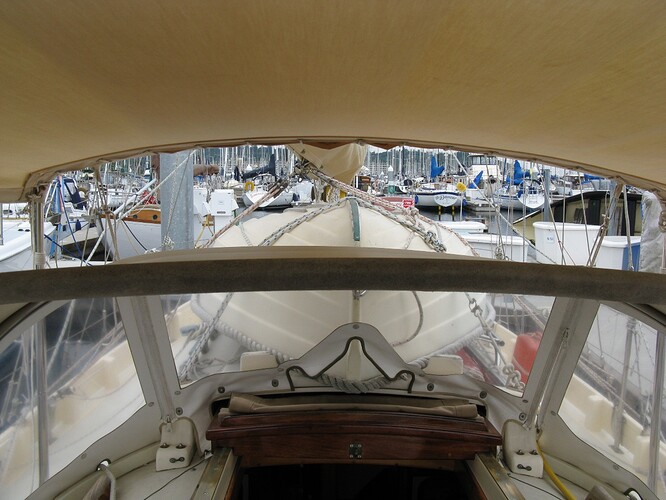 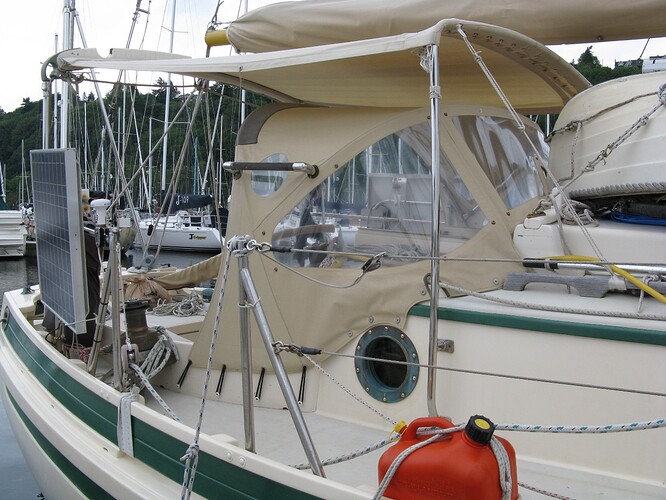 Thanks Dan,
I generally hate dodgers because of the visibility issues. But we do need a bimini down here in St. Thomas.

I will consider your setup…looks good. But I also like the idea of a small bimini off the trailing edge of the dodger.

More to think about.

Hi Gary , Over here in S’pore we need the protection from the sun as much as you do.

This barely allows stand-up room in the cockpit, but does allow a 6" tall view fwd over the dodger, sorry I am only 5’-8" .

Often times this bimini stoping at the gallows doesn’t stop the sun when it is at a lower angle and the sun is shining through over the stern. I usually have to clamp on a beach towel or spare canvas onto the back of the gallows, letting it drop down vertically.

I usually un-snap and roll over the bimini on top of itself on one side or the other depending on which way the sun angle is coming from , I will try to attach a photo.

This bimini has it’s draw backs , but it works fairly well for us, and we get-by with it for now.

Since you and I love our boat bronzes, a word of caution ,I discovered a serious crack in my original bronze boom gallows stansion pipes. The crack started at the upper end of the pipe, and was continuing down through the middle of the ss set screw holes, about 3" long . I imediately stop-drilled a hole at the end of the crack, then drilled a bolt hole through the pipe perpendictular to the crack and then through bolted the crack closed . Don’t know if any other owners have had this problem, and don’t know how long this fix might last ? On the attached photo near my right hand you can see the two ss set abandoned screw holes and the “stop drilled” 3/16" hole about 3" lower down that stansion, facing fwd . 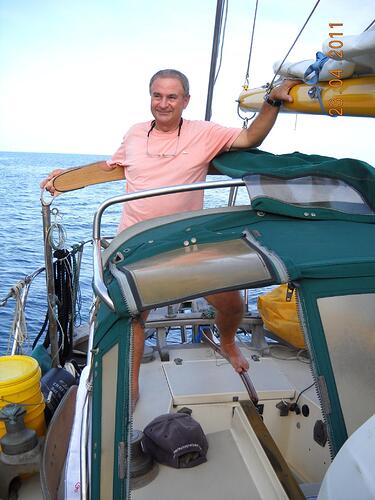 Well I pulled the trigger on a new main and staysail yesterday.
got a full batten main, loose footed, 15% flatter cut than normal,3 reefs. Got the staysail with just one reef since I will be getting a storm sail also.

Had the leech cut about a foot shorter so I can raise the boom gallows a few inches and give me headroom for the bimini. I plan on getting a single bow made and run the bimini from the gallows to the bow w/tie downs to handrails. this will be temporary until I get a dodger a year or so from now.

I’m curios as to what the standard height was for the gallows. I measured mine from the deck to the bottom side of the gallows and got 3’5". At 5’9" my head just brushes the boom when it sits in the gallows and I stand in the cockpit. my gallows are SS by the way.

Gary,
Shaula’s boom gallows are supported by SS posts with welded braces. The original brass or bronze (?) posts with bolted on braces were much less solid. I think it was the same as Doug’s.

I’m glad to hear that you’ve decided to go with a SS bow that raises the bimini above the dodger that you’ll add later. It looks like Doug’s version has the bow at the aft end of the dodger and is part of the dodger frame.

I raised the gallows when we had them done in SS and the bottom of the gallows is now 4’ 7 1/2" above the lazarette lid. The SS gallows post is 4’ 3 1/8" from deck to bronze casting. The SS bow is 2’ 3 1/2" above the companionway hatch. I’m 6’ tall and this gives me about 1/2" to 1" clearance above my head when standing in the aft half of the cockpit. I don’t recall my head touching the bimini while standing anywhere in the cockpit.

When the boom is seated on the gallows, it does not touch the bow. However normally I use the topping lift set so that the furled sail is raised high enough so that it and its cover don’t touch the bow. 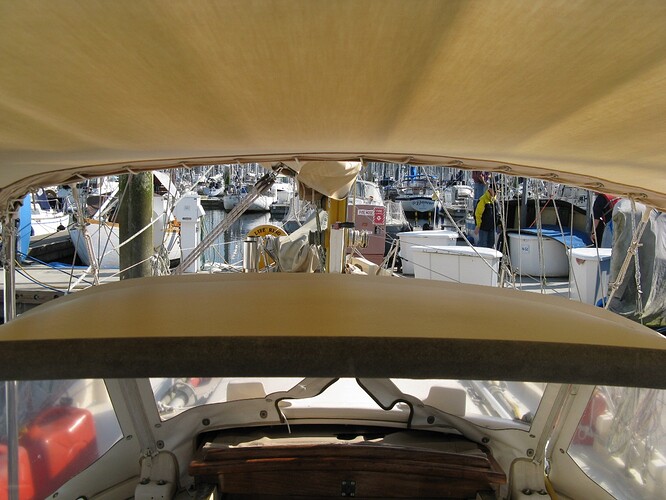 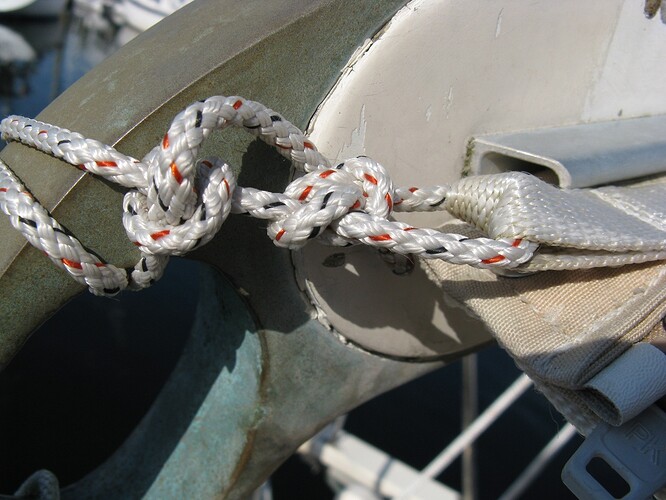 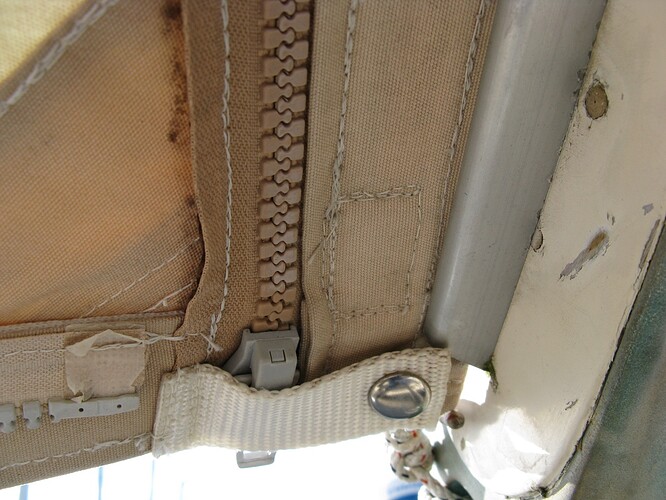 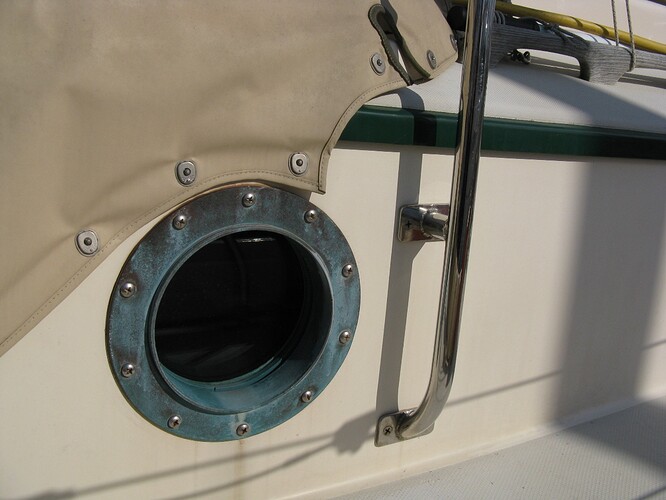 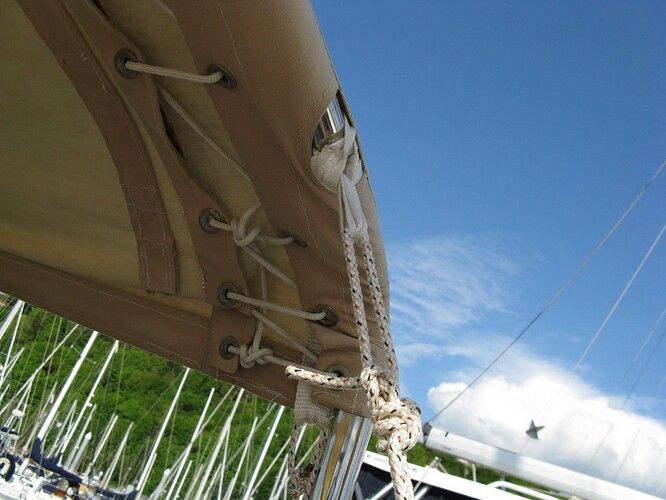 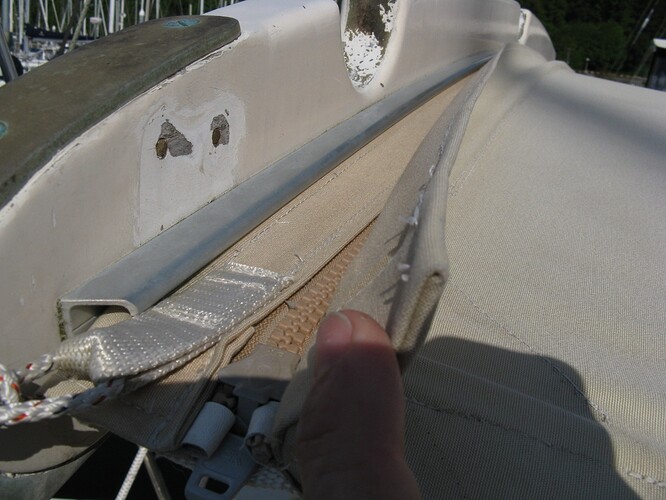 IDUNA’s gallows is 49.5" from the deck measured to the bottom of the gallows. The gallows is 6" wide. We connect the bimini to the center of the gallows and the top of the dodger. I am 5’ 8 9/16" tall and do not have standing headroom.

Was that from the main deck or the cockpit deck?

My stats were taken during the evening whereas, I suspect your height was measured early, very early in the morning. Further, my measurement were corrected for variations in gravity and normalized to national standard gravity. Regardless, anyone taller than us is abnormally tall.

The bronze pipe gallows stansions are way too heavy as well as the dining table leg, so I wouldn’t mind replacing them with thin wall 316 ss tubing .

Gravity has a heck of a pull on my boat too, the bottom of the wave troughs come up way too quickly , especially on that patch of water between Tonga and NZ !