how much does the fc weigh?

I’m searching for a someone with a truck to pull my boat to port Townsend but for the life of me can’t figure out the actual weight. My guess is that the trailer is 2k and the boat 5150lbs. That’s assuming that In the displacement Lyle accounted for two humans at 750 each for food water and gear. Also it’s my understanding that the boat was intentionally Under ballasted by 750 lbs 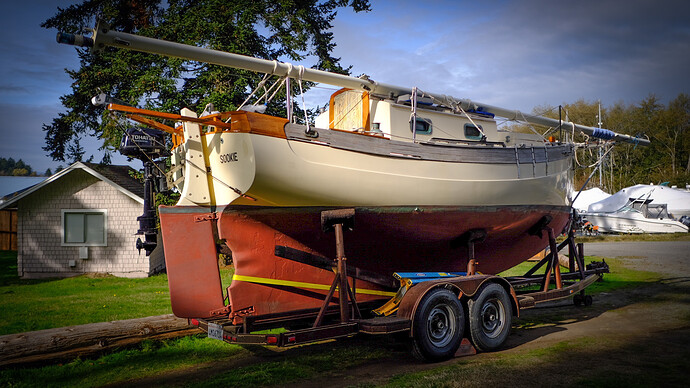 By Archimedes’ principle, an FC weighs what she displaces. The design displacement is 7400 pounds, so her design weight is 7400 pounds. In practice boats often weigh more than their designed weight. And then there is all the extras on board.

I have owned 2 FCs. According to the scale on the same travel lift, one weighed about 8000 pounds and the other about 10,000 pounds. The travel lift operator said his scale was only marked in 1000 pound increments, and I assume that the scale was not that accurate for lighter boats simply because the operator needs to know the weight most precisely when it is near his maximum load.

On a trailer you need a truck which can tow more than 12,000 pounds to be safe. Probably more like 14,000 pounds towing capacity if you have a lot of stuff on board.

Thank you so much. I was erroring there opposite and guessing 5k