I have solved my lee helm problems and come to some interesting conclusions. its a little to long for here, so visit my blog at http://www.garyfelton.com/shanti/

interesting stuff gary. would love to sail your boat, with the new sails and see how she goes!

Hi,
I am trying to get a “light air” sail made. The sail-maker wanted to know whether I wanted “free drifter” or the one in a sack.

Even though the boat has an attachment (in front of the mast) for a spinnaker pole (I guess) it didn’t come with one.
What is the difference between cruising chute, spinnaker, gennaker, drifter, reacher and an asymmetrical spinnaker?
Honestly which one I need? Which one will take me to Bora Bora?
Cheers,

I have a spinnaker pole which I will happily donate - you pay the freight!

If I were purchasing a light air sail, I would buy an an asymmetrical spinnaker with a soak. Hopefully, BCC owners that have these sails will chime in on this thread.

Hi Mehmet,
First:
An Asymmetrical, gennaker, and cruising chute are pretty much all the same. A lot depends on who you buy it from and what they call it. They are basically spinnakers that are designed to be used without a pole. The luff and leach are asymetrical in length and the cut is not as full as a full spinnaker. These are usually handled with a sock, or even a single line furler.

A full spinnaker requires a pole and 3+ people to safely and effeciently fly them.

A reacher is a similair to a drifter or genoa, but designed just for reaching. Probably not something you would need.

Since going to Bora bora requires a lot of trade wind sailing I would recommend a drifter. You can use it upwind or down. For the downwind work I would recommend a whisker pole (Johns post above!) also. In the trades an asymmetrical spinnaker could be a lot to handle, and not work for light upwind sailing. If money were no object I would have both.

Have one built with a ultra low stretch luff line like Dynex Dux. Then set it flying (not hanked on). This way you can use it often even when you have roller furling.

Good advice. I always thought an asymmetric spinnaker could be flown 60 degrees to the wind. Granted the drifter is very versatile, especially on the wind.

I’ll also agree with Gary – non hank-on is the best. My drifter hanks on, and is a bit of a hassle… however, very versatile.

When we owned our little aft cabin Flicka, we set the hank-on drifter above the jib without removing the jib hanks from the stay. It worked very well and eliminated the hassle of removing the jib. Of, course, this assumes the jib is not a furling jib.

I too can leave the job hanked on and put the drifter above the jib. But climbing out on the sprit to unhank the drifter after the wind builds – because it always builds as soon as you set the drifter – is what I find slightly annoying.

Gary,
Do you use a luff line furler attached to your bowsprit traveler to avoid the trip out to the end of the sprit?

Ben: The Flicka had a platform bowsprit and stuck out about 3 1/2 ft. When we purchased IDUNA, climbing out on the bowsprit was not an option. We upgraded the old furling gearing by purchasing a modern unit for safety reasons.

Yeah, I think im getting old!

Ben: I met two different guys who sailed BCC’s before reliable furling systems were developed. Both stated when they crawled out on the bowsprit, they got wet and sometimes held on for dear life as they were completely awash. We love hank-on sails and went to some expense adding zippered slab reefing to the jib - Pardey style. We added the furling system on our BCC initially for safety. This was our first furling system. It took about one trip to realize the advantages of the system. If the Pardey’s were more open minded about furling systems and engines, their boat would have both but these systems did not fit their “go simply, go small” marketing model. When they rounded Cape Stiff, Larry added a track to the top of the bowsprit. The intent was to attach the jib foot to a track slide and pull the jib out to the end of the bowsprit. The jib had a built-in stay. If this would have worked, we would have read more about it and how it is a better system than a furling system. My guess, it did not work on their rounding of Cape Horn (a.k.a. Cape Stiff).

Hi Gary,
In one of your photos you seem to be holding a small electric device to strip the varnish. What kind of gadget is it?
I use heat gun. But it is very difficult and messy. 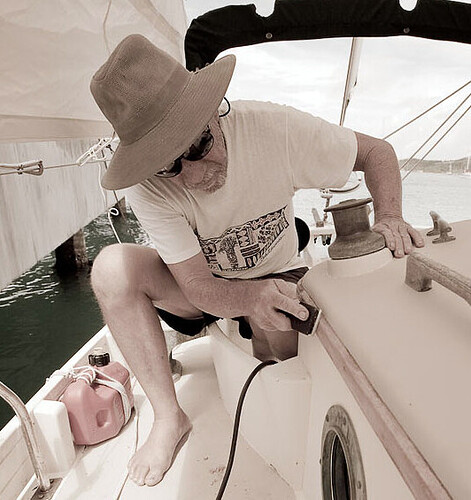 Mehmet,
It’s a standard scraper. Looks like something electrical because of the heat gun cord in the photo.

I use a heat gun too. I think it’s the lesser of two evils.

Thanks to everyone…
As usual I am both impressed and overwhelmed…

I’m on the road … Shooting photos!