On every boat that I’ve ever owned and taken off shore I’ve always thought it prudent to install an inflatable life raft. Looking through the gallery and reading posts on the forum I can’t find pictures of, or mention of anyone installing one.

I’m curious if any have installed one that I can’t see ( And if so…where ? ) and just what the general consensus is about them here among you fine folks ? 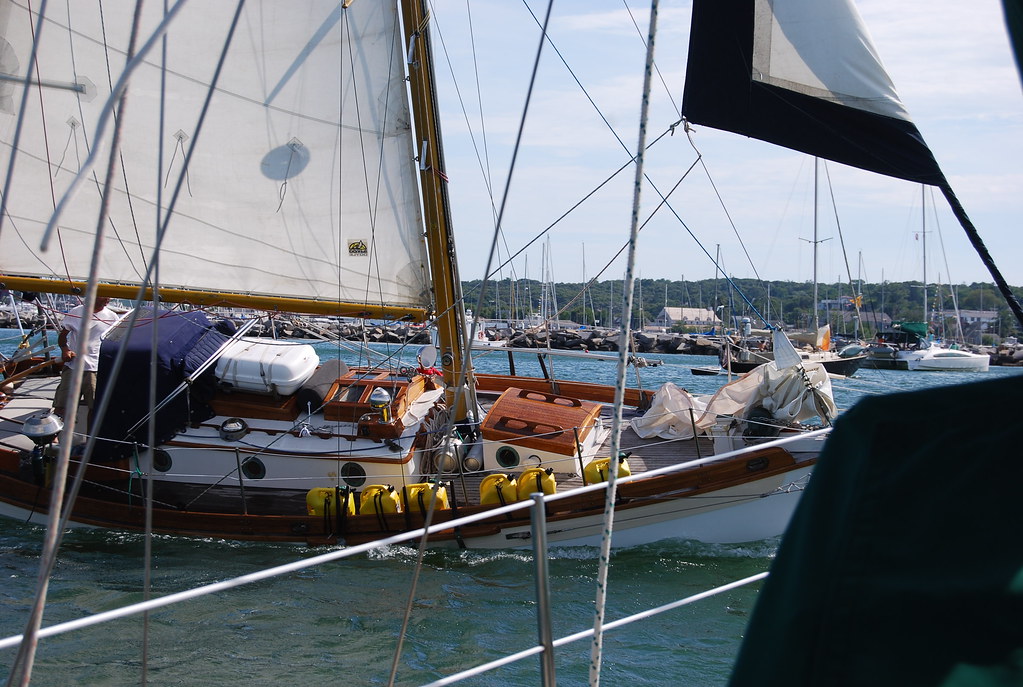 Ain’t no rule that life rafts have to life in a hard white case on deck, is there?

At times Zygote’s life-raft has been stowed in a cockpit locker. Currently it’s stowed in the cockpit. It weighs 25 kg / 56 lbs, so it’s a bit heavier than a bag you might check in an airline flight. Not that hard to lift on deck when you’re motivated.

And we’ve never used that life-raft. Cost me around $1K to service every few years.

What do you estimate the life span of your Winslow Superlight will be if its never used or abused and its inspected/serviced regularly?

The lifespan of any inflatable object is limited.

The Winslow Superlight uses a lighter/thinner fabric than, say, a Hypalon inflatable dinghy.

But that lightness means our Winslow has never been stored on deck and so has missed out on the heat that comes from sitting in the sun. Swings and roundabouts.

Zygote’s liferaft had a successful 10 year service a year or two back (I think an inflation fitting, connecting the CO2 cylinder to the raft, was replaced). We’ve been on a 5-year service schedule.

In about 3 years, I’ll be sending the raft for its 3rd service. And I am prepared for that service (ie 15 years) or the following one (20 years) to be the final service.

No problem, for two reasons:

Hey Gary here with hull # 123. I’m working on installing stainless steel life rails between my boom gallows and stern pulpit that I just had made from stainless steel also. I’m going to mount my 6 man Givens in a fiberglass canister in a custom stainless steel bracket . ISAF states that you must be able to deploy your raft within 15 seconds. Though I’m not sailing in any rallys or races I think it prudent to be prepared at that level.

i have a winslow offshore manufactured in 2000. it’s vacuum packed which reduces the need for servicing to every 3 years. winslow says i can expect roughly 20 years of service. I’ll like to change it out for a portland pudgy, but i haven’t been able to satisfy myself that i can sucessfully stow it’s 7’8" LOA. For offshore work i’d like to stow it upright ready to deploy from the cabin top, but it would extend over the companionway. if only it were 6’8"…

Just out of interest Bil, where exactly on the mast is the mark which indicates that its time to go swimming!!!

Are you single handing in the Bahama’s this year??

That’s easy. You have to make the mark yourself - the mast doesn’t come with such a mark.

I did the calculations 6 years ago. And the results of the calculation are mentioned in the stability information book I wrote for Zygote (see p. 9 of Zsib.pdf, if you have a copy).

The deal is that:

(a) the lightship, minimum operating condition, or arrival displacement, which he defined as 13,607 lbs (6.169 tonnes); and

The lower surface of the volume of air (if it were trapped inside the cabin) necessary to float the BCC in departure condition occurs (according to my calculations) occurs at an F sub m of 0.33 m. (I’ve probably got the spreadsheet that did the work, but finding it would likely take longer I’ve spent typing this)

If you accept my calculation that the air trapped inside the cabin will not float the boat if Freeboard is less than 0.33 m, you just do the sum 0.64 - 0.33 = 0.31 m and measure 310 mm above your first reference mark. And daub red paint there in the groove track.

Then you get used to seeing the red mark. You get a feeling for about what proportion of the cabin + forepeak + engine room volume is above the plane represented by the red mark.

That would allow you, given that the boat when sinking it likely will trim bow down, stern down, or listed to one side, to judge that same safety margin of just how much water can be tolerated inside the boat.

As you can imagine, I’ve not put my calculation of minimum Freeboard to test. But neither have I tested that the point of vanishing stability is at 133 degrees heel.

But I get a bit of fun, when we have land lubbers on board, pointing out once they are comfortable sitting on the settee when we’re still in the marina berth, that their feet and lower legs are below the waterline. And that the red mark is the marker of when it’s time to start counting 8 minutes (because that’s how long, based on experience in a relatively calm swimming pool, it takes to inflate the life raft and scramble on board when clothed. It’s not easy. I figure it would take longer in genuine ocean abandon ship conditions).

I head south 26th Feb with 32 buddies to sail to Georgetown in the exumas, they leave and the first mate joins me there to clean up. Then we sail north thro the marine park when I pick 1 daughter and a boyfriend for two weeks and then sail back single handed arriving Florida early may. Got a couple of guy sniffing at the prospect of sailing back but no definate bites yet. It sounds like a good cruise and really looking forward to it.

Shaula carries it’s valise 4 man raft in the lazarette. It’s not ideal, but we’ve lived with it since 1985. The Avon lasted about 20 yrs before they told me don’t bring it back again for servicing). On our sized boat, I don’t think there’s a really good solution. Lots of rafts have been lost from decks. Alice would have difficulty pulling our raft out of the lazarette. I rigged a line to the raft handles that I lead up to a block on the boom gallows, down to another block and then to the jib sheet winch. It helps a lot when I need to get to stuff that’s stowed in the lazarette under or outboard of the raft.
Dan Shaula