On our recent trip from the US to Grenada we encountered 30 knot winds 150 miles east of the Bahamas. We had wisely/unwisely thought that we could ride a front as it rotated from the west all the way round to the east. It worked beautifully and we made great easting. However when one rides a front you are asked to walk the talk! We had to face the music with high wind and interesting seas.

Stravaigin lapped them up and I was well pleased with how the boat and crew performed. Trips like this always teaches us a few lessons, and will inevitably expose a few areas of concern. One such was the sliding hatch for the companionway.

Up to this point I had some comfort that it was water tight and would not be a problem. Alas this was not the case. With water spilling over the deck there was a slot at the front of the hatch where it could and did find its way in. We do not have a turtle!! Anyway a turtle will be fabricated shortly and the hatch will slide into a safe spot where water ingress will be less of a problem.

Anyway I was provoked into looking at sealability of hatches and also how best to secure them. The hatch is a bit stiff to close and open, depending on when the first mate last greased the runners. I do read that a hatch that will not seal can be a major liability at the wrong time. One question is does the hatch have to be perfectly water tight?

I have scoured the marine stores looking for a good locking mechanism which can be used inside and out to secure the hatch against the batter boards, and not found anything to my liking. In addition it would be nice to have the hatch set in a partially open position but secure in that position.

As usual can I throw this at the forum for its collective wisdom which always seems to have excellent advice. Thanks to all.

I think a turtle (aka seahood) is a must for green water, spray, and driving rain.

I think a traditional sliding hatch is close to impossible to make waterproof. If tested with a firehose, some water is sure to get inside. The easiest and least expensive way to attain watertightness is a elastomeric/rubber seal that is compressed. That means redesigning the hatch; there are ways of creating compression with a sliding hatch but not with a flat slide.

Question is whether watertightness is really needed.

Have you seen the capsize test done by the UK magazine Yachting Monthly?

The boat they used had a front hatch that was waterproof because the dogs forced the hatch down to compress a rubber seal. I think that boat had a single large dropboard and a sliding hatch at the companionway. That’s kept closed for the test. And you don’t see much water entering there - the water enters from vents. See for yourself at: https://www.youtube.com/watch?v=Gqe1Sxa2GXo

After watching that, you might conclude that latching the chart table/reefer top, and securing the stove, the table, and the cabin sole access plates etc have higher priority than waterproofing the hatch. Not to mention needing to replace the vents on the Dorade boxes with deck plates.

On Z, we put in a dropboard at each reef and end with the hatch closed at the third reef/trysail. Z does not have a means of locking the hatch from inside - we decided against that. I’ve never contemplated a means of locking the hatch partway: just tasting the idea now makes me think that it’s an unneeded complication. If there were some emergency that needed immediate closure, having to unlatch it partway before closing doesn’t feel right.

Tom Unruh & Jill White on Galatea had a way of locking the hatch closed from inside. I’ve forgotten the details.

Just for the fun of it, here’re Tom & Jill on Galatea coasting South Africa in the Agulhas current back in 2008: https://www.youtube.com/watch?v=5ZL1bGtBLys

Stewart,
Don’t know if this meets your needs (only secured from the inside), but it was installed on Elizabeth at the request of the Admiral to thwart potential pirates here on the Chesapeake. I think it was a Perko from the local West Marine. 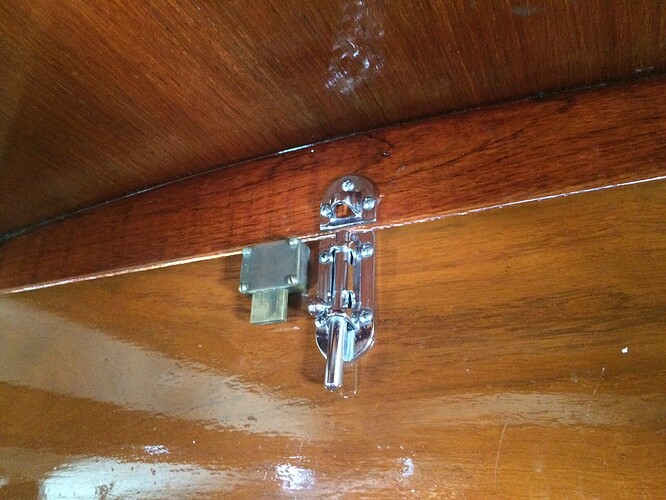 Thanks les neat and simple I like it. There are lots of complications for locks someone asleep inside and u want in. But for sure if the hatch cant be secured it might be a big problem in heavy weather. It is good to be able to lock inside to keep the Pirates out. Thanks

Ahoy Stewart , I use the same Teak stick for propping up the Ice box lid and also use it to jamb the companionway sliding hatch closed , and yes I found need to jamb the hatch closed from time to time while in port .

I have been considering using a sliding bolt like Les has , except I would mount it horizontal on the thwartship hatch beam and drill a hole in the raised slider coaming to use as a socket for the bolt .

I have scoured the marine stores looking for a
good locking mechanism which can be used inside
and out to secure the hatch against the batter
boards, and not found anything to my liking. In
addition it would be nice to have the hatch set in
a partially open position but secure in that
position.

I’ve made a latch for the companionway hatch that can be opened from both inside and outside. Small take-apart hinges have a spring-loaded pin on one of the halves. That is screwed to the hatch’s aft cross piece, out-board so that the pin can go into a hole in the FG molding of the hatch surround. A small turning block mounted beside and inboard of the pin piece allows a small cord to pull the pin inboard (unlock). The unlock line goes through the turning block and out through a very small diameter hole in the hatch. I attached a small bit a leather to the end of the line to grab hold of. I used a bit of metal half circle to keep the pin pulled inboard for normal hatch use. A piece of wood could also be used for this.

I’ve never actually needed to use this latch. I’m cruising in BC and not on the internet or I would include some photos. Can do in Sep when we get back to Seattle.
Dan Shaula

Photo of my inside latch for the companionway. The hatch is locked. The line is pulled to unlock (from the outside). To keep it unlocked, (from the inside) the pin is pulled inboard and the keeper is inserted. The keeper is hanging from a short line. 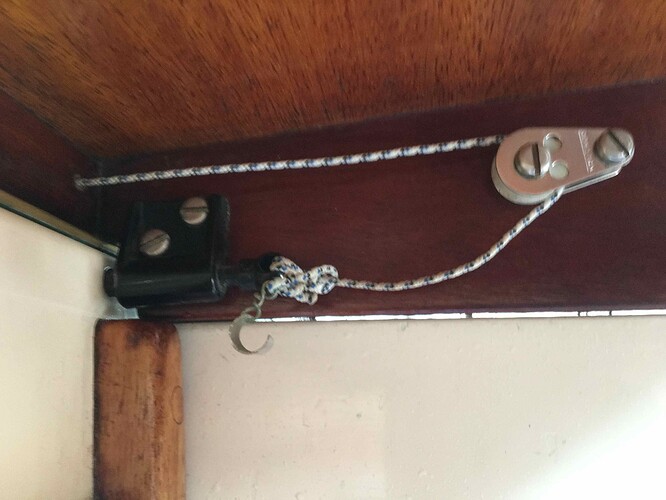