I’m the new owner of BCC no. 23, “Gertrud,” which, you may remember belonged to Jon Feldman when he died suddenly and much too soon in Baja in 2007. We have moved “Gertrud” to Fulford Harbour here on Salt Spring Island, British Columbia.

I have a question about mainsails which I’d very much appreciate advice on. The boat needs a new main and my plan was to buy another hollow leech, no-batten mainsail to replace the existing sail. However, a couple of sailmakers who have quoted me have argued strongly for a full-battened main instead, on the grounds that it will last longer and be more efficient. They brush aside my concerns about increased weather helm as the result of 20 percent or so more sail area, saying that the sail’s greater efficiency will compensate for that, and that the increased sail area can only be a good thing.

My strong instinct is to stick with the hollow leech, for ease of handling offshore, and to minimize weather helm on this older boat. What do you think?

My thanks for any advice and comments, Derek Lundy

That’s Derek Lundy, as in:
The Way of a Ship: A Square-Rigger Voyage in the Last Days of Sail (Knopf, 2002).
Godforsaken Sea: Racing the World’s Most Dangerous Water (Knopf, 1998).

Nice to see another BCC in BC waters! My sailmaker recommends against a fully battened sail but he does recommend a roach and regular battens. That’s Rick MCBride from Leitch & McBride Sails in Sidney, BC (lmsails@telus.net).

Nice to have ya on board Derek, enjoyed the books!

Hello Derek,
Just across the straits in the Port Townsend are PT Sails (Carol Hasse) and down the bay, Northwest Sails, both with good well deserved reputations for traditional and modern rigs. You may want to give them a call for another opinion.

Hello Derek and welcome to the fraternity of BC addicts. I have had both the original battenless main…some call the Dutch cut as well as the regular full cut main with standard battens.

I found the BCC supplied battenless main would strecth in the draft while the leech did not , resulting in a overly full almost baggy main with a tight leech.

Good luck with whatever selection you make.

Many thanks for your kind words on books, and thoughts on mainsails. Since my first post, I’ve also talked to two more sailmakers who further support the proposition that it’s a tradeoff between partial battens, full battens, or none. Pluses and minuses for each. I’ll keep pondering.

all the best, Derek

Hi Derek,
Maybe your cruising plans should influence the design of your main? Our sailmaker (Schatthauer in Seattle) recommended a battenless main for Shaula, headed across the Pacific. We’ve been very happy with it (it has lasted for 16 yrs and about 30,000 miles), and the extra sail area hasn’t been missed. On passages, it seems that reefing and unreefing is a frequent job, and it’s great to not have to worry about battens getting hooked under (or chaffing on) the shrouds. It seems that the main’s first repairs are usually to the batten pockets.

On the other hand, if you plan to do mostly coastal cruising in areas with lighter winds, maybe more sail area would be useful sometimes, although you will probably have to reef a bit sooner. With the BCC’s big,low aspect-ratio main, weather helm developes quickly as the wind builds beyond about 15k apparent.

Now that we are back in the Pacific NW, Shaula could use a main with lighter weight cloth, but I think I would choose battenless again. Are you cruising BC waters this coming summer? It would be great to meet up somewhere.
Regards, Dan

On Galatea, we recently replaced our mainsail after 20,000 plus miles with another full batten sail, this time from North in Cape Town. We like the full battens, modest roach approach (just enough to clear the back stay), for several reasons.

A couple of other things to think about:
If you can swing it, try the tides marine strong sail slide system. This has made reefing manageable and reassuring for us, even downwind, and even in heavy air. The sail comes down easily and reliably when you need it to.
Second, if you haven’t already, try out the reefing systems and use this opportunity to work with the sailmaker to tweak them. The BCC’s long boom is great for light air, but we have found Galatea sails just as fast and more comfortably with a reef once the wind goes much above 16 knots or so. If you’re passagemaking, Dan’s right, there can be a lot of reefing, but the upside is that it’s not difficult, and you’ll likely be able to sail your BCC to her potential much more often than your friends on their 40+ footers!

Speaking of reefs, I don’t think I have shared this with the board. A friend captured some video of Galatea sailing south in the Agulhas last year. 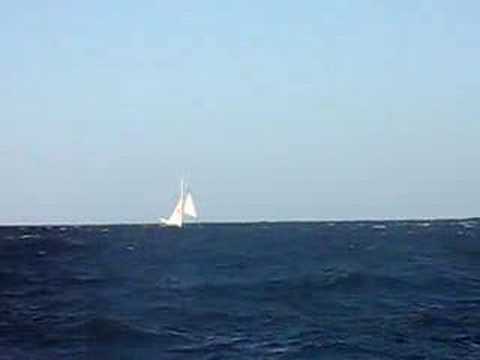 Oh, that video is fantastic Tom, thanks for sharing…puts me in the mood.

Thanks Dan and Tom, you make good cases for each kind of sail. I’ll be cruising locally for a while but almost certainly going out into the Pacific at some point. Tom, I have looked at the Tides Marine slide system, and sailmakers have recommended it as a very useful adjunct to full battens mainsail handling in heavier air. Of course, cost becomes a greater factor.

Dan, if you’re in the area of the Gulf Islands, do get in touch. It would be good to see another BCC up close - haven’t had a chance to look at that many of them.

Really appreciate all your comments.

all the best, Derek

Derek, glad Gertrud worked out for you! Funny, I was planning to go look at her, after I took a boat down to St. Martin for delivery that fall. When I got back, I called and she had sold! I always wondered who bought her. Glad your to know she went to good capable hands, and that your no stranger to the forums.