Hi all,
Just a heads up for BCC’s that are near their 20th buildday. Shanti’s rig is 21 years old. I have been working on re-rigging her as described in the post “my dream rigging”.
I knew the turnbuckles were in bad shape just by the amount of rust they were showing. One turnbuckle has broken now. But it should be noted regarding it’s location. It was the starboard boomkin TB. This is where the exhaust hits it with warm salt water spray.
So if you rig is aging and you have the TB’s that use stainless steal turnbuckles, keep a closer eye on this one. If you have bronze TB’s … no problem. Photo attached.

Have started installing new synthetic rig. Got the whisker stays on yesterday as a test for measurement. I will have more on my blog. 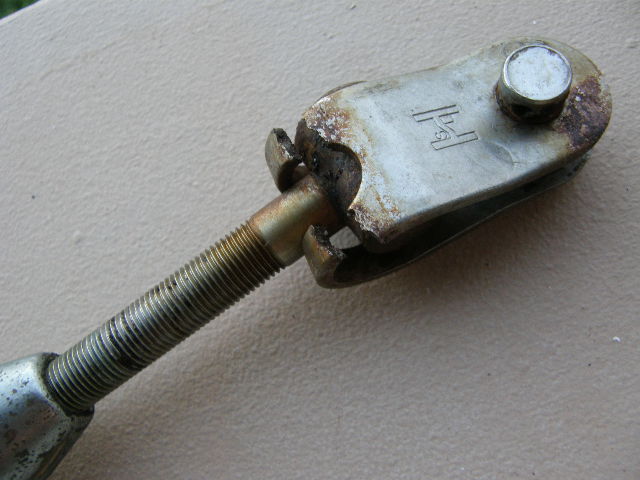 Nasty !
Thanks for the heads up regading the exhaust Gary. Adventure’s 22 years old, but the turnbuckles look pretty good so far. Maybe a good idea to check for cracks with a coloured penetrant.

Yesterday Adventure made her first outing under sail in the Arabian Gulf !
I’m hoping someone took some pictures of her - I’ll post under new thread if I can get any.
All the best,
Mike.

Nasty !
Thanks for the heads up regarding the exhaust Gary. Adventure’s 22 years old, but the turnbuckles look pretty good so far. Maybe a good idea to check for cracks with a coloured penetrant.

Yesterday Adventure made her first outing under sail in the Arabian Gulf !
I’m hoping someone took some pictures of her - I’ll post under new thread if I can get any.
All the best,
Mike.

Also look for rusting that seems more than usual. When the SS starts rusting on the inside it bleeds to the surface.

Hi Gary,
In the afternoons at around 1.00 the onshore wind starts to pick up - this week it’s about 12 kts predominantly out of the North to North West.
Now the season’s starting for us although I’ve been sailing my old boat all summer till Adventure came over from California.

Last December I was out in a force 10 on my old J22 - an interesting afternoon but I wouldn’t have missed it for anything. A couple of boats lost their masts that day.

We were Ok apart from the mainsheet block on the traveller parting and everything ending up on the end of the boom like a bunch of coconuts, giving me a 1:1 purchase on the main, in one hand, and the tiller in the other with the boat broaching every few minutes!

The wind is usually on the light side, but we get our share of 20kt + days.
Conditions are more testing out of the gulf on the Indian Ocean coast
All the best,
Mike.

Hi Gary , T Y , for bringing this ss failure to our attention.

I have never liked the “T”-bolt toggle design.

When I purchased my 9 year old , used boat in Honolulu, the stainless structural rigging was polished and looking good, so it passed survey with the recomendation that all ss structural fittings that spent their life in tropical salt water areas, should be replaced every ten years.

The first leg of my voyage to get her back home to San Francisco, was Honolulu to Seattle, in July, just as hurricane season was arriving. I was concerned, because this was my first solo long distance open ocean passage .

I had the mast pulled for re-painting, before my departure, and by accident, I found spider-web like cracks eminating from around the clevis pin holes on three of the mid-ship ss chainplates, Ouch !

The surveyor report hedged by saying that he couldn’t survey, what he could not see.

The spider-web cracks were covered up, by those ss bent plate “T” toggles .

My reasearch later showed that ss structural fittings needed to “shed” salt water, not entrap it, and go stagnant, or that chloride ion found in stagnant salt water, would start crevice corrosion .

Those bent plate “T” toggles were entrapping and holding the salt water right against the chainplates around the clevis pin holes, where you can not inspect, unless you remove them.

You are sooo correct that rust is evidence of corrosive activity in ss, and it needs to be stopped early or replaced.

I am glad that you are “Heads-Up” on this issue, and sharing your info with us, here on this forum .

Thanks for this pic Gary. Reminds me of Elizabeth’s rig when I got her. Heat and salt are naughty.