Now that Calypso is in the water (headed for our second weekend cruise in 3 weeks this weekend), we are thinking of all the wonderful ways we can use her . . . there is a fun-sounding regatta coming up (Turkey Shoot) but requires a PHRF rating - anyone out there have a general idea what the BCC might come up as?

I am pretty sure we need to submit all kinds of measurements to get a true rating, but I’d like to have a general idea of what we might be up to. I thought we had touched on this topic a while ago, but I can’t find it (perhaps my search parameters are suspect!)

Thanks for any help here,

Nica and Jeremy,
I think there was some discussion of BCC PHRF ratings in the old forum so I agree that a search there might be helpful. I don’t have the source at hand but I once did a Google search which turned up a PHRF listing for several score popular designs, and I think it gave 228 for the BCC. Given a decent breeze, good sails, a clean bottom and a reasonably long course I would be very happy wth 228. Mark Geigel raced Itchen on the Hudson, so he might have some info. I recall him saying that given the right conditions he won a lot of races. PHRF ratings are a mix of fact and fudge factors and can be tailored to local conditions, so the same design of boat can be rated slightly differently by regional race authorities. Where and when is the "Turkey Shoot?

A search in this forum carries many messages about PHRF, but the only one that is speific was in California in 2002, PHRF = 204

Turkey Shoot is a “classic yacht” regatta based out of Yankee Point
Sailboat Marina (Corrotoman River) in late September. I saw a flyer
about it at the Deltaville West Marine - we haven’t talked about it much
but it sure sounds like fun - and we qualify (design more than 25 years
old.) Want to make it a BCC event? Should be a day (okay, a LOOONG
day) from the Pax River . . . Might be the impetus we need to get there!

I did some more digging in the archives and there is quite bit there - Ratings mentioned ranged from 204 to 230, depending on the wisdom or whim of the regional rating committee plus adjustments for type of prop and size of genoa The skill and success of the skipper after a season or two of racing results against other local classes can result in a lower rating. Here’s typical post from the past:
xxxxxxxxxxxxxxxxxxxxxxxxxxxxxxxxxxxxxxxxxxxxxxxxxxxxxxxxx
Quoting Mark Geigel,
"Re: IRC Rating
Posted by: Mark Gearhart (IP Logged)
Date: January 17, 2005 04:02PM

The BCC sails quite well against other boats under the PHRF.The rating depends on your area for sailing but in the Long Island area the rating is around 228 depending on your sails, prop etc.

I think if the BCC was sailed competitively on a regular basis the rating would be lowered as it does sail better than the assigned rating. We have an informal annual race on the Hudson River each Labor Day called the Kizer’s Cup Race. I did very well several times against a broad mix of boats , Bristol 40, Nonsuch 26, Tartan 34, Benneteu 42, Catalina 30.I won twice on corrected time. This irked many other members and they did change my rating to a 215. They were not happy to be bested by an"old fishing smack" with a bowsprit.

I am the owner of an Annapolis based Falmouth Cutter and have been unsuccessful in my previous efforts in finding a FC PHRF rating. It would undoubtedly be higher than the PHRF for the BCC, although in some situations a FC will outsail an BCC (that latter statement should provoke some discussion). Efforts to get a PHRF rating for my FC in local Annapolis racing circles have also been unsuccessful. I too would greatly enjoy winning against other much larger boats.

Last Photo on the page shows two “winch-grinder” on Nica and Jeremy’s boat during the Turkey Shoot race.

Anyone with a table of target speeds? Anyone calculated a polar diagram?

Now that we intend to keep Zygote based in one marina, rather than voyaging, we’re thinking of reducing weight a little (hard when we live aboard) and trying some sailing for performance.

Are you planning to do the Turkey Shoot Race this year??

I participated last year and had a great time. I think this year it is the second week in October. I plan to enter again. Have not heard from Jeremy and Nica. They did well last year from what I recall. It’s a bit down the bay from you but it would be great to have a number of BCC’s in the race.
Best
Mark
SV “Lightfoot”

Our plan is to sail the Turkey Shoot this year. I will sail the boat down to Deltaville and Lenora will drive down with perhaps two winch grinders. Looking forward to seeing you again.

I found it nigh on impossible to gather accurate sailing data to create a genuine polar for Zygote. Regardless of my best intentions, Zygote remains in live aboard mode, so she’s overloaded. With the best instruments, I found it jolly hard to collect sailing data that has accurate TWA and TWS and compensates for tidal currents etc.

So I made a ‘fake’ polar which is close but not perfect. See Polardc.jpg - the yellow curve is the 10 knot TWS line. The grey lines are the VMG for Upwind and Downwind. I reckon the U line is too hard on the wind - I prefer to let Z run freer than that (but Z’s masthead transducers and wind instrument are only Raymarine S60, not Ockam instruments, so my idea of TWA and TWS are just approximations).

I’ve been playing feeding that polar into one of the new generation of routeing software (QtVLM), which does this (zygoterouteing.jpg) for one of Z’s usual runs, to a favourite anchorage (the Sandhills) on Moreton Island, one of the large sand islands on the East coast of Australia. The broader yellow line is an optimised upwind route to the Sandhills. The routeing takes into account not just the wind barbs shown, but the predicted windshifts over the predicted time of the whole route. The coloured (purple, blue, green etc) curves are isochrones, showing the possible locations Z could be at 30 minute intervals.

I think that routeing is, like the polar, too hard on the wind. I think my actual practice is further off the wind (but these waters are tidal, so I time departure for arrival time, for tide [and related chop due to wind against tide] and so on. 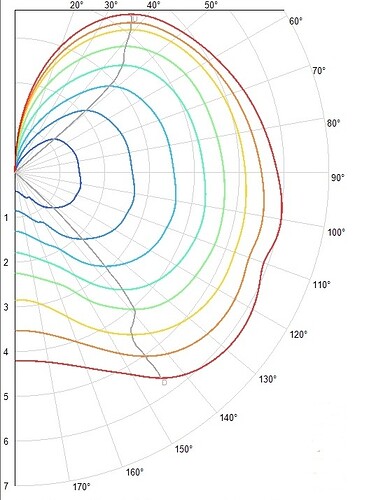 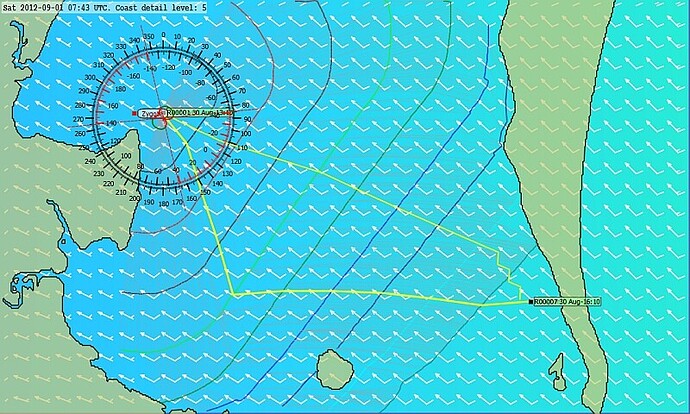 The FC is rated at 252 which means you will win every race.

Hi Bil,
on a message last year you mentioned you defined a BCC polar diagram to calculate weather routing with the QtVLM program. At that time you shared two pictures about it. Can you share the .csv file too?

I’m quite reluctant to post a *.csv of my ‘fake’ BCC polar.

That’s not just because I want to avoid Barry Obama and his minions who read all our posts and e-mail.

More serious than that, I don’t want to besmirch the reputation of Lyle C. Hess and the BCC. Once a polar is loose on the Net, I fear someone could (mis)represent it as the genuine polar of a BCC.

Don’t get me wrong. I find QtVLM and my fake polar quite useful. It changed my thinking about our usual sailing routes.

I used to look at gribs, the wind, and the tide to try to guess the likely wind shift, then work out which side of the route to favour, especially if working to starboard early would put the tide on Z’s lee bow when working upwind, for example.

QtVLM favours more tacking on shorter legs in the middle of the tacking cone. And does a neat job stepping through the wind shifts, as predicted in the grib.

Did I mention that Moreton Bay is tidal? If you’ve time on your hands, point your browser to http://www.marine.csiro.au/~and371/seq/anim_mb2_plan.gif. That’s a quasi real-time animated gif. If you look at my graphic from the earlier post in this thread, you’ll see Z’s usual route from Reef Point to The Sandhills. Just so happens that staying in the middle of the tacking cone also puts Z through the minimum tide zone.

To get back to why and how I made a fake polar:

My efforts to get good data were not satisfactory. I plan to change the anemometer and wind vane of the mast head wind instrument next month. Might help. And, after next haul out, try again with a clean bottom, this time using OpenCPN to collect the data (and an OpenCPN plugin that should generate a polar directly from that data!).

One of my problems with my earlier hand-collected data was that my sailing is asymmetric. Either Z’s hull is more asymmetric than I think, the deck gear is asymmetric, or my sail trim is asymmetric. Whatever, Z usually performs much better upwind on starboard than port.

Note that Z is always in live aboard mode. And not infrequently has a minor list to starboard because of gear and equipment stowage. That by itself may be enough to generate that asymmetry in upwind performance.

I could add that a knight’s chess move away from Z at the marina (if you get my drift) is Bob on a Benetau. Bob is v competitive and every Saturday he takes on a couple of grinding gorillas and goes around the buoys. Even in full live-aboard mode (Bob even carries a washing machine on board!), Bob regularly beats the keen racers who are in lightship condition.

So my complaints about Z’s weight and stowage condition might be nothing. And the real problem might be my inadequacy in sail trim and helming.

Bil (who spent a hour today teasing apart some of the complexity of the verb ‘set’ for the latest version of Zwords: as in “set the anchor”, “set sail”, and “set of the tide” or “set by the tide”. And the noun ‘set’ in “generator set”. It should be available for download at the usual URL)

OK Bil, I understand your concern.

I’m going to do as you suggest. Thanks.
Another path I’m going to explore is to use some Velocity Prediction Program (VPP) to generate a theoretical polar diagram from the boat measurements and then adjust the results from logged data.

(this is because my boat is still on the dry, if not I just will sail around and forget the all thing :-))

I spent several hours with PCSAILstudnt.xls, a VPP program created at the U of Michigan.

I’ve sent you a PM to discuss some of this off-forum.