I have seen posts on the forum with retrofitted bushings in the rudder gudgeons. I have received a new set of pintles and gudgeons for Merry and would like to install bushings to prevent any future issues, rather than trying to bore out concentric holes after the wear has happened. The aim is to do it right once and allow the bearings to wear and replace when needed of trying to fix damaged pintles and gudgeons. Does anyone have an opinion on this strategy? Is it smarter to install without bearings and fix when it is a problem later?

I am considering these readily available flanged bearings: http://www.mcmaster.com/#57785k37/=ydljat
They are UHMW polyethylene, 1/8" thick, and have a 1.5" diameter flange.

Does anyone have an opinion on whether that flange width is large enough?
Any experience with UHMW for this application?

Thanks for the opinions!

I use the same bushings 5 years no trouble or slop. They are working just fine.

Get bushings for your new gudgeons! If you wait until there’s wear, boring them out to be concentric with the holes when new is difficult. This results in some alignment hassle. I had to make a shim to get everything to line up. The pins in the pintles can be pressed out and replaced when worn, but if you use bushings you avoid that problem. With bushings, the gudgeons and pintles should last forever.

1.5" flange sounds OK, I can’t remember what I had made up by the machine shop.

Get bushings for your new gudgeons! If you wait
until there’s wear, boring them out to be
concentric with the holes when new is difficult.
This results in some alignment hassle.

That is my thought exactly, but wanted to double check - a proper bushing should save the bronze, but a crappy reaming job will ruin it, i’m afraid…

Alternatively, i have found thin 1 1/8" OD bushings but they are made reinforced PTFE, and doubling the cost, though they seem to be rated for higher loads. see here: http://www.mcmaster.com/#standard-sleeve-bearings/=ygrwpa

How did you bore yours out to the larger size? I am also considering hiring a machine shop to do it with a lathe, instead.

In 1981, Sam didn’t put in bushings and I wasn’t smart enough to do it at the start. After about 5 (or was it 10??), if we were anchored and a bit of chop came at us from the side, there was a very annoying rudder clanking. I took the gudgeons and pintles to a marine machine shop. Sam told me that the foundry he used made them from naval bronze, so I ordered a foot of 1" naval bronze rod. They pressed the old pins out and pressed in new ones. They made the bushings and reamed out the gudgeons and pressed in the bushings. I don’t presently have access to my old logs where I described the bushing measurements, but I believe the bushing OD was 1.25", so 1/8" walls. I think the shoulder diameter was 1.5", but that could be a bit more I guess. We should be back in Seattle in about 10 days and I can look it up then. We’re presently cruising in B.C.

Because of the wear and difficulty of knowing exactly where the original center of the gudgeon hole was located, the machinist was probably a bit off. I had to make a shim (epoxy+filler) to get the top gudgeon to fit flush with the transom.

I think a bushing with an 1/8" wall is thick enough, but I’m not an engineer. Our bushings seem to have lasted about 20 yrs, and can be replaced fairly easily.

I definitely would have a good machine shop do this work. If I were you, I’d certainly consider having the machine shop make the bushings, and so get them made to your specifications, and also tap their expertise as to size.

Thanks for the great advice, Dan. I’ll be excited to hear more about the wall thickness and flange OD when you have time. Enjoy your trip!

We’re back in Seattle. I could find a note on June, 1993, mentioning that we hauled out and I installed the bushing in the lower gudgeon. The other 2 were done previously, in the water (although I think doing all three at a haul out is the way to go, if possible). Unfortunately, I don’t seem to have made a sketch of the bushing’s dimensions.

However, a few years ago, I got paranoid and had the same machine shop make up a spare bushing, just in case. I had to give them new dimensions. Here’s what I had them make up:

That helps quite a bit. I was considering a thinner 1/16" wall in order to reduce the amount of material removed from the gudgeon in order to avoid weakening it. Otherwise, my dimensions are very similar, with Shoulder OD of 2", shoulder thickness of 1/8" and height of 1 3/8"

Have you ever replaced yours? Any thoughts on the way they wear? If you were doing it again, would you keep 1/8" walls or use 1/16" walls?

Thank you. I will post my final plans and etc when I’m finished so that hopefully people can use in the future.

I haven’t replaced ours after 22 yrs–when I shake the rudder it all seems tight. I don’t think you need to worry about the bushings wearing out very soon. I would NOT use 1/16" wall thickness. Stick with 1/8". Again, I recommend you use a machine shop to ream out the gudgeons and fit the bushings (with a press). You don’t want the bushings to spin in the gudgeons.

Thanks for the advice, Dan. I’ll be going for 1 1/8" rather than 1 1/16", then. Also thanks for the reminder to make sure the bushings press in with a close enough fit to prevent any movement of the bushing inside the casting.

Last night I visited my machinist friend for help with this project.

After some fiddling, we used a Boring Bar in a large Grizzly Mill. I’d used an adjustable boring head many times before, but to work with a professional machinist at the shop made it go much smoother. Fixturing was very simple with a large v-block, though we found that the two pieces were not exactly the same depth, but varied by about 1/16"

We centered the holes using a piece of 1" delrin rod fixed in a 1" expanding collet. This ensured that our holes would be perfectly centered. Then we scribed the final cut by adjusting the boring bar slowly until it made the size circle we needed.

The key, though, was a technique I hadn’t used before. We adjusted the boring bar now to match the original 1" hole, then adjusted it outward only about 0.05" at a time. Then we made about 5 passes, each time adjusting it outward to slowly shave the hole out. This prevented the cutting edge from chattering and catching on the material as it removed it. Instead, it cut very smoothly and we were able to feet it quickly.

We bored out both of the transom mount gudgeons to 1.255" in preparation for the bearings 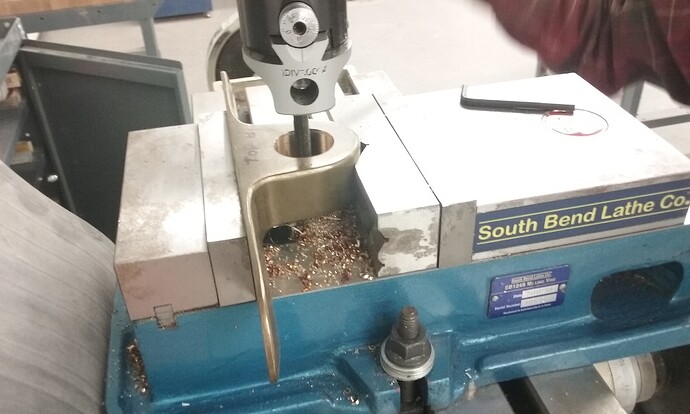 next, we’ll build a fixture for the angled heel fitting and bore that in the same manner, then cut bushings from PTFE delrin to fit.