Ok- So, maybe this is a stupid question, but what do you have to hold the forward scuttle open?

I have nothing but the reminder that something used to be there (see pic). I’m making a new scuttle hatch since the current one is pretty beat up and was hoping to install something to prop it open rather than unpin and remove it when we’d like some fresh air.

Thanks, as always, for the help! 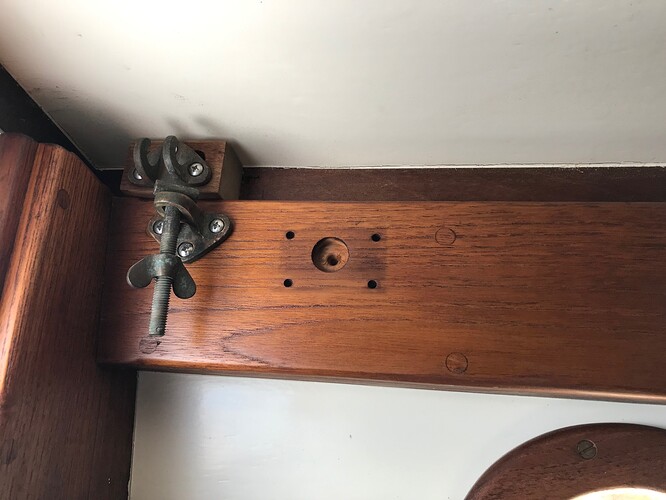 I’m going to be taking possession of a Falmouth Cutter in a week or so. While I was examining her, I happened to take a close-up of her hatch support. 1997 Sam Morse model. 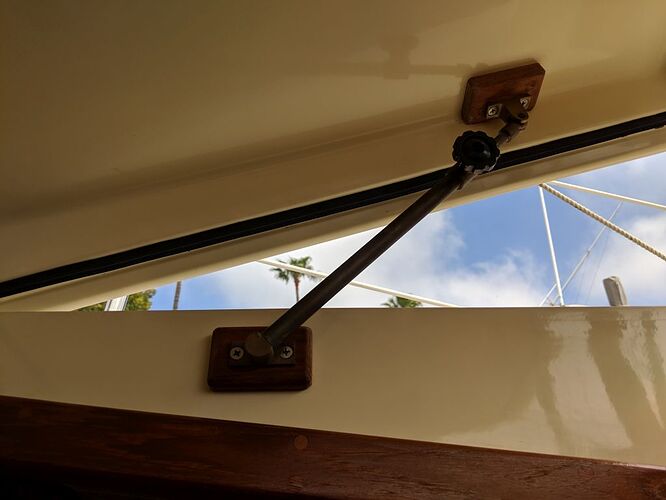 There would have been support rods on both sides that could be adjusted and tightened with a friction knob. I removed mine and just use a wood stick that holds it open. I like it much better as it is simple and foolproof. The rods were a bother to tighten or loosen both sides and since the hatch is pretty heavy it did require that the knobs were quite tight. Also on occasion the hatch got leaned on and would crash down with considerable force. So I like the stick better.

I usually have the scuttle open while anchored to allow air through like a wind catcher. A simple tether around the mast tied to the prongs of the hatch works. Well. The hatch is heavy and if it fell on the Fingers or head would likely make your eyes water! So care is necessary.

+1 for the stick or several sticks of different length

I have a couple of different sticks. Major improvement is to get a second set of hinges from Pt Townsend foundry so you can open the hatch the other way when anchored. Wow, what a difference!