A friend asked me to sketch the anchor snubber setup we use on IDUNA. I thought I would post it at the forum for new BCC owners. 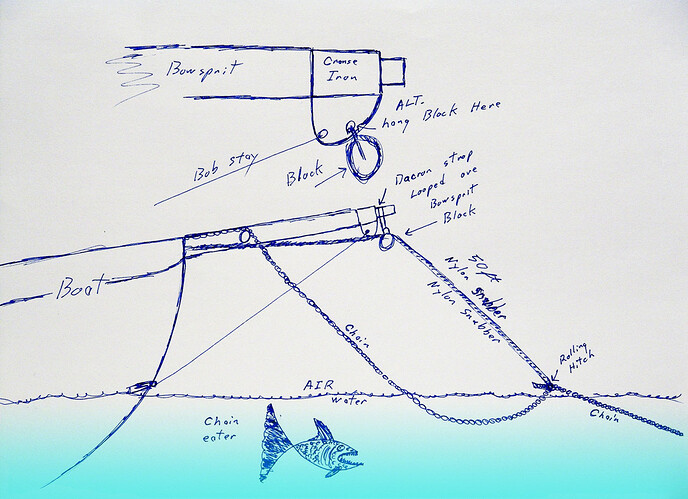 what kind of fish is that Rod?

The water gradient is outstanding!

Hey, so with this set up, when the anchor comes aboard, both ends of the snubber end up on deck right? Do you leave the block in place and the snubber run thru it while sailing?

I have a similar setup…got the idea from Roger…the port end of my snubber is basically permantley attached to my port samson post w/clove hitch as is the starboard end when not in use. I find just loosing the starboard end gives me enough length when attaching it to the chain. I also have large cleats outboard of my samson posts. I pull a bit of slack on the port side so I can cleat it rather than letting the samson post take the strain. Remember to leave a droop in the chain so it doesn’t go bar-tight when the wind pipes up…defeats the purpose of the snubber.

Once I pull the anchor aboard, the snubber stays hitched to both samson posts and through the block on my cranse iron. Less hassle to have it all in place next time I anchor.

So the block doesn’t bang around too much out there underway eh?

No block banging, out there, because the pennant still remains threaded thru block, which is drawn snug if needed, to the bits.

My greatest worry is when docked, some passer-by, might snatch my Southcoast snatch block !

Once you start using this snubber system, it is very easy.

At first I worried about the rolling hitch getting hung up on the anchor rode roller, but it doesn’t.

Likewise, when lowering,and after setting the anchor, I tie the rolling hitch on the rode, then let out the rode some more and let the rolling hitch roll out over the roller, and adjust the snubber tention, to provide the needed loope .

The fish in the sketch belongs to the catena acanthodians family. It is a rather rare nocturnal feeder that mostly feeds on old rusty chain and is thought to be responsible for anchor chains parting in the middle of a moonless storm tossed night.

I thought so but didn’t want to embarass myself by getting it wrong!

Thanks for the snubber info, I guess I gotta put it on the to do list…I also appreciate not being snubbed.

First, the sketch I drew is based on my conversation with Roger Olson while he was visiting friends in Baltimore, MD. I should have noted that earlier.

When we first started to use the snubber shown in the sketched, we setup the snubber block after we set the anchor. We also removed the block and its strop before we won the anchor. When I singlehand, I leave the snubber and its block in place at all times. I bring both ends of the snubber line, inboard and secure them to a stanchion. This move the block off to the side of the bowsprit and reduces the chance the block will bang against the bowsprit. This season, I plan to drill the lower tang of the cranse iron to accept a shackle. The snatch block will be attached to this shackle and left in place along with the snubber line.

In practice we attach the snubber after running our chain and setting the anchor. The snubber is attached to the chain with a taut-line hitch. A rolling hitch can also be used. Once the snubber is attached we play out more chain along with the snubber line. When the snubber touches the water, we secure the snubber to the bits and run more chain out between the chain roller and snubber. To secure the snubber line, we take two turns in a clockwise direction (starboard side chain roller) around the starboard bit then lead the line to the port bit and take two turns in a counterclockwise direction around the port bit. This pattern is repeated several times before we make a loop in the line and tuck it under the last top turn around the a bit. The friction of the line against the bits prevents the line from slipping. If we want to increase the length of the snubber, we unwrap the line until only two wraps are left on the starboard bit. Using the friction of the line around the bit to control the line, we play out more snubber line, as well as more chain. The extra chain between the boat and snubber usually sinks the chain such that the pull on the anchor is more horizontal. We have never dragged or sailed around our anchor with this arrangement.

We rode out a squall line packing an estimated 60 knots of wind. This is the only time I have every seen the boat swing 90 degrees to port then 90 degrees to starboard before straightening into the wind. She was on a snubber with 100 ft of 3/8" chain in the water. Water depth was 10-12 ft. It was not fun - see photo. 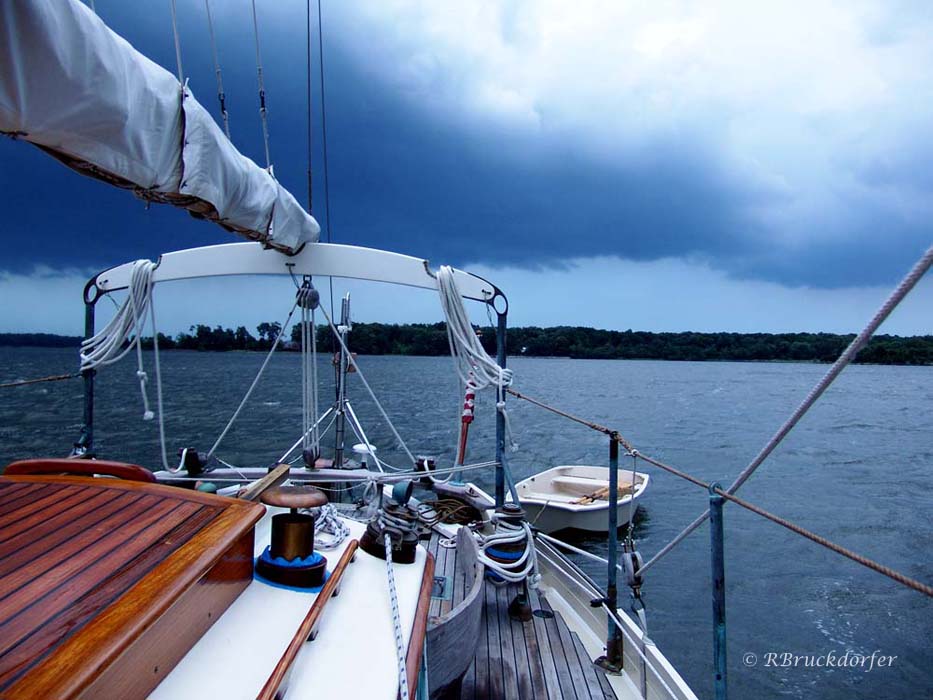