I seem to be dominating questions and I apologize. I’ve been doing a lot of work on my BCC 28 and have questions regarding various projects. I came across 10 used bronze stanchions that are to be mounted on the bulwarks. I had presumed that the wood posts that attach to the bulwarks were aligned vertical to the waterline so could be used as “guides” for the stanchion angles. However, it appears that they all are set at the same angle to the deck (sloped somewhat towards the stern) and so are not consistently 90 degrees from level. At present my boat is on jack stands and not quite level (using the cabin sole as a reference). Can anyone provide me with the correct angles for stanchions at various places on the boat?

As for your stanchion angle question: if yours is a standard build, this page (attached if I’ve done it correctly) from the BCC Construction Manual might (just might) help. Beside each stanchion number you’ll find an angle.

I’ve never measured the angles (and just work on the principle that every piece is labelled, numbered, and sometimes photographed first).

Otherwise I reckon you’ll be doing trial and error.

With luck, this URL will take you to the gold mine of the BCC Construction Manual:

Thanks as always, Bil! I do have that page but reading it is difficult. Presuming that the degrees are adjustments for 90 degrees from the deck, they don’t make sense. The deck and bulwarks sheer rises from amidships fore and aft. But the angles increase steadily from fore (0 degrees where the bow rises) to aft. Moreover, all of the wooden posts on my boat are at the same angle to deck.

The angles cited are perplexing - and that’s why I said the page ‘just might’ be of assistance.

The numbers refer to something, but what?

Sumio Oya and Roger Olson, both former presidents of Sam L Morse Co., are occasional participants in the Facebook site that talks about BCCs, One or other of them might be able to help.

Roger was responsible for the modern drawings in the Construction Manual - not a few of them bear his initials. I believe that page referring to the stanchions and giving angles and spacing predates Roger becoming president of SLM Co.

Sumio took over from Roger and had to work through almost every aspect of construction of a BCC.

A couple of BCC owners have in the past reworked their stanchions, including at least one whom I understand re-made their stanchions completely and, from what I remember of a conversation with him, spent considerable time and effort getting the stanchions to stand up parallel to each other.

spent considerable time and effort getting the stanchions to stand up parallel to each other.

Just over one year ago, I spent considerable time trying to take low distortion photos of Zygote for my guide to blocking a BCC on the hard.

When I look at those photos (i’m examining one of the port side) now, I am sure that:

I’ll see if I can measure the angles with accuracy (instead of just eyeballing).

I’ll see if I can measure the angles with accuracy (instead of just eyeballing).

I used one of the ‘on-line protractor’ websites: Online Protractor | Angle Measuring Tool

I uploaded one my ‘low distortion’, with Z just relaunched and floating in her marina pen with fairly neutral trim.

That on-line protractor is graduated in single degrees, so let’s assume we have plus or minus one degree of accuracy.

In the photo, the bases of two or three stanchions were obscured by fenders or whatever. I used every trick to get as accurate a reading as possible.

Stanchion 1 is at 90 degrees to the waterline, so 0 degrees deflection;

Stanchion 4 is at 90 degrees to the waterline;

I do not have a similar photo of starboard side (Z is currently berth starboard side to a finger; on the day I photographed her, the next berth to port was vacant, so I could stand on that finger in line with mid-ships. I could not do the same on starboard side).

let’s assume we have plus or minus one degree of accuracy.

Having been trained by experts, I repeated all measurements. The one degree accuracy is spot on. Second time around, Stanchion 3 leans aft by only 1.5 degree! 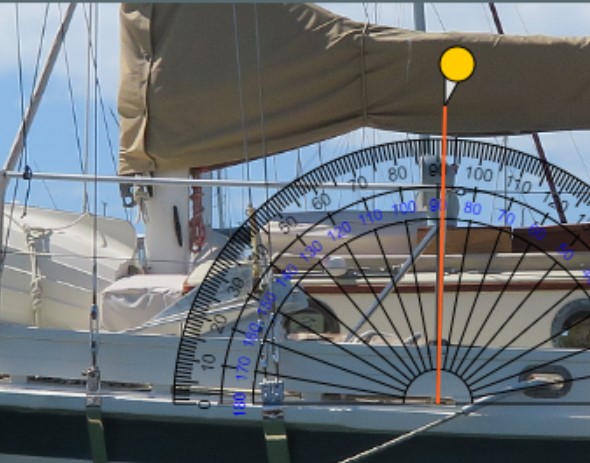 So returning the issue of the angles given on page 26 of the BCC Construction Manual.

The diagram on page 26 shows what seem to be:

(1) on port-side of the hull diagram, the locations of 8 wooden bases for metal stanchions, spaced 37 inches apart; and

(2) on starboard side of the hull diagram, the locations and angles of 14 wooden stanchions, spaced 20 inches apart, that support the bulwark timbers.

It’s important to distinguish between WOODEN BASES for metal stanchions (which many but not all BCCs have, because on some BCCs the metal stanchions have no wooden bases and instead are throughbolted directly through the deck) and WOODEN STANCHIONS that support the bulwarks.

Regardless of the mystery of the construction manual, I think I have a solution for setting stanchions at vertical to cabin sole for a boat that is not sitting level on the jack stands. I’ll use a digital level with the angle adjusted for the cabin sole deviation from level.

Regarding that mystery of the bulwark stanchion bevel angles: 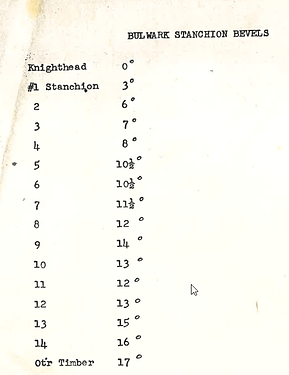 These are the athwartship bevel angles of the base of each bulwark stanchion with regard to the deck. The deck has pretty consistent athwartship camber (I think). So the fact that these bevel angles go from 0 to 17 degrees as you go from bow to stern reflects that the bulwark angles slightly outward (flare - away from the centerline) at the bow, and angles slightly inward (tumblehome - toward the centerline) at the transom - which follows the wineglass transom.

This note (at the base of the bulwark stanchion diagram below) explains where those angles apply: