I’m ready to add stanchions. I know most factory stanchions are deck mounted and attached to the bulwark too. I hate to drill more holes through the decks. What about the Pardey’s style where they are mounted just to the bulwarks? Any thoughts?

Lanny,
Terrier’s (#31) stanchions are bronze and mounted to the bulwarks. Very Solid. New ones can be gotten from Port Townsend Foundry. The support arm on either side for boarding has a base that was screwed into (not through) the deck with 2 #10x 1/2 bronze screws.

I prefer through bolting to the bulwark as well as the deck as this adds to overall structural strength, much more solid arrangement. We have found in all cases where simply screwing into the deck or bulwark had insufficient purchase long term to prevent leakage and subsequent core damage.

I’ve currently got my stanchions in storage. Coverboards are epoxied over and
painted so the deck holes are no longer there. I’m OK cruising without
stanchions just like in the old 19th century days. Makes varnishing a whole lot
easier also. If I put them back on, bulwark mounting sounds like a good idea, but
I’m wondering how I might adapt the stanchions that came with the boat. Has anyone modified them for bulwark mounting?

Alternately, I looked at the Port Townsend Foundary web site for their stanchions.
Lanny, may ask how much you paid for these stanchions?

Having been saved from going overboard by my lifelines, I would encourage you to install them. An unexpected wave,out of sequence, while pulling a second reef knocked me off my feet. Even with my harness attached, I would have been overboard…since then, I only work at the mast from the weather side.

Also, while we have very sturdy bulwarks, I’m not sure that an accelerating adult body wouldn’t have enough force, given the leverage of the stanchion,to pull the stanchion out of the bulwark…for what it’s worth.

Amen! I had a very similar experience pulling in a reef in the Abacos and was a heartbeat away from going overboard in conditions that were “not bad enough to warrant wearing my harness.” I am a great fan of the BCC’s deck and bulwark two point stanchion mounting system and consider it the most robust of any that I can recall in many years sailing a variety of boats. Even so, I recently read somewhere that the Pardeys go a step further and rig a chest-high line from the upper fitting on the gallows frame, forward to the shrouds – gives a potentially very useful hand grab if all else fails I like that idea a lot and plan to use it, especially when single-handing.

Best to all,
Scott

Having been saved from going overboard by my
lifelines, I would encourage you to install them.
An unexpected wave,out of sequence, while pulling
a second reef knocked me off my feet. Even with
my harness attached, I would have been
overboard…since then, I only work at the mast
from the weather side.

Also, while we have very sturdy bulwarks, I’m
not sure that an accelerating adult body wouldn’t
have enough force, given the leverage of the
stanchion,to pull the stanchion out of the
bulwark…for what it’s worth.

I haven’t ordered any stanchions yet. The reason why I brought the subject up is that I noticed on the Lynn-Larry Pardey cutter the stanchions are not mounted to the deck but rather on the bulwark. It appears they are mounted about 2 inches above the deck in the corner of the bulwark rail and bulwark rib that attaches to the deck. It looks like it’s through-bolted and sure makes the deck look less cluttered in my opinion. As far as strength is concerned it sure would stop a body from going overboard when stumbling or other, and if the weather was extremely bad one would (hopefully) be attached to a separate jackline as well.

OK, thanks Lanny. As the famous author Tristian Jones once said, “one hand for your
boat, one hand for yourself”. I have been swept overboard, even with
stanchions. A tether works best for me. I don’t see that I’d ever bet my life on
stanchions to keep me from going overboard. They are only leg high anyway and
you’d really have to make a precise grab if you were on your way over, which is
something I was not able to do. But, they do make the boat look more complete
and modern and safer for visitors.

Anyway, back to the subject. I think I’ll try bulwark mounted. I’d hate to drill
holes in my deck again.

Mark.
I don’t like drilling holes anywhere either. I get a bit nervous when I see someone heading to their boat with drill and bits in hand especially if the boat is in the water. The bulwark and deck mounted stanchions are by far the best. When mounting to the deck you are not really drilling into the deck and core, just into the covering boards and deck and hull flange. Make sure you are clear of any of the plugged bolts that hold the covering boards in place. It will be hard to tell where the hull flange to deck flange bolts are under the covering boards. Our stanchion bases are through bolted and not held in with screws. The flange bolts have sort of pattern so perhaps you can see from the underside where they would not pose a problem in drilling and place your bases in a place where there are no bolts.After drilling be sure to seal the hole in the wood. I usually try to coat the sides of the drilled hole with epoxy and bed with caulking. A lot of care here will pay off in having no leaks below. Best of luck.

just got delivery of some Port Townsend stanchions, they are nice but they come with three holes on the base, which is round with one side flattened. See pic below very pretty but no way really to affix to the bulwark. Moreover when placed on the cover board they form some crazy angles, I suspect there will be some grunt work to “level” them and still no idea how to fix the bulwark connection, any ideas anyone.

I also put a 90 degree angle brnz plate on the stanchion and bolted that to the top rail of the bulwarks.

The Spartan bases had an annular perimeter groove just inside of the bottom plate edge as well as a large relief area to entrap the 5200 calk when tightening down the through bolts.
I did champhor all the bolt holes to entrap the 5200 around each bolt shank, they haven’t leaked, yet , Phew !

There will be a way to attach the bottom part of the stanchion leg to the bulwarks, it will just take some “think chair” time to figure out how.

Keep in mind that there are ways to nearly eliminate the risk of water intrusion into your deck core. See the attached pictures.

Installation of all through-core objects in this manner will ensure your core is kept intact.

Best of luck with your stanchion hunt! 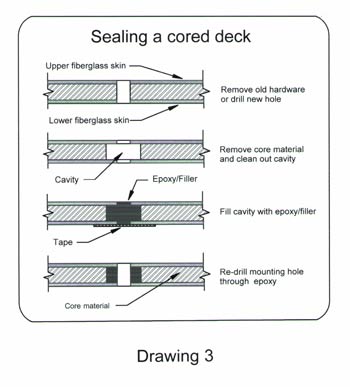 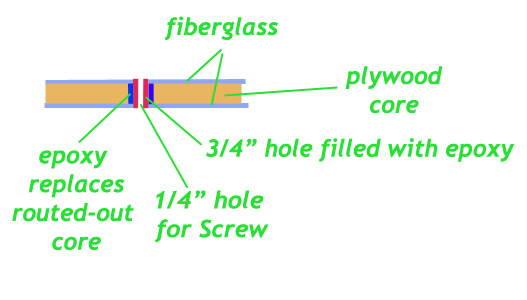 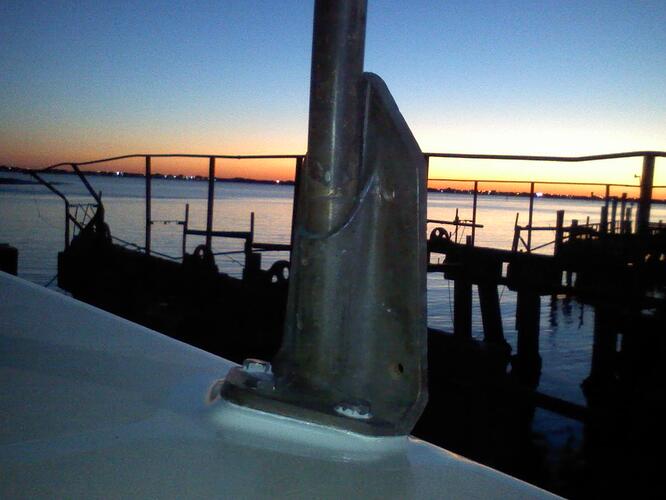 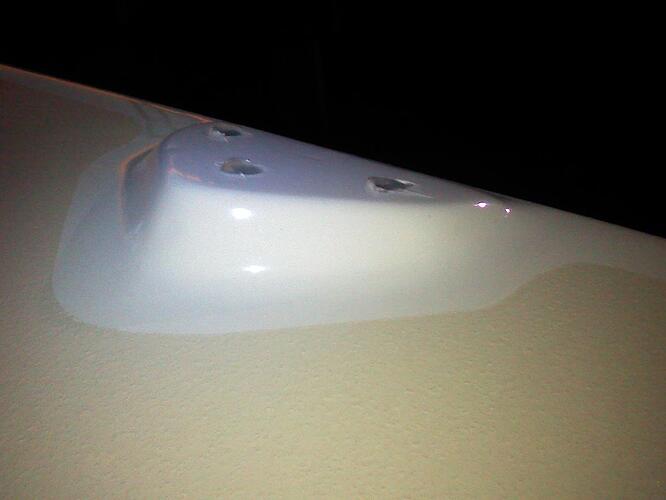 It’s fairly simple to cast an epoxy/vinylester/polyester base for things. The West System’s manual has a good description with pictures of the process. Works for winches, cleats, stanchions, etc. And it’s integral to the boat, so it can’t be crushed or moved, etc.

I’ve also attached a picture of that section of the manual.

Matt, where did you find your stanchions? Those look like what Lanny is looking for.

I had planned on re basing my stanchions in this way after seeing numerous other boats around here with that set up for cabin top winches etc. Now I have an actual picture of the actual part!

I read with keen interest Matt’s explanation of how to integrate the covering board into the deck. I want to do the exact same thing and the timing on the thread and the comments and the images was perfect.

One question though… How long does it take to do one or all of the boards? I’m really pressed for time and am looking for solutions.

I’m considering creating molds from the existing 16 covering boards, something I can do at home… I considered plaster, but am not confident given the water content.