Ben,
I became uneasy when I read on your blog that your gland nut was finger tight! After I replaced the flax in Shaula’s stuffing box, we sailed from the marina to an anchorage several hours away. We dropped the anchor and set it in reverse, as usual. A few hours later, we discovered the bilge filled to within a few inches of the floorboards!! In a BCC, that’s a LOT of water, isn’t it?! At that time we didn’t have an automatic electric bilge pump, just a big Edson and a small Whale. To our amazment, we couldn’t find the leak after we pumped the bilge dry!? The next day, we raised anchor and motored out of the bay, and found that the stuffing box nut was loose enough to let in lots of water!

We decided that the nut loosens in forward, and tightens back up in reverse, so when we set the anchor, the leak disappeared. Although I had 2 wrenches for the stuffing box, for some reason, I had decided to go for finger-tight. Never again!

This happened in North Cove of Kawau Island, NZ, the home of Linn and Larry.
Dan

To have bilge and boat flooding due to stuffing box and shaft leaks is all too common, and has sunk many boats right at their slips.

I got this idea from a female solo sailor, who had just crossed the Atlantic and upon arriving in Europe, was met upon approaching land, by her boyfriend, when he sailed out to meet her.

She had lowered her sails and started her engine, and was motoring into port when she realized her boat was flooding.
Her boyfriend passed her a 12v electric bilge pump, and that saved the day.

Upon investigating where the leak came from, she discovered that the packing gland hose that connects the gland to the shaft log, had slipped forward and off the end of the shaft log.

After that she reccomends that every one put a shaft zinc on the prop shaft next to the stuffing box to prevent a similar occurance in your boat.

I will try to attach a photo of BCC Calliste’s shaft zinc , but for the life of me I can’t understand just why it is corroding , any ideas ? 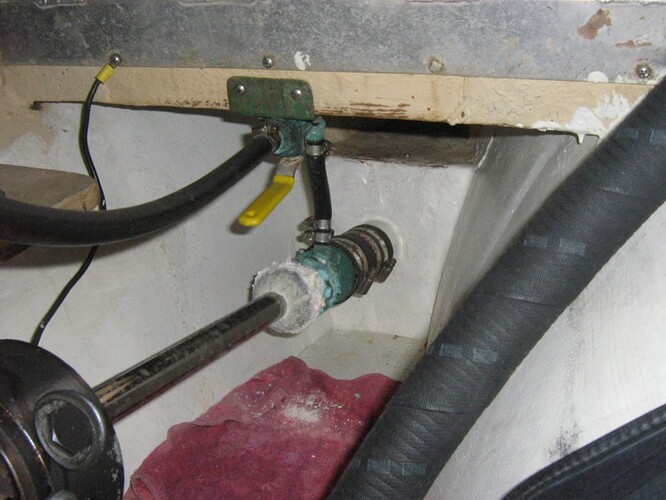 I will try to attach a photo of BCC Calliste’s shaft zinc , but for the life of me I can’t understand just why it is corroding , any ideas ?

As for the corrosion, that’s easy: Zinc is quite reactive. And that’s part of the reason we use zinc as a sacrificial anode.

Each zinc atom has two electrons in outer orbits that are easily stripped away - it doesn’t require much energy for zinc atoms to become Zn++ ions.

When connected electrically to your propellor, those two electrons are free to be ‘gained’ by the atoms in the bronze propellor, minimising the tendency of copper atoms in the prop to become Cu ions.

The forward surface of your zinc anode looks about the same as any zinc exposed to air. That’s not zinc that you’re seeing. It’s zinc carbonate. Zinc is a shiny metal. Zinc carbonate is the dull grey substance that you are used to seeing as clean dry zinc.

The surface coating of zinc carbonate is fairly stable, so it prevents further corrosion. That’s akin to aluminum being coated with a protective coating of aluminum oxide.

But the aft surface of your zinc anode gets splashed with seawater. The slightly acidic seawater strips the zinc carbonate surface layer and Zn++ ions then combine with Chloride ions (and probably a few other ions) to give you that messy white ZnCl powder.

Bil, you meant “a protective coating of aluminum oxide”, didn’t you?

Putting a zinc on the shaft makes sense. I suspect most of us don’t check that aft part of the drive train often enough. I plead guilty. We had some excitement as a result, We were sailing north on the central Queensland coast, started the engine when the wind died, and heard a huge racket after motoring a few minutes. We quickly shut the engine down, and found that the shaft coupler had separated from the flex coupler! Arrggg! The bolts had worked loose (yes, there were lock washers). The spinning shaft and coupler slipped aft enough for the set bolts on the coupler to engage the plywood shelf that the waterlift muffler sits on. Alice sailed on (slowly) while I reassembled things. I filed off the splinters later, and the present view of the wounded shelf is a good reminder to check on stuff back there!

I guess a shaft zinc would have limited the forward shaft movement, but the loose bolts problem would still need to be caught by a careful check of the area, which I had obviously been neglecting.

Bil, you meant “a protective coating of aluminum
oxide”, didn’t you?