I’m looking at getting a new head sail for my BCC and was wondering whether anyone is using a Jib Top and if so, whether they might comment on it.

The Jib Top measurements are provided by Roger in another post.

while the Yankee has these measurements:

I have both an older, soon-to-meet-its-maker genoa and a mitre-cut Yankee in good shape. The jib top seems to offer something in between the two. Here in Japan, it’s usually feast or famine when it comes to wind, and I believe a mitre-cut jib top with its higher-cut offers more flexibility and safety for the conditions. Also, I’m hoping to do some offshore sailing this summer for two weeks south to the Ogasawara Islands, then primarily coastal sailing till the spring of 2012.

Any comments on the sail would be appreciated.

You’ve probably seen the pics Warren, is mine the sail your asking about? This pic shows it, but it’s eased on the sheet a bit, so looks smaller then it truly is. 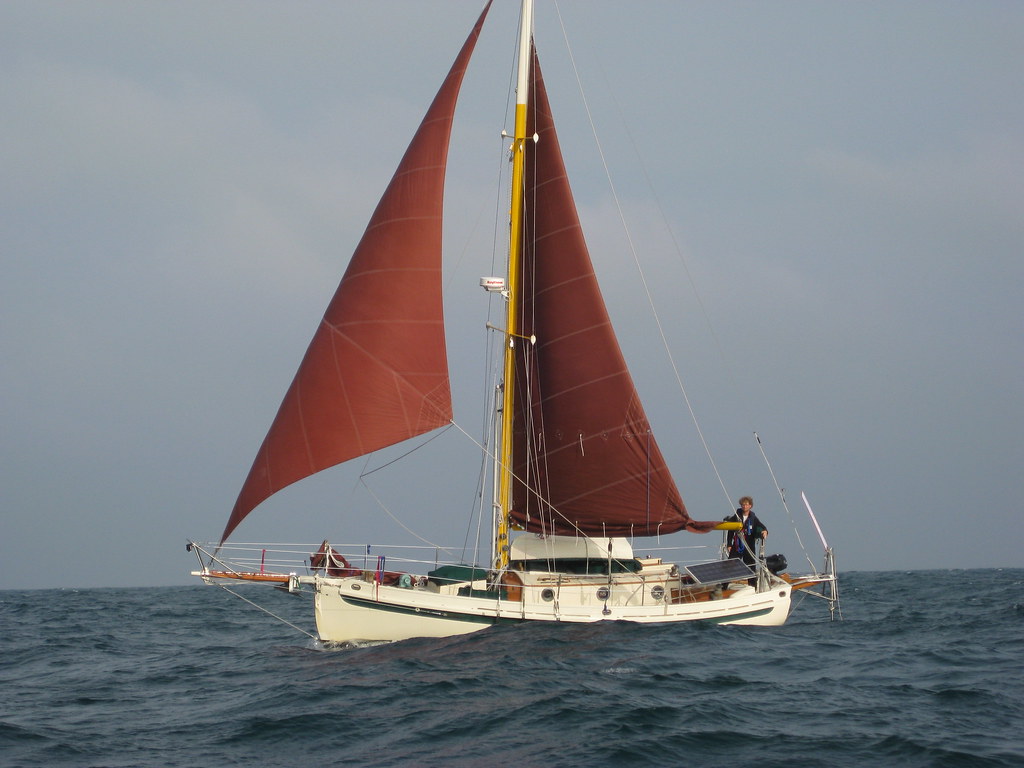 Nice picture, Ben. Yes, that looks like the jib top. Is it your primary head sail or do you also fly a genoa?

It’s decision time and I’m leaning toward the jib top given its lower square footage and hi-cut foot. The winds and the traffic in Tokyo Bay and its approaches are good reasons to go with it. And the mitre cut adds strength and that old-time look I really like about the BCC.

Thanks for the pic.

After I posted, I noticed that the Yankee has a 10" pennant. That’s about what I have on my Job Top - but that’s mostly to get over my lifelines out there. I’ve never measured the sail, so hard for me to tell by just a pic.

It is my main heads’l. I have the multi colored drifter for light winds. The job top is quite adequate, and provides the right balance for me. Stay’sl fills in the gap when needed.

I also have a storm jib … which is a really weird sail to have IMO. In a storm I’d get the jib down and not want to go out on the sprit at all. Stays’l seems to do plenty in a storm. Maybe I’ll use it as a riding sail instead… or just remove it from the boat to make more room for shoes…

Anyone else have a storm jib?

I had one made but have not actually used it which is a good thing. It is intended to be used in place of the staysail if conditions get really bad. It’s about half the size of the staysail and even that may be too large for really serious wind. So I’m glad I have it but hope I never need it to use it.

Interesting - I’ll try it out in place of the stays’l one day and snap a pic for fun… good to know - thanks!

Warren - whats your plan with the job top?

Zygote has a storm jib, which as Ron says is designed to be hanked on the staysail stay.

I wouldn’t want to do a blue water voyage without a storm jib, or a trysail. Having a storm fore-sail (by which I mean something to be flown in the foretriangle and which is tiny and made of heavy fabric with strong stitching) is essential to get the drive to give you power and control in rough conditions.

Zygote has had a few memorable (or forgettable!) occasions in which Lyle C Hess’s design, powered by the storm jib alone in conditions ~50 knots, demonstrated the truth of the saying that a well-found boat will scare you to death and still deliver Mr Hess’s promise to bring you back home.

I’ve decide to go with the jib top and am waiting on pricing for the mitre cut. It’ll cost a bit more with all the panels, but from what I’ve read, it’s a stronger sail than the cross cut. I’m actually getting an entire new suit of sails- main, stays’l, jib, all in 8.3 or 6.4 oz. tanbark and a triangular drifter, so I’m pretty excited about it all and can’t wait to get out on the bay and sail Voyager with a fresh suit of sails.

Damn… another brand new suit of sails on a BCC… ENJOY!!

Perhaps my bag should be labeled Storm Stays’l. Nothing a little Duct Tape and a Sharpie cant fix!