i am having a simrad 32 tiller pilot installed next week. i would appreciate seeing the mounting solutions folks used. unfortunately, i was unable to pull up anything using the list search function going back 1 year.

thanks in advance for taking the time to reply.

We have a Simrad 32 installed. It’s OK for motoring but according to
Simard, it was designed to temporary relieve the helms person for short
periods of time. Reading between the lines, I interpret this as the unit
was designed for light loads for short periods of time. If I were
purchasing a autopilot now, I would purchase a more robust unit, if one is
made for a tiller.

jo anne, Do you have a freehand wind vane? If so its a piece of cake. Other wise check out Rod’s comment.

alas, no freehand. after numerous measurements, photos, and discussions. mike anderson spoke with lin pardey and shared with me that the “only way the freehand will work is if you elongate your boomkin”. given the fact that i had just finished removing all hardware, refinished and replaced same on the boomkin. as well as installing all new standing rigging. the idea of changing the boomkin wasn’t palatable.

so…i need some relieve at the helm while motoring, albeit temporary relief. the simrad 32 seemed the only option and like all things boaty- less than perfect. the installation has been moved up to tomorrow morning and would i like would like to come to the table with some workable ideas for installation.

thanks for the help

Jo Anne,
My Simrad 32 mounts to either one of two locations. Position A is from a Mike Anderson provided bracket bolted to the starboard underside of the taffrail so that the auto pilot drives the Freehand trim tab. I did not have to make any changes to the boomkin. Position B is from a starboard stern deck mounted socket so that the auto pilot drives the tiller directly. I couldn’t find any phot0s but I can take some Monday.

Jo Anne,
My Simrad 32 mounts to either one of two locations. Position A is from a Mike Anderson provided bracket bolted to the starboard underside of the taffrail so that the auto pilot drives the Freehand trim tab. I did not have to make any changes to the boomkin. Position B is from a starboard stern deck mounted socket so that the auto pilot drives the tiller directly. I couldn’t find any phot0s but I can take some Monday.

We have a TP 32 on Itchen, and a photo of the mount setup is attached. We are on our third replacement for previous ones which failed in various ways related to Navico-Simrad’s (apparently recent) admission that they are not engineered to take the stresses of continuous operation on anything as heavy as a BCC in offshore conditions. Just fine for ICW motoring or holding a course for a while while one trims sails or heads up into the wind while dropping sails. To Navico’s credit We had fast and friendly warrenty (and post warranty) service when the previous units self-destructed after a few months of use.

This photo shows the pin mounted on the tiller and the mounting pedestal on the inboard end of the stbd boomkin just forward of the cleat. Also shows various blocks and stopper cleats associated with our Cape Horn windvane setup. My advice is to use a windvane for continuous heavy conditions and the TP 32 for convenient light duty use while motoring or sailing under fairly gentle conditions! 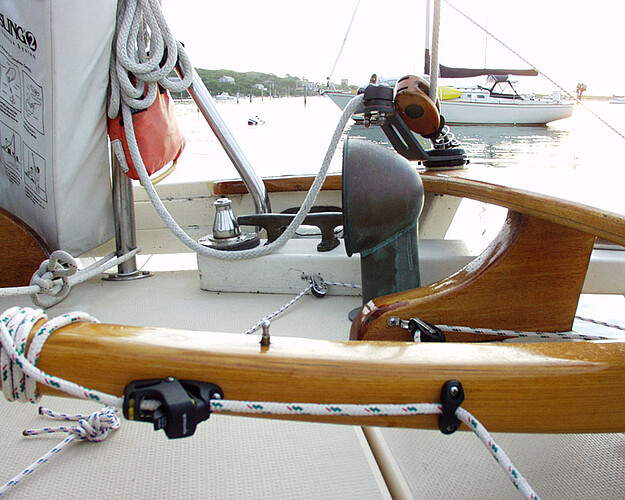 FWIW, I have a Raymarine S1 tiller autopilot, installed very much like Itchen’s. I have used it routinely in heavy seas while motoring, so far with no problems (such as today, in 20- 25 knot winds off the beam/stern quarter with steep, short waves). When I purchased it, I considered purchasing the heaviest duty Raymarine tiller pilot made (I think it may be called the “Grand Prix” or something like that), but the dealer talked me out of it, advising that it was overpriced and the S1 tiller pilot had a “plug and play” replacement motor that cost only $80.

Like Gary, I have a Raymarine tiller pilot. Mine’s an ST 4000+ which works directly on the tiller, and copes with most conditions.
The only time I had problems was last year going through the Straits of Hormuz solo with 24 Kts on the beam.
I had to keep coming back to the cockpit while trying to shorten sail, in order to encourage the autopilot to avoid rounding up.

I’m planning to build a freehand vane with Mike Anderson’s drawings, and if I’d had the autopilot mounted on a trim tab, I’m certain it would have shrugged off the high wind. 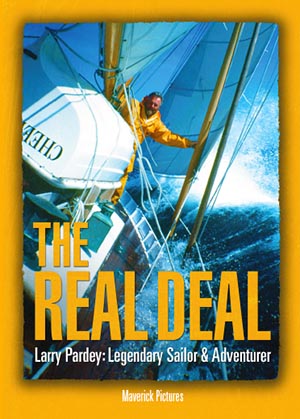