Hi all,
After a mechanic ruined my engine by not tightening the bolts on the oil pump, I am going to put a new engine in.

As of now the contest is between the Beta 25 and the Yanmar 29. Of course I would love a drop in replacement. After studying dimensions I see 2 possible obstacles to a drop in.

The other posts I found didn’t seem to address these 2 issues. Thank you in advance for any insights you all can offer.

I repowered from a Volvo MD2 to a beta 25 eighteen years ago!

My Beta required a 14? tilt, whereas the Volvo was level on the mounts, with the gearbox providing <> 7? angle to the stuffing box and cutlass bearing.

The hardest part was cutting the mount stringers back to the necessary angle.

The Beta provided mounts were flimsy, I changed them out for Vetus.

With approx 4" greater length on the engine, it looks like you might have to reduce the shaft length.

Good news! The length of the engine is 690 mm. The specs I was looking at we’re poorly reproduced and it looked like 590.

So now all I need is an approach for the angle of attack to the shaft.

Have a blast with that! The working area is so confined you need to be anorexic, yet with the strength of Atlas, and the patience of Joab, to do this.

Gary I have heard the Beta running, very quiet, very smooth and has the ability to put on two alternators. Dave Kent put one in and seemed to think it might have been better to put in a 29 hp I believe. I bought the whole engine mounts from CGMW, they come with a ss plate that can be tapped for engine mounting. It might make things more simple. as i eremember it wasn’t that expensive for the mounts.

I did the swap out, at an Alemeda yard, with the help of a Propeller and shaft shop doing the metal work.

I will try to attach a pic of the new motor mount adaption .

The fore and aft angle is a little high at the fwd end , but has caused no problems in over 2500 engine hours .

I definately like that it is easy to drain the oil, and clean the drip pan.

I don’t like the diesel leaks from the engine fuel pump lines at the banjo fittings. My next try to stop them is to remove the anealed copper washers and replace them with nitril reinforced rubber washers . 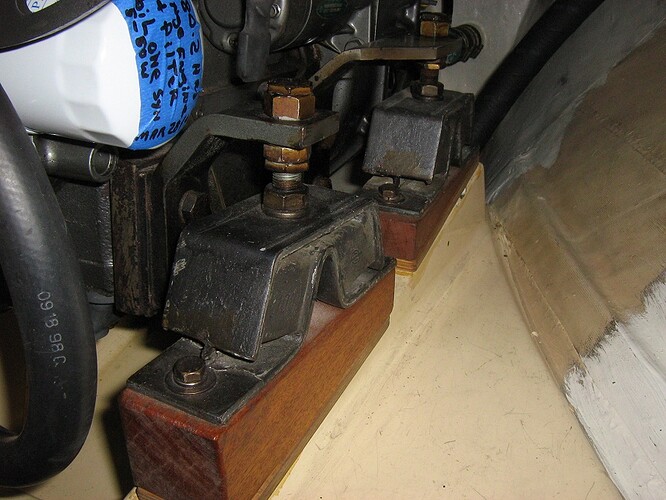 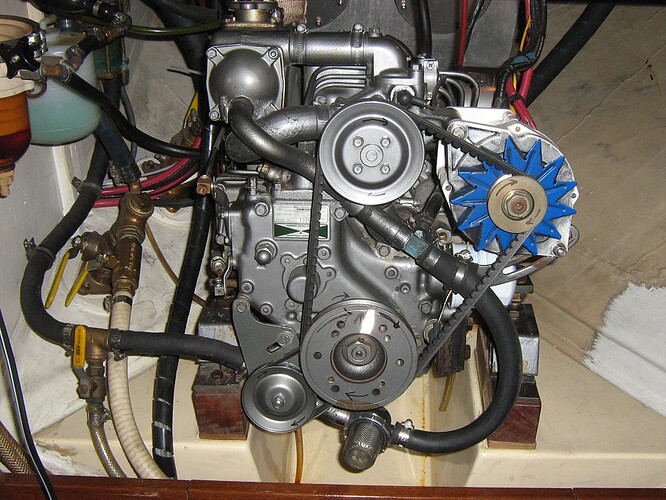 Opps , re-sending this one , 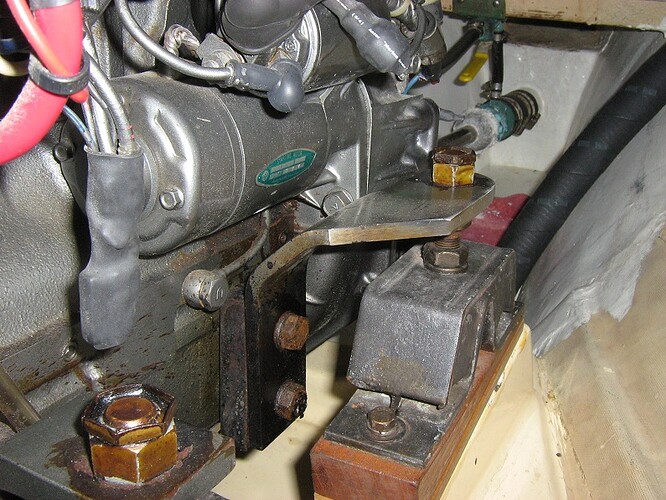 There is also one veryimportant point I forgot to mention; check if the gearbox is clockwise, or anti-clockwise; this could cost you a whole new prop!

One last pic , sorry for out of focus , but this one shows the removable center firewall access panel, for ease of installation and oil changes . 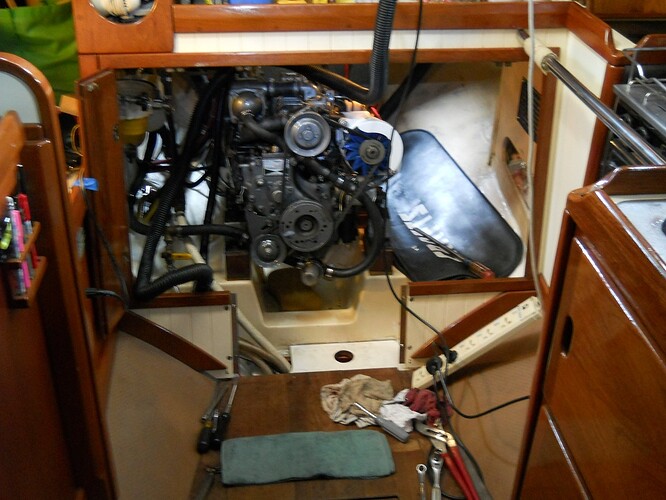 I repowered with the Beta 902. I just uploaded a recent photo to Picasa. I think you can zoom in using tools above the photo. click here

My repower project was a bit different form yours as I was basically starting from scratch We built a poor boy alignment jig to center the prop in the log and then modified the mount stringers for the deeper oil pan and the transmission angle.

Beta made the dual alternator mount modifications including the remote mount oil filter.

I put the first 3 hours on the engine last week motoring across the bay to get to the yard that had my mast and a cherry picker. It is early yet but thus far very pleased with the Beta. We were making 5.9 knots at 3/4 throttle, but some credit should probably go to the new 4 blade variable pitch Maxprop. That said, I liked the compression release levers on the Yanmar I had prior to rebuild. You could start it with an almost dead battery by opening all three, cranking the starter and then closing them one by one.

Let me know if you need any measurements.

looks like I can get a 7 degree down angle trans on the Yanmar too. And there is a Yanmar Dimensions on both Yanmar and Beta are very close. So either one could be a drop in replacement.

Big question right now is rotation. Awaiting answers on Yanmar from local dealer. There is a 3YM30 Yanmar on island. Would have to replace prop for Beta. But then I want one of those plastic kiwi 3 blade feathering props…good excuse to get one.

Gary, I think it’s time you take a walk down memory lane and remember how footloose and fancy free you were on Angelsea, make a Yuloh

tell me about it!

I hate having an engine. I now spend 60-70% of my maintenance time on this damn engine.

But alas, I now have a wife who does not know how to sail. although she is working on that. Plus down here in the Caribbean you can not find block ice on St. Thomas. So I need serious power for a reefer.

And lastly, the resale value. I didn’t get squat for Angelsea since she didn’t have an engine.

But I did have a blast with Angelsea and NO engine. For 16 years!

Ahoy Gary, The rotation on my 3GM30F Yanmar was the same direction from the V 2002.

I saved that 16" prop and tried it on the new Yanny , but it didn’t have enough surface area to load the yanny enough, so over reving was the result.

Also noticed the boat prop apeture was not large enough for the 16" prop and was less than the 20% tip clearence rule, to prevent cavitation.

I also noticed the deadwood hull area under the shaft tube was full of water, it was that “end pour” of resin which the shaft log penetrates, which was porus enough to contain over 3 quarts of salt water, ouch !

So be prepared for surprises, and I would plan to do the swap on hard stand, regardless . 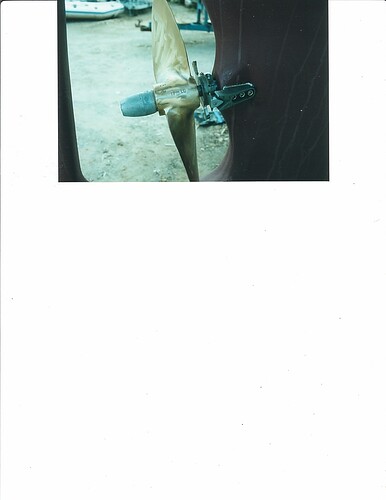 I pulled the trigger this week. Bought a 25HP Beta engine and a 15" kiwi Feathering prop.

The Beta looks like a drop in replacement with a 7 degree tranny and 2:45 to 1 reduction. Will have to upgrade exhaust system from 1 5/8 to 2 inch.

A sweet part about the whole deal was shipping. $300 from S Carolina to St. Thomas in a weeks time.

Now lets see if this works out as well as I hope.

Thanks folks for your input.