Hi All,
New guy here. I have been dreaming of owing a BCC 28 for years. I’m getting closer to my goal.

I’m not trying to be negative, but I am looking for real thoughts. I’ve read a lot on different boats in Bluewaterboats.org and lots of them discuss how they perform under sail, but I haven’t been able to find much on the BCC28. I thought this would be a good place to find that info.

Thanks so much!
Jim Lindberg

I think what I don’t like the most is that I don’t have one, although my FC is a pretty nice ride :). Honestly, I’ve been looking at BCC’s for years but can’t wrap my head around the interior layout. The foreward head? When I cruised Mexico we had a foreward Head and literally installed a seatbelt on the toilet for safety. I’ve been searching for one with a layout like my FC but it looks like it may be a long wait.

The forward head in the standard SLM layout is NOT a problem in rough seas. It faces aft, with cabinetry on both sides for support when heeled. 35 yrs and over 50,000 miles and we’ve never felt the need for a seatbelt. I agree that forward heads that face athwartship need seat belts.

That’s why I got a custom interior. One very close to the Pardeys on Taliesin. With a double up forward.

My biggest peeve about the BCC is the height of the boom. 6-8 inches higher and you could have a standup clearance for a bimini and store an 8’ Fatty Knees.

But that is really about all. This is my second one of this design. I had the Falmouth cutter for 16 years. And when it was time to buy a larger boat there was no hesitation.

Couldn’t you just shorten the back of the foot like on the FC. Now that I have you as captive audience I need help. I have issues sailing to weather in over 40 knots true, not that I enjoy this type of weather but what the… What am I doing wrong my ends are light my sails flat and I’m still alive so I must be at leases a descent sailor. Where have all the FC sailors gone?

Hi Alan,
The boom still sits to low when stowed in its gallows.

40kts is about the limit you can sail with a Falmouth, depending on seas. Got to heave to at that point and go make yourself a cup of coffee with a shot of rum and relax. This is the proper sailing technique.

That has been my experience, I had to learn the fun way

Shaula (1981, 059) didn’t have that problem but I’m not sure if the gooseneck was higher, or the gallows higher and the leech shorter, or some combination.

Shaula has a “bimini” of sorts, the aft side is attached to the boom gallows and the forward side is laced to a SS bow bolted the the cabin side. We can stand up under it and look over the top of the dodger. We love it! 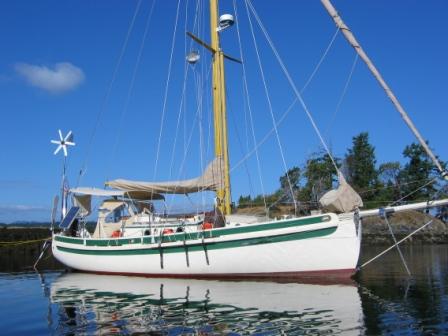 We have hull #16 which was owner completed. She has just 6’0 headroom. At 6’1 what I wouldn’t give for 2 more inches.
The vetus engine is really hard to work way access is currently. A Yanmar or other service from the front engine would be far better. I’m ready to put a hatch in the cockpit sole.
Those are the two big ones so far after a short 2 seasons.

I have had the good fortune to own two of the BCC28’s. I think the boat achieves
exactly what Lyle envisioned. The only negative for me was the fact that I spent too much time painting and varnishing to keep her looking bristol.

The bulwark supports though they add the “look” of a real ship, are a royal
pain to refinish and require a Yoga class to get yourself back in shape. That is my only complaint as an owner.

Other than that, I love the boat.

I totally agree with Mark with respect to the bulwark supports (and the bulwarks). I have owned Dioscouri for 18 years now and I am currently in the process of stripping and refinishing the bulwarks and supports for the second time - I sure hope this will be the last time. It is an enormous amount of work to do the job properly.

I too am doing my bulwarks. I love them, but hate the work. Here in the Caribbean it would be madness to try an maintain them varnished, which is sad. But a nice color scheme and Awlgrip is my current solution.

While many here have spend much, much more time aboard a BCC than I have, I’ve owned three of them and have many thousands of miles and many days aboard. The single thing I disliked was that I could never get comfortable on watch in the cockpit. A day or two was just fine but during extended trips I found the lack of a good backrest in the cockpit to become quite uncomfortable.

Having voiced my single complaint I must add that all and all I simply love the boat !

Lille,
I may have he solution for you. We have two of these and we sail with them sitting on both sides of the tiller. At anchor with the big awning and a iced rum and coke, they are ideal. 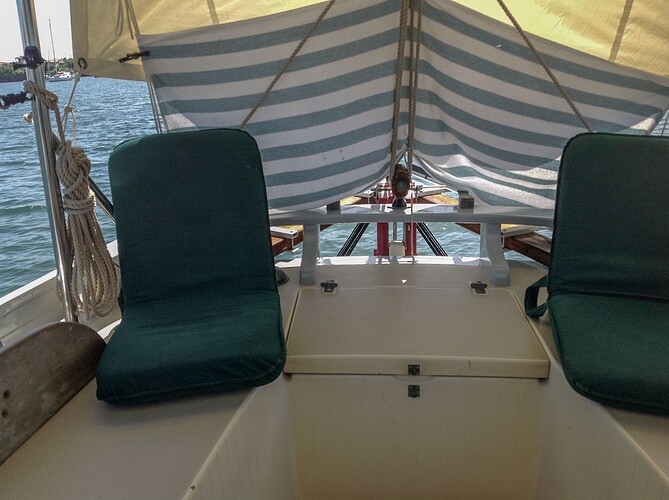 That sure looks comfortable but how do you steer that thing ? Do you realize you’ve lost your tiller ??? ( wink )