Just my luck… ABI went out of business a few months ago leaving me with no source for a chain pipe cap. I’ve sent email to over ten ABI suppliers, but those that responded said, “no stock.” So…

… if anyone has a round chain pipe cap they’d like to sell for an ABI bronze windlass, please let me know.

I’m in Japan and will of course, and with glee, also pick up whatever the postage charges are.

If you can not source a bronze chain pipe cap, you could make one with glass cloth and either vinyl ester or epoxy resin. Another route is to cut a short length of brass pipe and have a brass plate welded or silver soldered to the pipe to make a cap. A third option is to form a pipe from plate brass, weld/silver solder it together then cap it. The last option is to make a male mold and have it sand cast in “bronze.”

I just spoke with Pete Langley at Port Townsend Foundry in Washington State and he has spurling tube caps in 4 or 5 sizes. I have the more recent ABI single speed windlass, too. Mine sits on a platform that allows the bowsprit to slide back underneath. The spurling pipes reach up to the windlass and use the caps you need.

I worry about parts availability, though these are very simple and durable mechanisms. I may try to pick up a used one. Saw one a couple years ago for $650.

He said ABI probably got hit by China’s stockpiling large amounts of copper at very high prices, now lowered by the worldwide recession. He said they were selling the boom gallows ends for $450 retail and he can sell his (better alloy and nicer look, he said, and I concur, having a set from PTF) for $375. But the difference is that he pours to order and doesn’t stockpile most of what they produce. 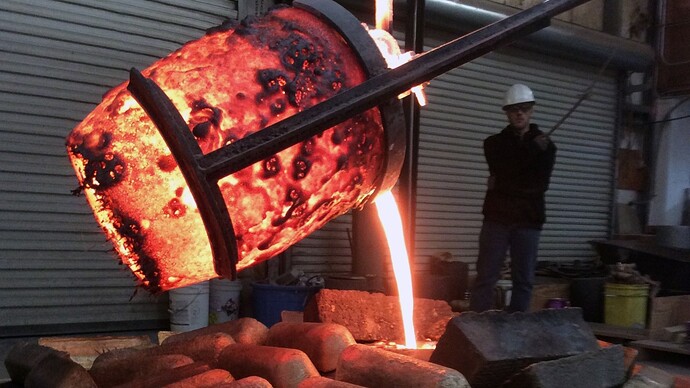 A custom and production nonferrous foundry specializing in marine hardware. Castings are tooled, poured, and finished in-house at our facility in Port Townsend, Washington.

You might check to see if these guys still have some chain pipes in stock. Their site says so.

According to fellow at a local chandlery in Nanaimo on Vancouver Island, ABI is splitting up and expects that their product line will be again offered under a different banner. The Victory line, commonly available in Canada, is made in the same factory and probably from the same molds. I’ve checked their offering (they are a subset of Rekord) but they don’t offer the bronze ABI winch.

Thanks for the suggestion. I checked but no stock.

Good to know. I’ll keep a sharp eye out.

Also, we’re getting ready to modify our bowsprit setup and I’m going to replace my starboard chainpipe (some oval thing without a cap) with an ABI pipe to match the one to port. I just checked with the guys at Greenboatstuff.com and they said they have two left in stock, so you might want to go there.