Galatea (#117) just got a new timing gear case gasket, due to an oil leak caused by a broken and protruding gasket. Replacing the gasket required removing the main pulley, raw water pump, holding the alternator out of the way, and disconnecting and partially removing the fuel injector pump. I was ready to do it myself, except for the fuel injection stuff, which was just beyond my budding diesel mechanic skills. I was charged for 5.25 hours, plus AU$129 for parts.

However, if this happens to your boat and you want to try it yourself, Bil on Zygote found a tech tip on this very problem on yanmarhelp.com, which you can view at http://www.freeboards.net/index.php?mforum=yanmarhelp&showtopic=557. The hook is that the mechanic who wrote it had done 25 of these in one year for a charter company in the UK. Surprisingly, he indicated the exact position of the break in the gasket, which matched ours! It broke right on a bolt hole in the gasket on the lower port side of the gear case cover. At some point, Yanmar developed a new steel reinforced gasket to address the problem.

FWIW, we have 980 hours on the engine commissioned 2001, and I don’t know of any way to predict or prevent this failure. I am glad that it happened one day from Cairns, and not after, when we would have had to decide about sailing back against the trades to get it fixed! I’m pretty sure that we motored less than 4 hours after the break, and lost about a tablespoon of oil in that time, so if it had stayed about the same, we could have limped along for a ways til we could make repairs, though for us, the next stop down wind with a diesel mechanic would probably have been Gove, about 500 miles. It’s a big country down under!

In the spirit of forewarned is forearmed, here’s more detail to follow Tom and Jill’s alert to other members of the BCC-28 fleet with Yanmar 3GM30F engines.

The problem with the gasket at the timing cover exhibits by two signs: black engine oil in the oil pan under the engine; and protusion of the gasket from the lower port side (at about 5 o’clock, looking at the front of the engine). See Tom and Jill’s photo timinggearcovergasketfailure.JPG (75 KB ).

The problem is not a one-off. As Tom and Jill noted, one UK Yanmar dealer (Marine Power Ltd.; Dave Swain, a marine engineer at Marine Power Ltd. runs an informative website and forum for Yanmar owners at http://www.yanmarhelp.com that was originally started by Dick Tucker, who had been Service Manager for a NZ Yanmar distributor) repaired 25 engines with the exact same problem from the Sunsail (UK) charter fleet.

For speculation about the cause of the problem, see section B at the end of this post.

B. Speculation about the cause of the problem

The protuding gasket implicates excessive internal pressure, from combustion gases leaking out the combustion chamber. The steel-reinforced gasket will likely prevent it happening again. But the newer gasket does not cure whatever is the cause of the excessive pressure.

A compression check on each of the three cylinders will show if any major problem exists. But simply pulling out the oil dipstick and covering the dipstick aperture with a thumb, while the engine is running, will show if combustion gases are blowing by the piston rings (you can do a similar simple test for combustion gas leaking past the valve seats by unscrewing the oil filler cap and covering the aperture with the palm of your hand).

Cruisers (in contrast to day sailors making a sortie from a harbor) tend to idle diesel engines too much (eg when charging batteries) and to run the engine at low speeds (eg around 2200 rpm) to get good fuel economy. Both practices can lead to carbon glaze forming around the piston rings and gluing the rings to the piston, stopping combustion gases getting underneath the rings and forcing them against the cylinder wall to form a good seal.

The glazing problem can be avoided easily: aim to run the engine at higher speeds (2700 - 2900 rpm is not too high; you’re trading off increased bearing wear with reduced carbon deposits). And if running for a long time at low engine speeds, punctuate the low speeds with say 5 minutes at higher speed every hour. Similarly, if you have to idle the engine for any time, give it a 30-second burst at 3,000 rpm before allowing it to cool down again at lower rpm.

If piston rings do glaze and stick, running at higher speeds may free them. In extreme cases, removing the head and physically cleaning the rings and pistons may be required.

Associating carbon deposits around the piston rings with the problem of the timing gear cover gasket is speculation so far! I’m interested in learning more from anyone with greater experience (Marty Chin, where are you?).

Bil (with edits to remove typos and make late additions) 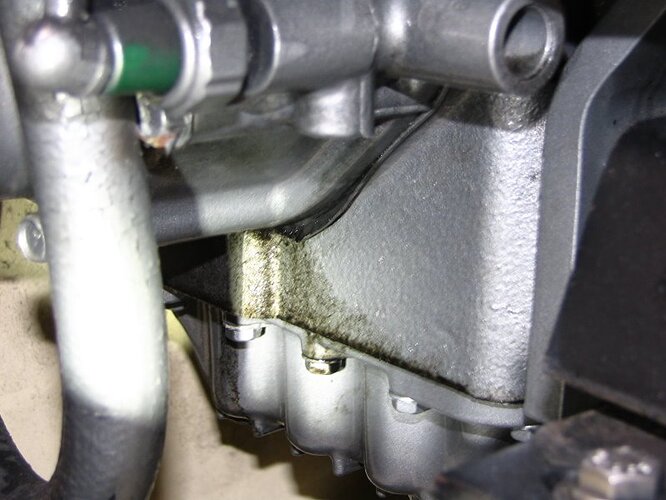 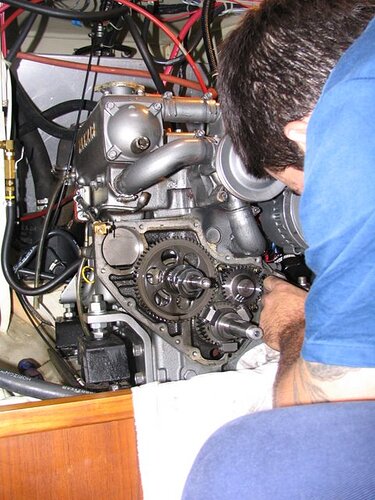 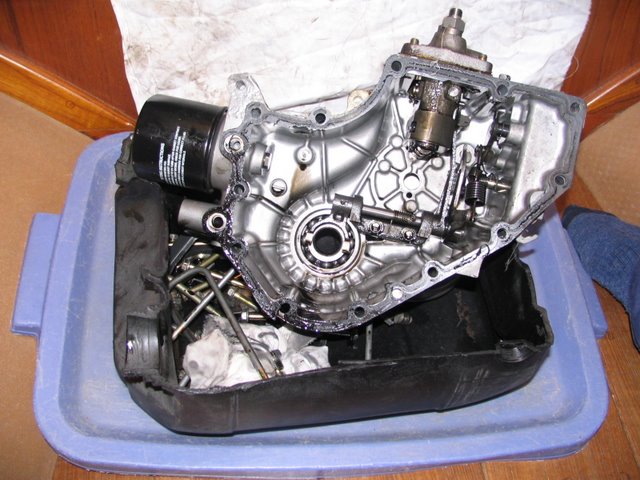 Great, I’m leaving for 5 weeks on Sunday and suspect I won’t have time to replace a gasket. If Bil or Tom sees this in time to answer by about 1400, 30 June, my question is…does the leak get progressively worse or, if I’m willing to clean up the oil daily, can I live with it for 50 hours or less?

I see a little oil under the engine but it appears to be blow-by from the vynil tubes hanging down below the engine.

Living with the problem (ie topping up the oil level and cleaning up the drips in the oil pan) is quite sustainable, as long as you have a jug of oil and oil absorbent material on board.

Make sure no oil gets into the bilge and keep an eye on your local environmental-regulation enforcement officials!

Took me a few minutes …

?vinyl hoses hanging down from the engine?

The clear small diameter vinyl hoses are for draining coolant from the engine and heat exchanger, no? Engine oil should NOT be able to drip from them.

If you’ve black engine oil in the oil pan, it has to be from the oil filter, the timing gear cover gasket, etc. You should see a trail of black showing from where it comes (see Tom and Jill’s photo showing the protuding gasket: you can see the typical show where black engine oil has leaked).

So we now know of two Yanmar 3GM30F engines in the BCC fleet with failure of the timing gear cover gasket; two North American boaters (not BCCs) reported to other fora (see http://forums.torresen.com/sailing/viewtopic.php?f=8&t=1764 and http://www.marineengine.com/discus/messages/12498/14010.shtml); and the 25 engines in the Sunsail (UK) charter fleet. I guess many more failures are out there (and perhaps more waiting to happen?).

All the reports, seen by me, of failure of the timing gear cover gasket involve Yanmar 3GM30 engines built in 1999 - 2002 in Europe by Yanmar Marine Engines B.V. (ie the engines have serial numbers starting with the letter E).

The Yanmar 3GM30 engine is solid and widely used - while we have the marinized version, quite a large number are in use in East Asia powering agricultural machinery (rice paddy harrowers and planters etc).

The discussion on the www.marineengine.com forum included a post reporting that the steel-reinforced gasket is used in the industrial/agricultural engines (so why wasn’t it used in the marine engines?).