I’ve been doing heat exchanger maintenance and wonder if others have had similar experiences. The workshop manual doesn’t give much in the way of detailed help.

The first problem was not being able to remove the heat exchanger cylinder from the casting after removing the end plates. It wouldn’t budge from either end when I tapped it gently. My Yanmar mechanic advised me to use a hammer on a 2X2 block of softwood and pound it alternately from each end (and forget gently), This worked great and didn’t damage the alloy tubes that stick out about 1/16" from the bronze end pieces.

There is some scale inside the unit on the outside of the many alloy (Cu/Ni?) tubes (visable through the entrance and exit holes in the cover). The insides of the tubes (which carry the salt water) look clean. The mechanic says that the scale can develope if the freshwater and anticorrosion/antifreeze aren’t changed regularly. I confess to not changing it often enough during the engine’s 20 yr life–maybe every other yr instead of every yr.

The mechanic told me that early on, Yanmar used aluminum for the cover of the cylinder. He said that some years ago, when the radiator shop put a unit he gave them in the caustic bath overnight to remove the scale, the aluminum cover had dissolved away the next morning! He thinks they may be able to use ultrasound now and avoid the problem. The cover on my 1988 unit is aluminum, and some corrosion on outside where it contacts the casting that it fits in to, was what caused the problem in removing it. I’ll talk to the radiator shop next week. I haven’t been having overheating problems, so the scale build-up hasn’t degraded the heat exchanger yet, but I hate to put it back together with the scale there.

By the way, the big fat O-rings (about 10 yrs old) on each end that keep the saltwater and freshwater apart, were fairly hard and triangular in cross-section and probably should have been replaced sooner.

Has anyone delt with the scale problem?

The best acid for removing scale is citric acid. It will react with the scale and remove it but it does not react with metals such as steel and aluminum. Acid strength should be about 5% by weight - about pH 2.5. Phosphoric acid is also sometimes used. The key is the right pH for the metal being cleaned.

I image a radiator shop will be able to clean your heat exchanger without damaging the aluminum.

It’s time to update this thread. At the urging of the local (very respected) Yanmar mechanic, I took the heat exchanger’s tube assembly to the very respected radiator restorer. This place is THE heat exchanger outfit in the region–they do the ferries, the tugs, and pleasure boats. I mentioned the problem of the aluminum cover, and they said “no problem”. They knew how to handle it.

It turns out that an apprentice working there didn’t know, he put it in the big vat of acid, and it fizzed. Ooops! They were determined to do the right thing and decided to have a new one built by an outfit that just builds heat exchangers. Two weeks later, I picked it up, and this one is made entirely of Cu-Ni. They only charged me the cleaning fee ($70), although they said it cost them $900. It looks great, and today I got it all back together, and it all fit, and worked great. All new O-rings and gaskets, so no more leaks, which is what got this all started.
Dan 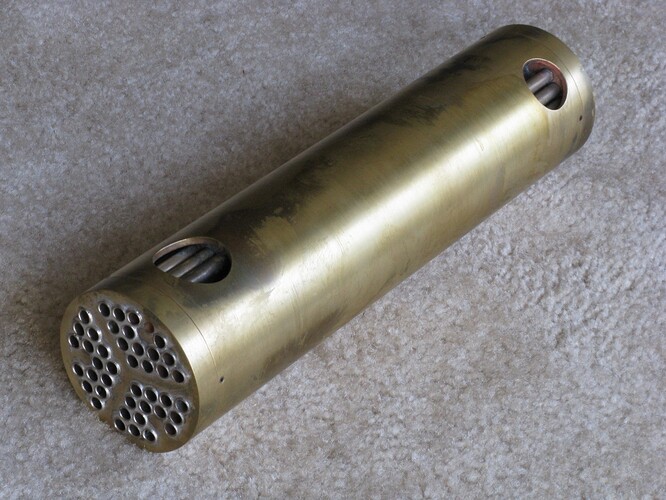 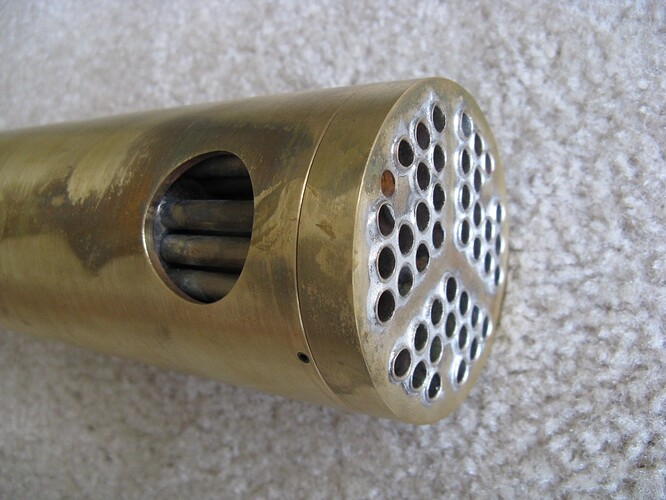 Wow – nice! I wonder if the apprentice got the boot