i am planning to send mike anderson a template/dimensions to manufacture the lower unit for a freehand wind vane in january 2011. it is my understanding that if there are any other falmouth 26 or bcc 28’ers who are interested to hook up we can lower the price. so that being said… if anyone has any interest please let me know.

My Freehand vane sat for four years until with the assistance of TAKU Marine, Brion Toss and PT Foundry it was finally installed. A week of sailing in the Gulf and San Juan Islands confirmed what other owners have known…form and function are beautifully married! An issue that needed to be overcome on Terrier was her bronze sockets on the rigging. The FreeHand is designed for more modern terminals, hence we went to a bronze rod between the backstay and boomkin, making for a fairly simple and complimentary fix. With my very limited experience I cannot speak too highly of Mike Andersons’ FreeHand wind vane.

“Terrier” loves her Freehand vane. Is there a consensus out there about the Freehand’s effectiveness compared with the various servo pendulum models? I have an old (1980s vintage) Fleming that came with “Gertrud” when I bought her. The vane was badly installed and wouldn’t work. I’ve taken it off and am torn between re-installing it properly or buying a new vane - perhaps a newer Fleming, a Monitor, or a Hydrovane (the latter very pricey). But I like the idea of the Freehand - its neatness and the fact it fits so well with the outboard rudder. Any views on relative performance?

Hi Jo Anne , do you know if your rudder is a Foss Foam core rudder, or is it a solid wooden one ?

my rudder has a foam core.

Where are you located? I removed the Monitor windvane from my BCC, with the intention of replacing it with a Cape Horn windvane (which I bought some time ago, but have yet to instal). As a result, I have a Monitor windvane configured for a BCC, which is doing nothing. I have not dealt with this yet, partly because of the hassles of shipping.

Hi Jo Anne , my Foss Foam rudder gave me some trouble, so if or when you install the Free Hand, you will have to be drilling holes through it.

When my rudder was installed at the Morse yard, they installed copper compression tubes thru the rudder and around the bolts where the Oak wood cheek bolts went through.

These copper compression tubes became unbonded in their rudder holes, and allowed the rudder to move a bit, causing a clunking sound while underway.

On closer inspection the copper compression tubes were not epoxyed in the drilled holes.

The repair consisted of hogging out the foam on the inside of each hole then filling the enlarged , entire hole with epoxy and cabosil, then when dry, re-drill the holes and replace the bolts with out the compression tubes.

This seems to be a standard repair on most wood or foam core fiberglass structures.

I also did notice that the foam core was quite moist, probably from water seeping into the core, and that caused high moisture readings on my moisture meter.

I also had a heap of trouble re-installing that rudder on the boat while in the water at the slip , as it was soooo buoyant, it took 3 diver weight belts lashed to the bottom pentil to sink the rudder to close where the pentils could line up with the gudgeons, then a real struggle for two men to direct it and set it into the gudgeons, an experience I am not willing to try again.

Mike Anderson gave me a demonstration of the Free Hand system on his boat Tansy Lee, it worked a treat, and was quite simple and enjoyable to use.

Hi Gary , I am in need of a Monitor windvane water paddle, and hoping to purchase a used one.

If you or anyone has a spare one for sale, please let me know .

I’m on Salt Spring Island so we’re very close to each other. Many thanks for your offer of the Monitor. However, by chance, a few hours after I posted my first message, a friend here on the island offered me his Hydrovane cheap. I think I’ll go for that since I’ve used one before and thought it did a terrific job. I haven’t heard of a Hydrovane being fitted on a BCC before, but maybe someone has done so. I found its biggest advantage was its ability in light air when a servo-pendulum just won’t work. The downside is the expense (which it seems I’ve gotten around), the necessity of making the installation bullet-proof because of the huge stresses involved, and, in the case of a BCC, fitting it on the boomkin or off-centre without the backstay getting in the way.

Hope to see you and “Dioscouri” sometime.

when we pulled the rudder to rebed and replace the delrin bushings we found that the glass under one of the pintles was snap off thin. a repair was done. it’s nice and beefy now, but i did have the opportunity to see the core. but after the bushings were replaced and the rudder rehung it was binding. it was found to be out of alignment. my boat was built by russell yachts- so probable not a problem you sam l morse boaters have experienced. in any case it was realigned beautifully by jim alton in titusville and now moves easiy with the touch of a finger! and i know that cause she is still on the hard

although i am looking forward to being able to feel it in the tiller when she is launched this spring!

Derek,
Late last year you talked about installing a Hdrovane on Gertrude. Were you able to install it inside the bumkin or did you have to go off center to stay away from the backstay? Would love to see a photo and/or hear from you re the installation project in general.
David Kent
Rose

I got caught up in other things - mostly work - and am no farther ahead than I was last year. I still intend to fit the Hydrovane, however, and will post a report when I get my posterior in gear. Preliminary measurements last year seemed to indicate the necessity of fitting the vane either on a custom fitting of some sort attached to the aft end of the boomkin, or to one of the arms of the boomkin off centre. An inside-the-boomkin installation looked as if the vane would bash the backstay at some yaw-adjusted angles. But I’ll know for certain soon.

Thanks Derek. I’ll do a bit of homework re Hydrovane on outboard rudder boats and report back if I learn anything.

I have decided to attempt build a Freehand, and to that end have recently bought the drawings from Mike Anderson.

With his advice I hope to be able to put the whole thing together myself.
I may have a bit of a search in store to find bronze plate, but I can get bronze cast and milled within a few miles from here.

This place is full of small engineering workshops and a couple of little foundries who will take on most small jobs.

We have a waterjet cutting machine in our factory, and so I should be able to cut out all the flat stock according to Mike’s drawings.

I’m really looking forward to getting my teeth into this little project, and if I’m successful, in due course,should anyone be interested, my Windpilot Pacific will be for sale

For Bronze plate check with Alaskan Copper. They have shipped to me in NY
but are located in Seattle and Portland.

I built my own backstay windvane for BCC #4 before I went on my cruise. It was a fun project - I had only seen one for a few minutes, and I just made it up as I went along using aluminum plate and delrin blocks - I was a poor kid. Lots of sawing and filing.

The trim tab had been pre-installed by the previous owner - according to Len, the boat had been used to develop the prototype of the backstay windvane back in '81 or so. The prototype was interesting - nothing like the final version you see now, and was made of temporary materials. It could not be saved, but I have a small part of it on my desk as a bronze paperweight today. Total cost was about $50 for scrap aluminum, some wood, delrin, sailcloth, and grommets. Never failed to steer the boat.

I have attached a couple pics - you can see a dive weight clamped on as a counterweight after my custom cast lead block came loose and fell into the Pacific. Note that it sits on the top of the turnbuckle, taking advantage of the delrin bearing surface riding atop the very smooth cone-shaped turnbuckle. More friction than you want, but it always worked so I felt that a special bearing was not required. The top bearing was just a split delrin block between aluminum plates.

Perfect? No - but I went simple and I went now. Good luck with building yours! 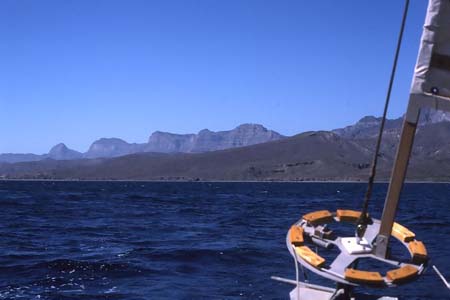 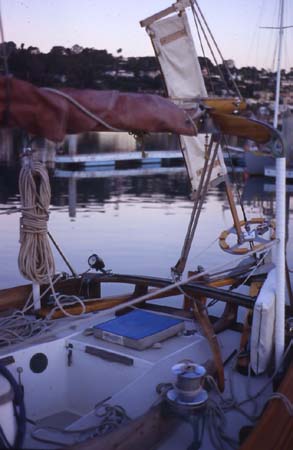 Todd, Drew,
Thanks for your helpful comments - the resourcefulness of the BCC owners is demonstrated yet again!

On the subject of ‘going now’ I made a solo trip a few weeks ago up from Dubai around the Straits of Hormuz, and down the East coast of Oman and the UAE to the Six Senses Resort at Zighy Bay. (Google it!)

It was the weekend of the Supermoon, and I went solo and non-stop from Ras Al Khaimah to Zighy Bay in 22 hours.
It was quite a ride, with 24 knots overnight on the beam going East, and then on the nose when I turned South.
I know I digress from the topic of this thread - maybe I’ll do another post later with some photographs…

Nice locations. My suggestion of Alaskan Copper might not be as helpful on
the other side of the world. : )

Here is a pic of the trim tab and castings - note the crude but effective “semi-balanced” trim tab, the delrin bushings, and rest of the assembly. Remember, I just wanted to go cruising, and the difference between this and an airfoil was going or not going. Oh, and that old outboard you see in her first haulout photo was quite a joke. Spent the next few weeks in the yard putting in a diesel. If I can find a pic of the prototype vane, I’ll post it - it was a very odd duck that put the vane way higher up, and used a long fiberglass tube that fit over the backstay. A jibe took most of it out. 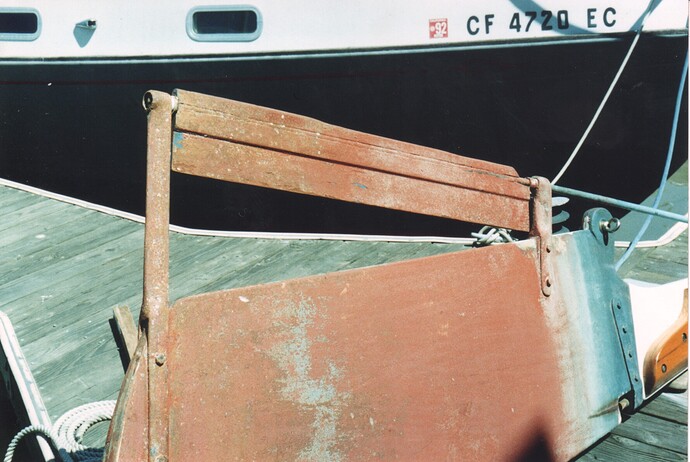 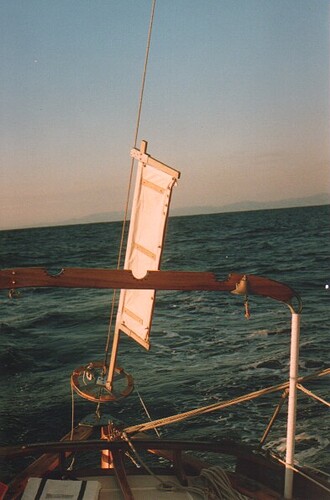 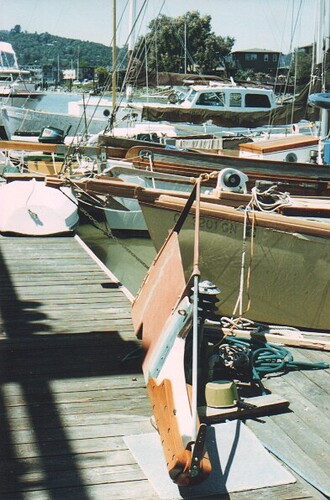 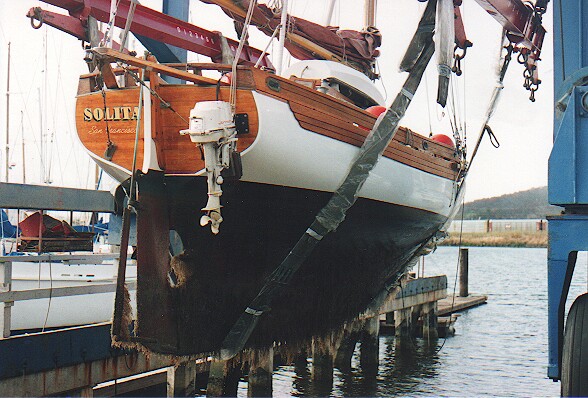 Here is maybe the only surviving pic of the prototype for all of the backstay windvanes. It is a bad pic because it is a scan of a very tiny part of a slide (about 1/4" wide) at a scary dpi, and the film grain shows. There is a long fiberglass tube leading to a lower support for the vane - the vane is missing - then another upper support for the top of the vane. Very high up. There is a bar, rather than the more stylish wheel, at the base. I think the bar would work just fine. I could have repaired this, but the tube would not slide over the hand splices I used later, and it was a bit broken. This was taken only a few weeks after I bought the boat and moved aboard.

Just more ideas for the DIY crowd, or folks who were as poor as I was when I set out. 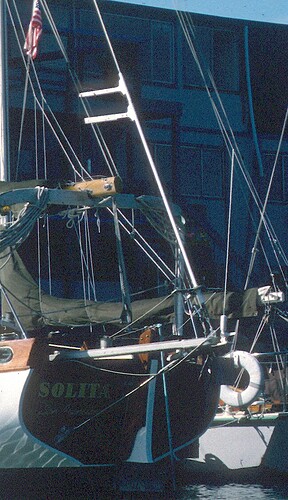