I am refinishing my bulwarks and have therefore removed the lifeline stanchions (which likely require re-bedding in any event). As you know, on the BCC (at least the U.S.-built boats) the stanchions are secured to the bulwarks. With this arrangement, is it necessary to have backing plates below deck? I notice that there are no factory-installed backing plates (just washers). I could easily fabricate some, but I’m wondering if they’re really necessary. Any thoughts?

Ahoy Discouri , sorry that I am a bit scattered these days , meaning that I can’t get my hands on my puter photos, at least not all that will show, what I did on BCC Calliste, for her lifeline stanchions.

Well, to start with I ordered 29" stanchions custom fabricated of 316 SS thick wall and had f/g solid rod shoved up inside the tubes, inorder to reduce a bending potential .

I used Spartan bronze stanchion bases, and fastened each of the 4 corners with 1/4" silicon brnz bolts, which I used brnz plates on the inside for backing plate . I will try to attach pics, ???

I lost a few stanchions in a Tsunami here , the bolts gave way , the deck and coverboard were little affected, again will try to attach a pic. 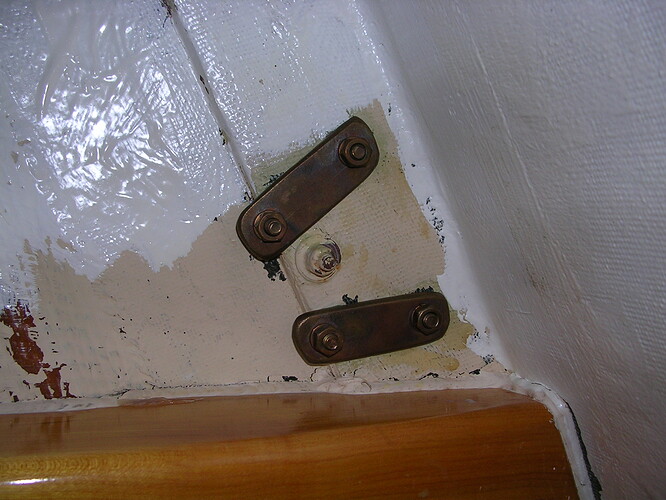 Ahoy Discouri, in short I agree with Rod.

A longer answer comes from the experience of my boat going thru a Tsunami in a marina.

Before setting off cruising, I decided to replace the factory SS stanchions and their welded on bases.
I chose Sparten Marine Brnz bases, and 1" thick wall 316 ss tubes, with internal f/g reinforcing rods.

The Tsunami damage caused a few stanchions to break off or get carried away, a couple just bent at the boarding gate.

I hope the attached photos tell the story . 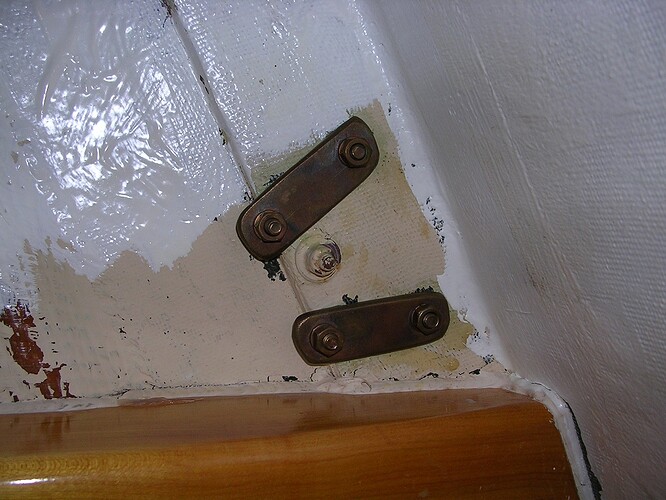 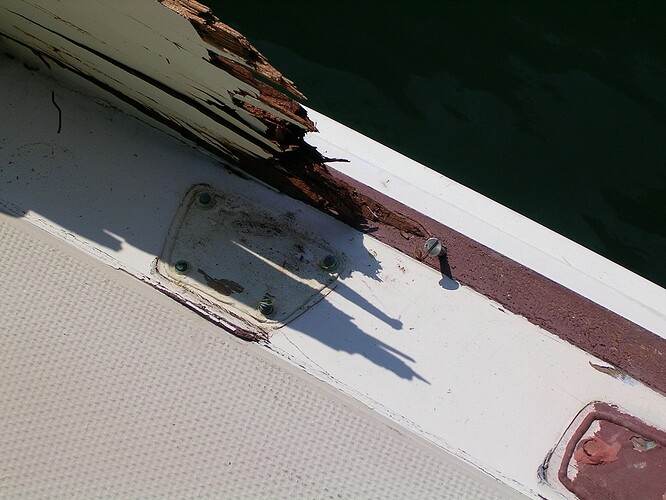 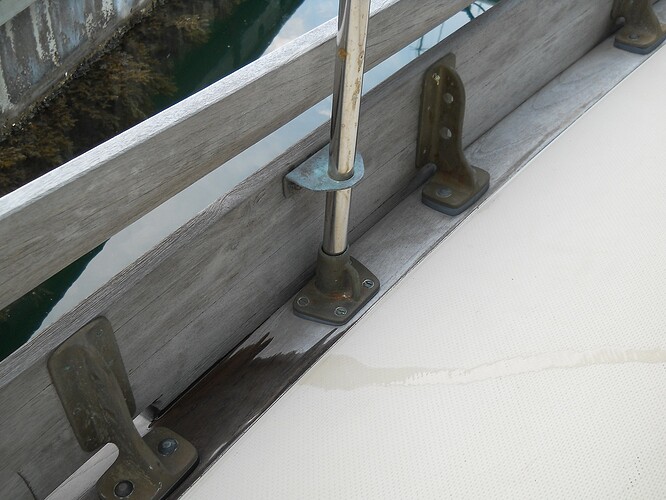 Wasn’t able to include the broken-off photo attachment in my post, so trying to include it here . 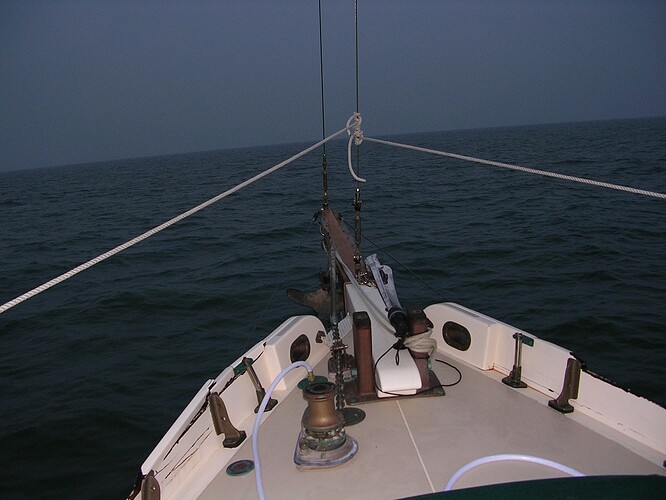 I would not have believed the stanchions could break had I not seen your pictures! Thanks for posting them.

Where did you get the bronze brackets that secure the stanchions to the bulwarks? I did not see them in the Spartan Marine cataloque (perhaps I missed them).

My wife and I have just finished a rather extensive restoration of a wooden BCC and used G10 for many backing plate locations. Our boat is full of bronze where is shows and its cost and beauty are warranted but the g10 is great stuff for strength, light weight and lower cost in place where it will be painted. 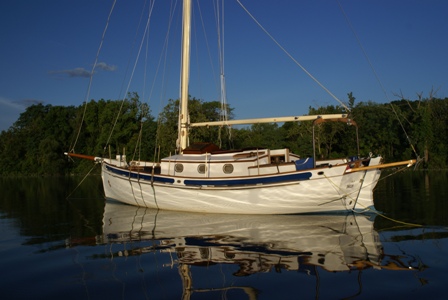 I hadn’t finished my note when I accidentally posed it.

G10 is very strong solid plastic. I first saw it used in an article in wooden boat magazine. You can buy it from McMaster_Carr under the name Garolite. It can be worked and sanded with wood working tools and takes paint well. It will dull non carbide tips. It comes in all kinds of shapes and sheets and thicknesses. I have used it in all kinds of places where incredible strength is needed.

I would definitely use a backing plate on the stanchions. Essentially when someone falls against the stanchion it becomes a 30" crow bar trying to rip the washers through the deck.

We used G10 at the base of the mast step and had the dealer cut the 1" thick piece with a diamond saw. It’s a glass-epoxy laminate formed under heat and high pressure. The material is super hard and will dull tools quickly.

No, that’s what happened to Douglas’s Calliste when she was caught in a marina by the tsunami of 26 December 2004.

If you dig around, you can find posts in this forum recording the disaster, as the multiple wave trains of the tsunami turned the basin of the marina, in Langkawi, Malaysia, into a chaotic washing machine.

If you’re into hurricanes, check out John Nelson’s blog at UXBlog | IDV Solutions' User Experience: Hurricanes Since 1851 and choose which size of his poster that you want for your desktop from http://www.flickr.com/photos/idvsolutions/7840356344/sizes/l/in/photostream/

John Nelson has also done neat images of tornado track maps across North America and sea trade in the Med.

My stanchion bases are Port Townsend Foundry issue backed by fender washers but not attached to the bulwarks. When my boat went over the harbor wall starboard side first 4 of the stanchions bent past 90 degrees. I was surprised that none of the bases moved and none of the stanchions broke. I found a few represntative photos:

My picasa photo album is getting pretty big but I think these will pop up:

Wow, what beautiful work and the detail is incredible. Looking at your boat makes me want to rebuild our IDUNA.

Gee Gosh , David , I again Agree with Rod , and at the same time , you are creating a valuable traditional, asset, with your attention to detail, on the restoration of S/V Rose .

T Y , Bil for explaining that Tsunami damage to all, don’t we wish we had that split lazerette hatch cover, as well !

David, it amazes me that you are able to give so much of your time, skills, energy, and money, to re-build her, my hat is off to you , “Good On You Mate”, as they say in Oz.

I think your choice to re-build her is a good one, as I have always had a heap of respect for her prior owner, Wootenw0lly (sp-?) , and his choices of bronze hardware, for her.

As for the brnz upper stanchion brackets bolted to Calliste’s bulwarks, I just fabricated them from silicon brnz plate stock, and didn’t order them.

Thanks for kudos,guys. I sold my company and retired about the same time that my boat was asking for lots of my time and money. My contribtion to the skill sets is far more limited. I’m in charge of purchasing, payroll and sweeping up after work. I have a magical fiber glass and carpentry hand and I taught Jorge the house painter how to varnish (I have not told him he could triple his price by putting the word “marine” on his business card).

Fun project but looking forward to rejoining the ranks of sailing BCCs. Almost there.

Well David you are showing us all how to do it, I agree with the guys what a great job. I seem to remember having a discussion with you about how long it takes to do stuff on the boat, that was about the time you were deciding whether you would restore or not. Out of interest any idea how many hours? I was totally skint by the time mine was done I guess your saving grace is the fact you are doing it yourself as a hobby. It’s time to go sailing now…

I’m swagging but 200 weeks at 30 hours per week or 6000 hours must be close. Could have bought a new one for less but then that would have been a different boat.

Hey David , don’t you ever discount , your atention to detail , YES , it takes More , than you ever thought , me , included in that too !

It seems to me , that our boat ownership , is an Adult Education Class . Second To None , but what we get, along the way, is a v precious education , that is NOT available to everyone .